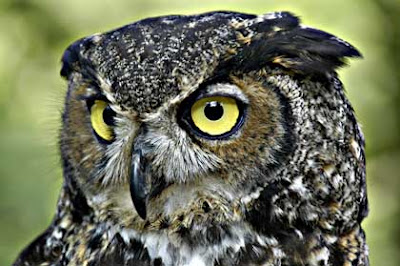 No, as far as I know this isn't the great horned owl we (supposedly) made voice contact with this evening in way-Northern Manhattan's Inwood Hill Park. But I can't say for sure it isn't. Or it could be a relative.

Now you're going to tell me you could resist an offer like this?

Bring the whole family and find out as you roam the winter woods in search of owls with Mike Feller, Chief Naturalist for Parks's Natural Resources Group. It's the beginning of their mating season so you may observe some interesting behaviors. Mike will demonstrate how to attract owls using calls.

From time to time I've noted announcements from the NYC Parks Dept. about nature-themed walks in Northern Manhattan parks featuring naturalist Mike Feller. I've done a bunch of the (similarly sponsored) walks in Northern Manhattan with the staggeringly erudite Sid Horenstein, educator emeritus at the American Museum of Natural History (and I wrote about my adventure with him in Highbridge Park), but I'd never done one of Mike's walks.

Today, finally, I got myself there for the promised Owl Prowl. It surprised me all the more because I'd already done a Municipal Art Society walking tour with Matt Postal -- the first of two walks devoted to "Millionaires' Mile" (which Matt allowed at the outset should probably be renamed "Billionaires' Mile"), this one on but mostly off Fifth Avenue from 60th Street (starting directly opposite the still-imposing McKim Mead & White Metropolitan Club) up to the Frick Collection at 70th Street.

Asked at the outset about our odds for spotting owls, Mike thought a bit before telling us that his record so far on these walks was six for six. Well, now it's six for seven. But along the way we learned plenty about owls, and in particular the great horned owls who have taken over the owl franchise in Inwood Hill Park (at the northern edge of Manhattan, one of our few parks that includes a fair amount of natural rather than manufactured terrain.) Great horned owls, Mike explained, don't like sharing habitat with other species of owls, and tend to terminate them with extreme prejudice.

I learned a great deal about what great horned owls eat, which is mostly live animals -- mice and rats definitely, but on up to skunks and squirrels and rabbits. The smaller animals are swallowed whole, and eventually the indigestible parts are ejected orally in the form of a pellet. Larger animals are torn up for swallowing, perhaps in quarters for, say, skunks. (A tour participant who lives in the area volunteers that in the years before the arrival of the great horned owls in Inwood Hill Park, the park was overrun with skunks, and then the skunks more or less vanished. The connection was "purely anecdotal," she acknowledged, adding that she sure didn't miss the skunks -- the smell was pretty bad.)

It may have been too warm still for owl spotting -- Mike registered surprise at the amount of insect activity still observable in the park at this late date. When he applied his imitation owl-hooting technique, he seemed to get a response from afar, but nothing he could do would persuade the respondent to move from his spot -- a "mellow male owl," he guessed. He ventured that we were having roughly the same effect on him that telemarketers have on us when they call during dinner.

Actually, I wasn't entirely grieving that our mellow male chose to stand, or sit, his ground. (My personal theory is that when Mike started doing his owl calls, the great horneds in the park were texting one another noting that it's probably just that crazy Mike making like an owl. And our mellow male just went back to the book he was reading.)

Whatever. It was a great walk in the park, with all manner of fascinating lore coming from Mike. There was a great turnout for the walk, including half a dozen kids of various ages -- a huge asset to the walk, with their delicious curiosity and enthusiasm. And the nice thing about our having hiked all the way up into the high sierra of Inwood Hill Park on the heading-toward-owl-country leg of the walk was that the return was almost entirely downhill.

Part 2 of Matt Postal's MAS "Millionaires' Mile" series, ranging from 70th Street up to about 78th, is scheduled for Sunday, December 23, 11am-1pm. This is a problem for me, because at 1pm that day Eric K. Washington is starting an "Uptown Trinity Church Cemetery at Christmas" walk, which "precedes the city’s oldest ongoing holiday tradition, the annual recitation at the Church of the Intercession of “A Visit from St. Nicholas” (by Clement Clarke Moore, who is buried here)."

I just did a quick search, and the next walk the Parks Dept. has listed for Mike is a "Dusk Walk with Mike Feller" in Fort Tryon Park on Sunday, January 12, 4pm-6pm.