Urban Gadabout: Out on the water on City of Water Day 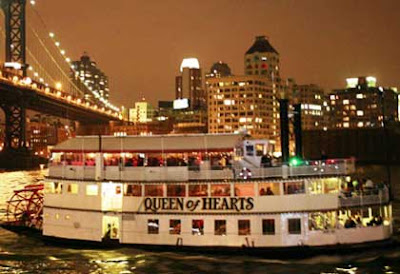 Chilly and shivery,
out on the river, we
found us a corner to chat in,
as we were circling Manhattan,
on the SS Bernard Cohn. . . .

Okay, it wasn't the SS Bernard Cohn, and the city wasn't in lights this afternoon, and we weren't circling Manhattan, but still . . . . (It was kind of overcast, if that counts. That made it maybe a little less hot than it might otherwise have been, but not exactly "chilly and shivery.")

Today was New York's annual City of Water Day, presented by the Metropolitan Waterfront Alliance, a celebration all over the area of the city's roughly zillion miles of waterfront. (Oh, I could look up the number, but would that improve any of our lives?)

City of Water Day is the Metropolitan Waterfront Alliance’s way to bring together everything about the water that is exciting and fun, from port commerce to environmental education to active recreation. The event is a celebration of the potential of the waterfront.

MWA works to transform the New York and New Jersey Harbor and Waterways to make them cleaner and more accessible, a vibrant place to play, learn and work with great parks, great jobs and great transportation for all.

Through our work, the New York and New Jersey harbor and waterways will be alive with commerce and recreation; where sailboats, kayaks and pleasure craft share the waterways with commuter ferries, barges and container ships; where beautiful, cared-for parks are connected by affordable waterborne transit; where there are dozens of exciting waterfront destinations that reflect the vitality and diversity of the great metropolis that surrounds it; a waterfront that is no longer walled off by highways and rails, or by private luxury residences; a waterfront that is a shared precious resource and is accessible to all. MWA is a leadership organization that will make this vision real for our region.

Over 650 organizations that make up the Metropolitan Waterfront Alliance can participate and play a major role in putting on City of Water Day.

When the schedule of events was finally announced, for most people it represented an embarrassment of riches. It was a little dicier for me, since by then I had registered for Matt Postal's Municipal Art Society walking tour "New to New York: Broadway's Cultural Corridor" at 11am, so I needed an event that I could get to in time from the Upper West Side starting somewhere between 1:15 and 1:30. To my relief and delight, I actually found one: the second sailing of the day of a river-eye tour of Hudson River Park, the still-developing park that consists of the immediate shoreline plus an ever-growing number of repurposed or rebuilt Hudson River piers over the five-mile span from Tribeca up to about 59th Street. (North of 59th Street Riverside Park begins its river journey.) The tour was narrated by Nicolette Witcher, vice president for environment and education at the Hudson River Park Trust, which oversees the development and maintenance of the park.

The lovely celebration of City of Water Day provides a striking reminder of the growing role our waterfront has come to play in the lives of more and more New Yorkers. Of course, once upon a time it played an essential, if barely visible, role in the lives not just of New Yorkers but of much the country, when it was one of our leading industrial plants, and city dwellers. While it's still very much a working waterfront, it's nowhere near the not-fit-for-human-habitation miasma it once was.

This week's Time Out New York has a useful little roundup of upcoming waterfront-themed tours on MAS's summer schedule, and if I could find an online link on the magazine's next-to-useless website, I would offer it. In any case, tomorrow I'm going to do a roundup of my own, including a number of other offerings in addition to MAS's.
#
Posted by KenInNY at 6:00 PM