NYC-- A Meal In The East Village 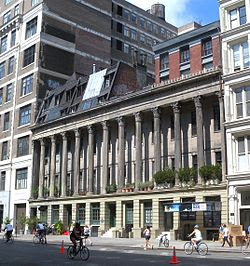 I didn't set out to relive my childhood. I was just going to meet Ken, a childhood friend (the guy who writes about the Gadabouts), for dinner. I had arrived the night before-- just in time for dinner at my favorite New York restaurant, Pure Food and Wine (on Irving Place in Gramercy Park). Ken isn't into vegetarian, vegan, health food or anything like that. So we met the next night and had decided to pick a restaurant from among our favorite Food Network celebrity chefs' restaurants... or his. I ate at Iron Chef Cat Cora's place in the Houston Airport on a layover coming back from the Yucatan last December and it was so abysmal that I would have been perfectly content to never eat in another Food Network star's restaurant again. But Ken gave me a choice between Geoffrey Zakarian's Lamb's Club, a Mark Murphy restaurant and Alex Guarnaschelli's Butter.

I immediately mixed Mark up with Scott Conant, who is an anti-health fanatic so I didn't even bother to look at Murphy's restaurants online. In any case, my favorite Chopped chef is Zakarian, who I think is the most interesting chef between the three. Ken suggested the Lamb's Club and I was leaning in that direction until I saw the menu online, which didn't look very vegan-friendly or health conscious at all. So, by default, it was Butter, in the midst of their 10th anniversary celebrations. Aside from seeing Ken, the best part of the experience was getting there. It's in the East Village, just off St. Mark's Place, where I spent years in the '60s working and playing. The area was like a second home to me. But, my God, it's so changed now. Not just blights like Starbuck's, there was even a Pinkberry's... right on St. Mark's itself. It's funny how wide-eyed tourists are drawn to "exotic" seedy places-- like the East Village-- and then want to make it comfortable for themselves by transforming it into places that cater to people who go for the Pinkberries. It's always that way. But this was my one and only childhood we're talking about here-- where I scored my first weed and where I saw every Velvet Underground performance at the Exploding Plastic Inevitable at the Dom.

And just down the street and around the corner down from Cooper Square on Lafayette is Butter. It's across the street and half a block up from the Astor Place Theater or Playhouse (434 Lafayette Street), another place where I spent an inordinate amount of time. It was 1965 and I was a freshman at Stony Brook, president of the freshman class and I got turned on to the subversive musical missing link between the beatniks and the hippies, The Fugs. I escaped from Suffolk County at every opportunity and hung out at Fugs shows. I hired them for the Freshman Class dance. They got the joke. The captain of the [some sport] team, Bob O'Connor, didn't and threatened to beat me up when his girlfriend was subjected to "kill For Peace" and "Boobs A Lot." That was the first time I was ever aware of having met a Republican. A year or so later I wound up in a jail cell with Tuli Kupferberg, Ed Sanders, (+ Doctor Spock and Allen Ginsberg) for protesting the War in Vietnam. But I never really looked at the plaque on the building housing the Astor Place Theater-- now the home to some Las Vegas commercial enterprise for suburbanites called the Blue Man Group-- until I was waiting for Ken to arrive for our dinner at Butter .

It's more than just a childhood memory for me. Turns out it's an historic landmark for everyone. The building, once 9 row houses on the most exclusive street in Manhattan, only has 4 attached houses remaining. It still looks awesome architecturally. It's a Greek revival building-- known both as Colonnade Row and LaGrange Terrace-- from the 1830s and built by Seth Greer in honor of the Marquis de La Fayette's estate, La Grange, in France. It-- the NYC place currently occupied by the Blue Men-- was once home to John Jacob Astor, an opium smuggler and America's first bona fide multimilionaire. Other residents of the swanky 26-room homes included Washington Irving, Cornelius Vanderbilt and President John Tyler. The street was a cul-de-sac back in the day (theirs, not mine).

Dinner was OK. Ken loved it in fact. My appetizer was among the best-prepared octopus I've ever tried, grilled with harissa, served over a orange and marcona almond allade with heirloom potatoes. Worthy of the long walk downtown. My entree, grilled salmon was far less successful, nothing to complain about but nothing remotely special either. Would I go back? Probably not. New York is filled with better places, although this, unlike Cat Cora's place in the Houston Airport, is certainly a good restaurant.
Posted by DownWithTyranny at 7:37 PM