Urban Gadabout: When east is west and north is south -- travels in the Bronx and Brooklyn 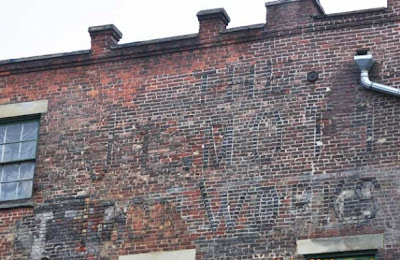 The Mott Iron Works, founded by Jordan L. Mott in 1828, and the source of the name given to the southernmost area of the Bronx, Mott Haven, is mostly forgotten and almost entirely gone -- but this sign remains.

We had just walked across the Third Avenue from Manhattan into the Bronx, and the leader of this Municipal Art Society (MAS) tour, Jack Eichenbaum (the official Queens borough historian, who's actually allowed to venture into the other boroughs), was explaining that when settlement began pushing north across the Harlem River into the neighborhood that became known as Mott Haven, where we were, notably once the Third Avenue El began offering service over the river and into the northlands, in the 1890s, the area was often referred to as Northside, since it was north of New York City proper -- of which it had been a part, you'll see from the Wikipedia note, even before Queens, Brooklyn, and Staten Island were merged into the city in 1898.

As you'll also see in the Wikipedia note, this area, being well west of the Bronx River, is classically "West" Bronx -- and yet, as Jack pointed out, if you look at the street signs for the numbered streets in the neighborhood, you see that they're "East," the north-south dividing line being well to the west, at Jerome Avenue. So the area can be thought of as "north," or as "east," or as "west" -- but is best known to the outside world as part of the South Bronx.

Dealing with similar challenges of urban disinvestment and blight, the neighborhoods of Mott Haven, Melrose, Morrisania were often referred to dismissively as simply ‘the South Bronx’. In recent decades, planning and new buildings have begun to restore their livability. This walking tours stresses renewal in response to basic urban geography.

I've written a number of times about Jack and his unusual perspective as a tour leader a number of times. The unusual perspective is that he is an academic and practical georgrapher. (His website, called "The Georgraphy of New York City with Jack Eichenbaum," can be found at geognyc.com), And his overall description of the three Bronx walking tours he's doing for MAS, which began Saturday with "Mott Haven: From the Harlem River to the Bronx Hub," reads:

Dealing with similar challenges of urban disinvestment and blight, the neighborhoods of Mott Haven, Melrose, Morrisania were often referred to dismissively as simply ‘the South Bronx’. In recent decades, planning and new buildings have begun to restore their livability. This walking tours stresses renewal in response to basic urban geography. Please be prepared to walk two miles and at a brisk pace.

And sure enough, by walking across the Harlem River to Mott Haven, we got to see how Jordan Mott came to locate his iron works there -- on the Bronx side of the river, where the amount of land he needed could be had less expensively, with that easy access to the Harlem and East Rivers for shipping materials in and goods out in the era before railroads. Later we got to see the development boom that came with the coming of the Third Avenue El, and then some of the factors that caused the neighborhood to go into decline in the 1920s. And then how the decline of the area made it an obvious place to locate some of the city's largest public-housing projects in the '50s and '60s boom of such projects.

At the tour's northern end, 149th Street, the area known as "the Hub," still an important shopping district but no longer, as it once was, the central commercial district of the Bronx, we even got a glimpse of the next tour in the series: Melrose. As it turned out, Jack had been so efficient about keeping the unexpectedly large group -- thanks apparently to a mention in the Times -- moving (his tours tend to cover a lot of ground, so he tends to keep his people moving smartly) that we arrived well ahead of schedule, and the "add-on" walk that Jack had planned for those interested in continuing, across 149th Street from Third Avenue to the Grand Concourse, wound up fitting comfortably into the tour's scheduled two hours.

FROM THE BRONX TO BROOKLYN, ON THE CLOCK

Which was great for me, because I had scheduled myself, probably foolishly, for a tour in Brooklyn scheduled to start a mere hour after the official finish of the Mott Haven walk. I'd done it partly because I know Jack is good about keeping to schedule times, and partly because I'd worked out that I really could get from Third Avenue and 149th Street in the Bronx to Park Slope in Brooklyn in the allotted time via the IRT no. 2 train, provided I made the right connection.
And so I peeled off of the group en route to the Grand Concourse and headed back to Third Avenue, which showed my ignorance of Bronx geography. I was so conscious of needing to head south, and not wanting to be diverted in the westward diversion of the tour "supplement," that I remained blissfully unaware, until I got to the train platform, that the no. 2 train in fact heads westward from Third Avenue. The next stop, in fact, is 149th and Grand Concourse!

Nevertheless, I made my train connection and made it to the sidewalk in front of the Montauk Club, once the social haunt of the cream of the cream of Brooklyn society, which was as prosperous as any in the country, comfortably in time for the second part of a three-part series led by another MAS stalwart, Francis Morrone, "Three Ways of Looking at Park Slope, Part 2: Park Slope Northeast."

It was a heavily sentimental day for me, because both Jack and Francis have been so important to my late-dawning fascination with and budding awareness of how the city has developed. As I've written before, I was lucky enough to do a tour that Jack did for the New York Transit Museum back in the fall of 2010 focusing on three subway nodes (Times Square in Manhattan and Queens Plaza and Jackson Heights in Queens), where the crossing of two or more different subway lines played such a vital role in the area's development.
It was Jack that day who turned me on to MAS, and it's no exaggeration to say that the MAS tours have changed my life. (As I think I've mentioned, I was lucky enough to have a chance to say just this to the outgoing MAS tour director, Tamara Coombs. I was pleased and unsurprised to hear that it wasn't the first time she'd heard this.) Since then I've done a huge number of tours with Jack, both for MAS and under other auspices, including tours of his own, notably what he calls is "signature" tour, "The World of the #7 Train" (of which he's announced a 2012 edition, scheduled for April 28; see below).
PARK SLOPE AND DOWNTOWN BROOKLYN

And among my early MAS tours, which became my first with Francis, was the last incarnation of this very tour: of the "gold coast," the northeast, of Brooklyn's Park Slope. Actually, it should have been my second tour with Francis, because I'd signed up for the first tour in the series, which covered the low-rent, still-developing northwest part of Park Slope. But I wound up going out of town and missing that tour.
So I pounced when the Park Slope series was announced to begin again with Part 1, the one I'd missed, in January. By the time Part 2 was slipped into the schedule, on a preregistration basis (for the last several months most of Francis's tours have been scheduled on a walk-up, pay-at-tour basis, and he draws such crowds that I've just been passing on them), I had done so many walking tours in Park Slope and surrounding areas of Brooklyn, many of them with Francis (I've now done so many tours with him, and many of them have remained cherished memories), that I couldn't resist signing up to do Part 2 again, even with the potential scheduling nightmare of the time-sensitive Bronx-to-Brooklyn trek. I certainly wasn't going to miss the Mott Haven walk -- anytime MAS has asked what kinds of tours we might like to see happen, my first answer has always been the Bronx, the borough I know least well.

As it turned out, my legs didn't hold out (I won't bore you with that story) for the whole of the Park Slope Northeast walk, but it jogged a lot of memories and filled in a number of points. One point that Francis made fit in with Jack's point about directionality in Mott Haven: that a number of the neighborhoods in the southern part of the part of Brooklyn that lies west of Prospect Park are still called "South Brooklyn," even though anyone who looks at a map can see that they're fairly far north in the modern-day borough of Brooklyn, as it has existed since shortly before the combined Brooklyn merged with NYC in 1898, they are in the southern part of the original town, then city, of Brooklyn, as established under Dutch and English rule -- consisting basically of that area to the west and a bit to the north of what's now Prospect Park.

I was happy to find my legs back in condition Sunday for another tour with Francis that seemed to have been slipped onto the schedule, again by preregistration, "Downtown Brooklyn Now." It's an area I've wanted to be exposed to for some time now, and I can't imagine it being done better than Francis did it, giving us not only a picture of the area's odd development patterns and the visible changes, but a sense of how it was in older times. I haven't mentioned it yet this time out, but Francis (a bona fide architectural historian), in addition to being vastly knowledgeable over a remarkably wide range of subjects, is very funny, in an ingratiatingly quiet, droll way. In lovely sunny pre-spring weather, it was a grand outing (though I've been on tours with him in ghastly weather, and that worked out just as well). Advice: The next time Francis schedules the Downtown Brooklyn walk, don't miss it.

AS NOTED, JACK HAS SCHEDULED A NEW OUTING
OF HIS DAYLONG "WORLD OF THE #7 TRAIN" TOUR

I wrote a lot about this tour along the Flushing line last year, when I was excited out of my mind for months before it actually happened -- and lived up to all my expectations. It's scheduled for Saturday, April 28, from 10am to 5:30pm, and I'm all but sure I'm going to do it again. Here's Jack's description:

Last year the pace of registration was pretty slow for a long time after Jack announced the date, but as it approached, that pace picked up rapidly, and he wound up having to turn a number of people away.
#
Posted by KenInNY at 10:00 AM