Is Thailand Falling Apart? Is It Safe For Tourists? 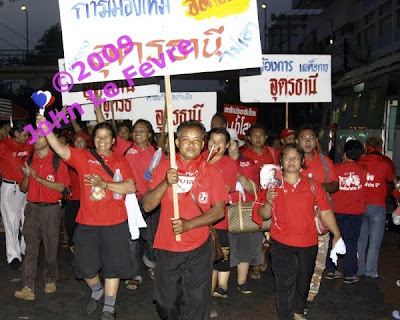 Thai teabaggers demand fascism
Yesterday I picked Roland up at the airport. He had just returned from a couple weeks in Thailand and northeast India. Neither is on the list of the top 10 spring break destinations, which is more about Cancun, Acapulco, South Beach and South Padre Island. Not Roland's cup of tea. No, he wanted to see Benares (Varanasi) and visit a friend living in Bangkok. He got to Bangkok just as the government declared a state of emergency, flew to Calcutta and then took a train, the Vibhuti Express, to Varanasi just as reports came out about 76 Indian soldiers being slain by Maoist rebels. He was more concerned with the filth and sewer-like conditions that he experienced in town. "Why didn't I listen to you?" he asked, rhetorically, when he arrived.

China has already halted tourism to Thailand and the U.S. State Department is warning Americans about travel there. Roland said the atmosphere was "festive" in Bangkok, including among the Red Shirts. 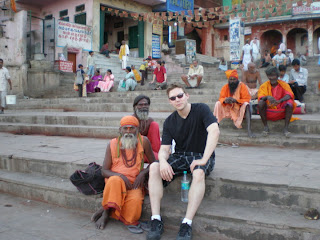 "U.S. citizens are reminded that even demon-strations intended to be peaceful can turn confront-ational and escalate into violence with little or no warning," it said. "U.S. citizens are urged to avoid the areas that may be targeted for demonstrations and to exercise caution in their movements around Bangkok.

Tourism, which accounts for 6 percent of the Thai economy, is suffering after scenes of heavy fighting in Khao San Road.

The State Department said travel to Thailand remains "generally safe" but the possibility of explosive attacks could not be ruled out. "U.S. citizens are reminded to exercise caution and vigilance at all times." it said.

It's likely that the Thai tourist industry will be devastated by the unrest there as thousands of tourists cancel plans. It's probably a great time for intrepid risk-taking travelers to look for bargains. It's certainly safer than Kyrgyzstan.

I love Thailand and I've been there over a dozen times. But I wouldn't think about going there now. The pro-government yellow shirts and the teabagger/pro-fascist red shirts are turning increasingly violent. Suddenly the fireworks are now grenades and there are people dying in the Land of Smiles. Although the burgeoning medical tourism industry (mostly intra-Asian) hasn't been impacted much (at least not yet), the big, mainstream tourism industry is in really bad shape... again. The grenade attack at the Sala Daeng intersection and the adjacent BTS Skytrain station on Silom last night is a place where all tourists in Bangkok visit. The Federation of Thai Tourism Associations (FETTA) says tourists have been canceling their trips.

FETTA earlier estimated that if the political turmoil continues, the number of travelers to Thailand will fall by 2-2.5 million because the tourists have lost confidence in Thailand's safety measures.

Due to the escalating tension, Mr Apichart said, it is hard to see that there will actually be 15 million visitors traveling to Thailand this year as the government previously had projected.

Last year tourism accounted for 6.5% of Thailand's gross domestic product-- the country's single largest foreign-exchange earner. This year hotel occupancy in Bangkok was off by a third even before the grenade attack. And the hotels near the protests, including the big 5-star joints like the Four Seasons and the Grand Hyatt Erawan Hotel are closed as are malls, department stores and restaurants that cater to tourists. The carefully crafted "just like Disneyland" image is going down the drain-- with billions of dollars-- and, at least for a while, Thailand is going to be an adventurer's destination again.

Going to Thailand now would be walking into the middle of a pitched battle. Soldiers have been told to shoot-- to kill. And they have. Thirty have died and hundreds are injured from this weekend's fighting. The government is fighting fascism with... fascism. What a mess! The Australian Embassy closed down and warned its nationals to leave the country at once and the British Foreign Office has told its nationals to avoid Bangkok, even if just for transit purposes. (Israelis, on the other hand, are ignoring the danger despite government warnings.) The Thai stock market is crashing and the bond market is soaring. The baht is a bargain against the dollar (32.41 per dollar). Meanwhile, Malaysia is trying to take advantage of the situation to horn in on Thailand's gigantic tourism industry, currently moribund. Tourists are generally avoiding the trouble spots but the trouble spots aren't always static and tourists are among the injured. In central Bangkok, a small number of hotels have either been caught up in the crossfire or have been used as sniper nests by the army. The tourist authorities are hoping people visit Phuket and Chiang Mai instead of Bangkok.

The 5-star Dusit Thani Hotel has one of my favorite restaurants in Bangkok, the Benjarong, and I always eat at least one meal there on any trip to Thailand. It was hit by a couple of grenades Sunday night.

Executives at the Dusit Thani Bangkok Hotel are in shock after the hotel was targeted in a grenade attack that is believed to be linked to suspicions that Maj Gen Khattiya Sawasdipol, a red-shirt leader, was fatally shot by a sniper who was hiding in the property.

Both the allegations and the attacks have shocked hotel staff and executives.

Grenades fired from an M79 launcher hit the five-star hotel late on Sunday night. The blasts sparked off fires on the 14th and 22nd floors when they exploded... The attack on the Dusit Thani may have been motivated by rumours that it was a sniper positioned in the hotel who shot Maj Gen Khattiya, also known as Seh Daeng, last Thursday night just moments after giving an interview to journalists from the protest camp outside Lumpini Park. Maj Gen Khattiya died from his head wound yesterday.

Revenues are down 13% over last year and the hotel posted a net loss of 107.9 million baht (around $3.3 million).
Posted by DownWithTyranny at 3:36 AM

I don't know if Thailand is safe for tourists, but nowadays, everybody has to be really careful when going to another country.
Luckily, my Buenos Aires apartments were very well located, so the area was safe.

Hostels offer affordable accommodation and are a great place to social network and meet people from all over the world.

Travel in South East Asia has certainly become easier especially in the bigger cities. I have been living in Bangkok for over ten years and the change in the infrastructure even in some of the more rural parts of the country is quite drastic.
One thing that seems to always catch travellers out is when they go on some of the less well organized treks in the North. Some of the routes and terrains can be quite challenging and not many insurance companies will pay out when travellers decide to do these kinds of activities. There is some interesting information about this here at personal injury attorney Thailand it details a lot of the ins and outs of what you can do if you have problems whilst travelling in the country.
Travellers on buses should also be weary of leaving anything valuable in the holds below as gangs still rob these things frequently especially on the longer haul journeys.