Is Albania A Safe Country For Tourists? And What Were The Most Dangerous Countries In 2009? 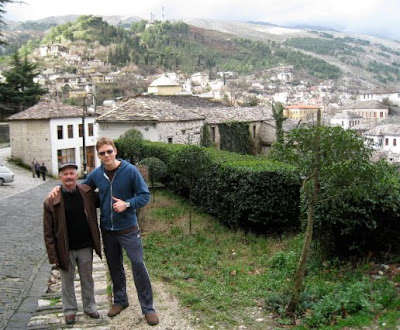 About as dangerous as it gets in Gjirokastër, Albania
Simple answer about Albania: yes, very safe. On the other hand, when George W. Bush visited it, the one country in the world where he is considered a hero-- for encouraging the Albanian Kosovars to declare their independence from Serbia-- his wristwatch was stolen. Petty crime exists everywhere of course and if you're looking for trouble in Albania-- even stickier trouble than pickpockets and cutpurses-- you can probably find it as readily as you would in Paris or New York or Bangkok.

On the other hand, if you're afraid of Muslims, by all means keep out of Pakistan, Yemen and London... but don't worry about Albania. One of the good things the repressive Communist dictatorship accomplished was putting organized religion where it belongs-- in the personal spiritual sphere and far away from the public sector. Formerly a "Muslim country," it is now estimated that only around 10% of the people here take any of the backward, violent, archaic, Abrahamic, Bronze Age religions seriously.

I guess you could count the environmental catastrophe that is Albania "unsafe." And the roads, which are getting better all the time, are still largely something most Americans would think of as unsafe,
especially up in the mountains, which is most of the country. But unless you try interfering with a blood feud-- yes, after being suppressed for decades, the free market has brought them back in full
force-- the likelihood of you getting into any violent confrontations in Albania is remote.

With an unemployment/underemployment rate as high as 80%, it's startling that there isn't more crime. Even the desperate taxi drivers tend to try to rip tourists off less than in most countries! But if you've been looking for dangerous countries to visit-- or to not visit-- Art Matters reported on the Global Peace Index for 2009 by naming the 10 safest and 10 least safe countries. First the good news: New Zealand, Denmark, Norway, Iceland, Austria, Sweden, Japan, Canada, Finland, and Slovenia. Interestingly, Iceland's ranking went from #1 in 2008 to #4, primarily because it's economy collapsed. The ten least safe countries (at least according to a report in Forbes) are

As in 2008, the USA did not rank very well. It ended up as 83rd which is, however, an improvement in comparison with the previous year (going up from 97th position). Among the factors that cause the bad rankings for the USA is for example the ease of access to weapons, foreign wars or the number of imprisoned people.

As for the most dangerous cities to visit, there are different perspectives. In terms of murders per 100,000 inhabitants, the 10 worst are:

A more tourist-oriented perspective comes from RealClearWorld.com where the list is quite different, although
Ciudad Juarez doesn't fare all that well on their list either:

Posted by DownWithTyranny at 11:34 PM

i would like to make a correction, his wristwatch was not stolen. Later that day Bush announced he had given his watch to his watch to one of his bodyguard, which could be seen in the video too. Please edit that part as it's not fair for the Albanian people to be known as thieves.