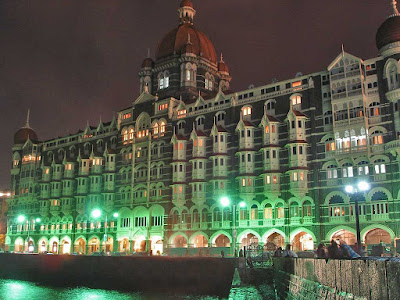 The Taj in Mumbai
Aswan was the end of the line for our 1997 cruise up the Nile. One of Egypt's periodic anti-tourist atrocities, this one across the river from Luxor-- scores of Swiss and Japanese shot and macheted to death amid the well preserved remains of the mortuary temple of Hatshepsut (the female pharaoh), led to an exodus of tourists from Egypt on the day we arrived. We had the country virtually to ourselves (not counting the 65 million or so Egyptians). Or we did until we got in Aswan. It only rains there once a decade but for some reason it was the only place in Egypt filled with tourists while we were there.

There's only one serious luxury hotel in Aswan, the Old Cataract which dates to 1899 and is famous for having hosted Winston Churchill, Agha Khan, King Farouk and is renowned as the place where Agatha Christie wrote Death on the Nile

. After barely seeing another tourist for most of a month, we were told there was no room at the inn. 130 rooms in the middle of nowhere with every tourist in the country having fled Osama bin-Laden's future partner, Ayman Zawahiri and no room for us? Impossible! I wouldn't take no for an answer and we wound up in a windowless storage room that smelled of toxic chemicals. But we did spend a night at the fabulous Old Cataract (which is currently closed for renovations and will open as the Sofitel Legend next year).

Yesterday's Independent featured a travel piece about hotels becoming potent symbols and national institutions, the way the Old Cataract is, although the author doesn't mention it. He concentrates on the Taj Mahal in Mumbai, and three I've never been to, the al-Mansour in Baghdad, the American Colony in East Jerusalem and the Zhiwa Ling in Paro, Bhutan.

Hotels can be more than just places to sleep and eat. The best can be worlds in themselves – indeed for many travellers hotels are their world while lodged in a distant, strange and perhaps dangerous land, and so become of huge importance.

They are at once home and refuge, places of meeting and of escapist fantasy. And if their architecture and ambience is particularly characterful and distinguished, some hotels even take on the role of symbol of the city in which they stand: historic and cultural landmarks that in various and almost mysterious ways represent national aspirations, ambitions or beliefs. These are the most fascinating hotels, always rewarding as objects of study and contemplation.

Odd collection of choices. I would have included the George V and the Plaza Athénée in Paris, the Rambaugh Palace in Jaipur, the Park Hyatt in Tokyo, the Four Seasons in Istanbul, Raffles in Singapore, the Cipriani in Venice, the King David in Jerusalem, the Peninsula in Hong Kong, the Oriental in Bangkok, Le Sirenuse on the Amalfi Coast, both the Four Seasons and the Principe di Savoia in Milan, and the Mamounia in Marrakesh-- although the Esbelli in Ürgüp is more wonderful than any of them. And in the last few years I've learned that renting villas and apartments is much more suitable for me when I travel-- even if they're not as iconic as the Independent's picks.
Posted by DownWithTyranny at 8:31 PM