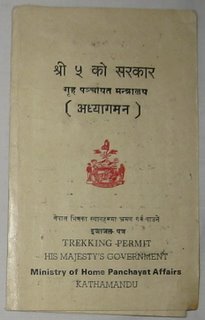 When I left London in my VW van in 1969 my goal was Nepal. The combined allure of the Himalayas, Shangri-la and Buddhism had been knocking around in my drug-addled brain for all my teenage years. Between Nixon in the White House and American troops in Vietnam, I figured mankind had no future and I better get to Nepal now or I'd never see it. 1969 was also the year I started the long, hard process of kicking drug dependence. By the time I got to Nepal in 1971 I had pretty much kicked drugs-- although, for sociological reasons, how could anyone possibly resist sampling the hash parlors along Hippie Street? I didn't. But after that I really did kick drugs.

Anyway, my 2-3 months in Nepal became part of my personal lifestory and the wondrous tales about climbing in the Himalayas and about how primitive and backward and peaceful and enlightened I found Nepal were things I talked about a lot. A few of my more intrepid friends wanted to go. And some did. Many years later, when I was living back in America, Nepal was as much a dream for Roland as it had been for me when I was his age and it didn't take much for him to convince me that we should go visit Kathmandu. Today when I woke up and saw the violence in the streets I felt very sad for this peaceful, enlightened, beautiful little corner of the world.

It's funny, I remember more specifics about my 1971 visit than I do about the more recent trip! Although a trip to a place like Nepal has always got to be exciting, I think I remember 1971 more clearly because I drove, I had no money-- my van literally rolled down the last Himalaya into the Kathmandu Valley and I had not a cent to my name-- and I had no choice but to be close to the ground and open myself up to all sorts of adventures.

I guess the two most memorable specific events I recall-- both vividly-- fall into this category, even more than trekking to the base camp of Mount Everest! One involved happening on a neighborhood "hootenanny." Each square block in Kathmandu surrounded the neighborhood temple and at night the baker and the candlestick maker and everyone else would come out and play transcendental music on the temple portico into the wee hours. Those nights will be with me forever. Unfortunately, so will the other adventure. As I was driving back to India after a few months in Nepal, in preparation for a return to Europe after a couple years driving around Asia, I had to ford a stream. My van-- which was both my home and my transportation-- started floating downstream. Some truck drivers lasso-ed me and pulled the van to safety.

In the 90's when Roland and I went, we flew and we stayed in hotels. A great time for sure. But... well, nothing is ever the same. We flew into Bombay (now Mumbai) in late November on Delta, which was a decent airline back then (now it completely sucks, ripping off and cheating its customers in a desperate and pitiful struggle to stay alive). We stayed at the Taj, the grandest and most venerable hotel in Bombay. It's laden with history and antiques and it's right on the water next to The Gateway. It was the hub of some kind of upper class social life, although I recall rooms being around $200. At one point the electricity went out for a long few hours, a drag because ac is a must and we were on a high floor. But poor Roland was in the shower when the power went out and suddenly raw sewage started coming out of the spigot. And Roland is a very fastidious person. He'll never forget that; I'll stick with the Nepali hootenannies.

I don't want to make this a blog about India so I'll cut to the chase. We flew to New Delhi, hung out for a few days and then took a Royal Nepal Air flight to Kathmandu. It's a short, cheap flight, like about an hour. The hotel, The Yak and Yeti, sent a car for us. It was a souped up Hyundai-- like a low-rider deal-- driven by a couple of kids playing rock music cassettes. It was already night but it felt kind of like going home for me-- and I could feel how excited Roland was as we drove into town. So different from the first time I was there-- right after they had paved a road in honor of the crown prince's marriage-- but there is still something timeless about the Kathmandu Valley that I picked right up on.

I could only dream of places like the Yak and Yeti when I was a poor hippie in a van. It seemed like a paradise inside paradise. But, although a contender for "best hotel" in town, it's kind of a dump. Durbar Marg is a kind of upscale area but it doesn't have a lot of personality. Fortunately it's an easy walk to anyplace you could ever want to go in town. We had booked in advance and negotiated a bit and I think we paid something like $125 for both of us and got an upgraded room. The hotel doesn't have much character, just mostly a faceless grand Asian hotel... but this is Nepal and nothing is too grand (except the temples). Anyway, it was worth the dough and we couldn't wait to hit the streets-- me to recapture my 70's adventure, Roland to experience first hand what he had heard about for years.

Neither of us got what we were looking for, of course. But it was actually pretty awesome. We headed over to the Durbar Square area which is honey-combed with temples. The streets were dark and empty and we both got right into the exoticness of it. The packs of stray dogs wandering around didn't make us feel that great but we definitely knew we were in a foreign place, a very foreign place.

The food in Nepal is ok-- kind of like Indian food but cruder. We never found anything amazing but it was all ok. I had a recollection of having eaten in a fancy, yummy place called Boris' when I was a kid. I think it is now called the Chimney Room of the Yak and Yeti and it was founded and run by a Russian émigré name Boris. It's neither fancy nor yummy, except by Nepali standards. They serve Russian food of course. The best Japanese restaurant in town, Fuji, is also very modest but the food was decent and it was very inexpensive for a version of fine dining. Other than that we stuck to modest Nepali restaurants and to the hippie expat hang-outs in Thamel. It's not a foodie place. 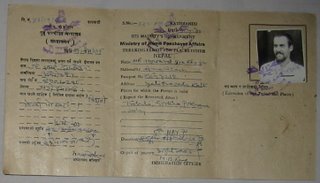 It is a great, amazing, phenomenal walking around place. And that's what we did for 10 days. December in the Himalayas... brrrrr... right? No. It's in the Valley and very temperate-- sort of like California weather almost. We stuck mostly to Kathmandu, Patan (an ancient suburb) and Bhaktapur, also nearby. Each one was more wondrous and fantastic than the next-- just magical. The whole place is a living museum. The past is still living and breathing and coexisting with today and every narrow alley and every square is a unique and exotic world.

Because I had talked about it for so long, Roland insisted that the first thing we do the first morning was to go to the legendary Monkey Temple. Turns out, only I called it the Monkey Temple. It is actually the most venerable temple in Kathmandu and it is known as Swayambunth Stupa. Its a little out of town on top of a forested hill with hundreds of stairs to the top. When I was first there the monkeys were pretty wild and threatening. They're a lot tamer now. But it's still quite the schlep to the top; there's a way to drive to the top around back but that's for pussies. Supposedly it's 2,000 years old. The place is crawling with pilgrims (not tourists) and the top is temple upon temple upon shrine upon shrine. It's was amazing-- and totally worth the exhausting climb. We went to a million temples in Nepal but Swayambunth Stupa was our fave.

A close second was the temple complex on Durbar Square in Patan. We loved Patan; it's even more remote from western civilization that Kathmandu itself. We couldn't get enough of it. We traded our airline toiletries kits for thankas. Durbar Square has a royal palace, the Monkey God temple (Hanuman) and temple after temple, each one fascinating and beautiful. We flipped over the Krishna Mandir but there had to have been a dozen at least and it was completely amazing and engrossing. 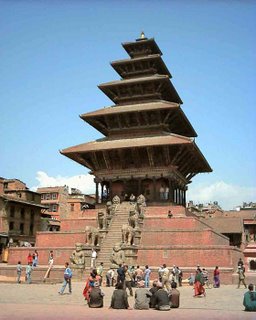 The next day we went to Bhaktapur, a little further away-- not just geographically, but further back in time as well. It was like going into ancient history, even more so than Patan. (By the time Kathmandu was seeing almost cosmopolitan in comparison). It's about an hour from Kathmandu. We took a bus there for less than a buck for both of us and a taxi back for about $5. The Durbar Square there is more open and has less temples but one is amazing-- a 5-tiered pagoda, Nyatapola.

We did some shopping although didn't really buy much. I picked up another Tibetan rug at the refugee center near Patan and we had fun learning about thankas and buying some and trading for some. Mostly we just loved interacting with the people in their environment. One day we took a bus out to Nagarkot for a spectacular view of the Himalayas and some walking and one of the most amazing sunsets I've ever seen. There's a bus from Bhaktapur and it takes a couple hours and costs about a buck. You'll never forget the sights you see from Nagarkot, especially if you hike about a mile out of town to a place where you can see Everest.
Posted by DownWithTyranny at 7:20 PM