Urban Gadabout: On (and alongside) the waterfront 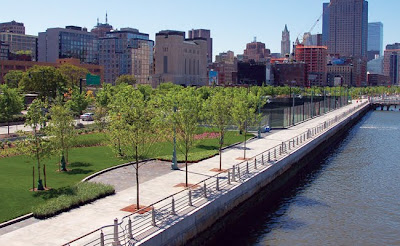 The Tribeca section of Hudson River Park: Hudson River Park -- which I just toured from the river as my City of Water Day trip -- is the subject of multiple walking tours by two of the Municipal Art Society's heavy hitters, Francis Morrone and Matt Postal.

[Last night, writing about my City of Water Day river cruise along New York City's ever-developing Hudson River Park, I promised a rundown of some of the remaining summer tour activities focused on the New York-New Jersey waterfront. Here goes!]

Today I did the first tour in a series of walks the Municipal Art Society's Francis Morrone is devoting to "Walking the New Waterfront": "The New East River Waterfront." I didn't rush to mention it since I knew it was sold out. The MAS summer schedule includes the next two installments in Francis's waterfront series. (Some editorial help would have been in order to clarify that the August 18 walk is Part 2 of his waterfront series and Part 1 of a subseries devoted to Hudson River Park.) Francis mentioned today that there will be more installments in the next MAS schedule announcement, and also announced -- when he was pointing to Governors Island from a stop at the East River's Pier 11 that there will be a Governors Island tour in his waterfront series.

Francis, who has a book in the works on the subject, is fascinated by the revolution in landscape architecture on display in much of this new waterfront development, which he considers at the vanguard of such activity anywhere in the world.

The second in our series on the dramatically changing Manhattan waterfront with architectural historian Francis Morrone takes us to the West Side, where we will begin a series of walks up the Hudson shoreline as far as Riverside Park. The first of these walks begins in the northernmost reach of Battery Park City and moves north through the TriBeCa and Greenwich Village sections of Hudson River Park to at least Pier 45.

Our third walk with architectural historian and author Francis Morrone exploring new waterfronts takes us to Brooklyn, where the ambitious Brooklyn Bridge Park is rapidly taking shape among the disused piers and other spaces between the Manhattan Bridge and Atlantic Avenue. Designed by the renowned firm of Michael Van Valkenburgh & Associates, this is the most talked-about recent urban landscape project in the country, after the High Line.

I should point out that this summer Francis has done the first parts of a pair of three-part series in Brooklyn:

* one devoted to Boerum Hill, which will continue with the bordering neighborhoods with which it's often linked, Cobble Hill and Carroll Gardens

* one devoted to Ditmas Park, one of three neighborhoods in "Victorian" Flatbush which contains a historic district -- still to come are walks in the others, Prospect Park South and Midwood

As I've pointed out a number of times, Francis can be very funny, and he usually doesn't telegraph his jokes. He also noted out that he and Matt did their first MAS tours in the very same week, and are the same age, so I guess it's a sort of MAS Hudson River Park throwdown. Matt has two Hudson River Park walks on the summer schedule:

Down by the River: Greenwich Village and Gansevoort
Saturday, July 21, 11am-1pm

Join Matt Postal, architectural historian and author, to visit the first section of Hudson River Park. Since they first debuted in 1999, the quiet blocks where Greenwich Village meets the Hudson River have attracted increasing attention. This walking tour examines how the decline of waterfront commerce in the 1960s set the stage for recent developments, viewing several early residential projects and conversions, such as the West Village houses and Westbeth, as well as a number of stylish new apartment buildings designed by Asymptote, Julian Schnabel, and FLAnk. We'll conclude in the Gansevoort Market Historic District, where the High Line starts and the future home of the Whitney Museum of American Art by Renzo Piano is now under construction.

Down by the River: West Chelsea and Hudson Yards
Sunday, August 12, 11am-1pm

This tour with Matt Postal, architectural historian and author, focuses on the once-gritty West 20s, where former freight facilities are being converted into luxury housing, public parkland, and commercial space. We'll discuss the present progress of the Hudson Yards Redevelopment Project, the next stage of the High Line, major historic structures in the West Chelsea Historic District, and visit Chelsea Cove, a particularly lovely section of Hudson River Park that includes gardens by Lyden B. Miller and a restored railroad float transfer bridge.

(I don't play favorites here. Yesterday I did Matt's "New to New York: Broadway's Cultural Corridor" tour, and today I did Francis's inaugural waterfront tour on the lower East River, and I'm registered for both of Francis's and both of Matt's upcoming waterfront tours.)

Joe has a long history with Coney Island, and this summer once again is doing a walk there.

Join preservationist and lifelong Brooklyn resident Joe Svehlak for a summer favorite as we explore America's first great seaside resort. We'll look for remnants of Coney Island's "honky-tonk" past, when as many as a million people would visit "Sodom by the Sea" on a hot summer day. Have a Nathan's Famous, view the popular ballpark, the new amusements, the historic rides, and enjoy the boardwalk as we discuss the struggle to designate landmarks and the future of the fabled resort. Wear your bathing suit if you want to go for a swim with Joe after the tour!

Actually the tour of Joe's I'm really looking forward to is the next in his series of neighborhood walks, pushing farther along the Terminal Moraine that separates Brooklyn and Queens from Bushwick (which unfortunately I wasn't able to do; I sure hope he does it again!) to Ridgewood and now to Cypress Hills (see below), and also Sunset Park (where he grew up, and also very much part of the Terminal Moraine story, since it sits atop and along the shoreward side of the all-Brooklyn section of the ridge) and Boerum Hill.

Joe has been doing a bang-up job of showing us -- not just telling but showing -- how each area came to be settled, and by whom, and how those original settlers either stayed on or (so often) moved on, and who replaced them and why, and accordingly how the neighborhoods have evolved.

Join preservationist and lifelong Brooklyn resident, Joe Svehlak, in this area east of Bushwick on the Queens border known as the Eastern District home to some lovely and varied architecture. Fine civic buildings, grand mansions, interesting row houses, and even a church by Richard Upjohn are to be found here. The varied hilly topography due to the terminal moraine from the Ice Age, makes for a fascinating walk up and down the streets. At the beginning of the tour we will make a short visit to the Evergreens Cemetery, one of the city's first garden cemeteries (1849), whose park-like setting is the final resting places of some of Bushwick's finest citizens.

AND DON'T FORGET WORKING HARBOR'S
TOURS, NOW ON LAND AS WELL AS SEA

Of course there are now kajillions of cruises on the harbor these days -- morning cruises, afternoon cruises, evening cruises; dinner cruises, cheese-tasting cruises, hideous-entertainment cruises; etc. etc. etc. But most of them tend to focus on the narrowish band of water that can be comfortably covered in an hour or two from the lower Hudson to the lower East River, naturally including the Statue of Liberty. Now, however, there are all sorts of other harbor tours, and I've just begun to discover them myself.

I should probably have called more attention to this year's schedule of those wonderful "Hidden Harbor" tours the Working Harbor Committee does aboard the yacht Zephyr in conjunction with New York Water Taxi (Circle Line Downtown), and have neglected them only because I did all three last year. However, it's still possible to do all three. They're all two hours, and scheduled for Tuesday evenings, departing from Pier 16 at South Street Seaport, with sailings scheduled for 6:15pm in July and August, 5:30pm in September. Each tour normally features a harbor veteran as running commentator plus a guest speaker with a particular interest in the particular subject.

* Newark Bay, the one I really got worked up over last year ("Newark Bay or bust! (Is there anyone else whose pulse is sent racing by the prospect?)"), which has three more outings -- on July 24, Tuesday, August 21, and September 18

* North River (i.e., the Hudson River, the river that came from the north), on August 7

* Brooklyn (a view from the river of Brooklyn's western shore from the Queens border at Newtown Creek on the north all the way down to the Sunset Park waterfront), on September 4

Working Harbor also schedules all manner of other special waterfront events -- for example, a three-hour "intensive" tour of Newtown Creek with Newtown Creek Association historian Mitch Waxman ("Walking Dutch Kills with Mitch Waxman, 'Your Guide to a Tour of Decay'") on Sunday, July 22, 11am-2pm (which I can't do, because that's the day I'll be heading to the Thomas Edison National Historical Park on a New York Transit Museum tour). Definitely keep an eye on the WHC website and blog, and get yourself on their e-mail list.

I did, however, tell you about Working Harbor's new-this-year walking tours, both of which still have upcoming dates:

* Staten Island (from the St. George Ferry Terminal to Sailors' Snug Harbor, spotlighting the Kill van Kull separating Staten Island from Bayonne, New Jersey), led by none other than Mitch Waxman, on Saturdays, July 28 and October 13, 11am-1pm, ending up at one of my favorite places, the Noble Maritime Collection in Snug Harbor