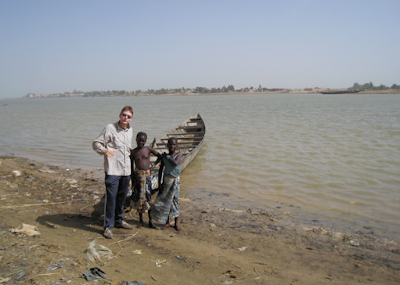 Roland finally found a couple of Bozo ladies to pose for a photo
The thing I liked most about visiting Mopti, Mali's second largest city, wasn't actually in Mopti but nearby. Mopti is a stereotypical seedy African river port. Just outside of it-- as though in another world entirely-- are Bozo fishing encampments which couldn't have possibly been any more primitive a thousand years ago. We rented a boat and went up river 'til we came to an island with some thatch-roofed huts, a Bozo village. Roland and I walked around for an hour, taking photos, poking around. No one paid us any attention whatsoever. Nothing-- neither positive nor negative... nothing.

In town we stayed at the most beautiful hotel in Mali, French architect Amédé Mulin's boutique establishment La Maison Rouge. I've been wondering how the small hotels have been faring now that the country is engulfed in civil war. I know they're all shut down and destroyed in Timbuktu, who has been taken over by slavers and religious fanatics but things in Mopti are just bad, instead of horrendous. The hotel is closed but the most recent letter I got from Amédé is mildly optimistic. He's been in France but he was just back to Mopti for a visit. I'll share a few paragraphs:

I have found that the hotel was generally OK, though degraded by lack of maintenance of the building and the first rains. 6 employees were still in office. The cook resigned during my absence, the mason and his maneuver worked in general maintenance during the month of April and ceased operation in May and June Power cuts, although nearly constant, have not damaged the stock of freezers. The plant has recently commissioned two new groups, the power cuts have almost ceased. Banks are always closed and government in part.

The team is demoralized by the closure of the hotel, the gloom in the city, lack of opportunities and stagnation of the political and security situation in Mali, a certain feeling of abandonment. Some began to develop other activities, such as the cook who has returned from Burkina Faso, or the wizard ruler who would also resign.

We met a few days ago to review the call for support. Staff hoped to reopen the hotel, after listing the charges of the hotel operation estimated at over € 1,500, given the lack of cash and revenue prospects, given the attendance of other catastrophic hotels remained open to Mopti and Sévaré, we agreed that it was reasonable to remain temporarily closed.

The staff, however, has pledged to work towards a quick reopening if special request rental, important booking or processing in offices or rented house in a project... [I]t is unlikely that we have reservation requests. The hotel will remain closed unless major reservations. We hope the situation will evolve positively, particularly in terms of security, so that projects and humanitarian actors can work in good conditions and create economic activity.

It is always possible that the board of the UN Security eventually bow to the many requests for a military intervention that would transform de facto humanitarian hub in Mopti, recreating a certain dynamism to the hotel sector, waiting for the Mali again become a tourist destination.

I don't imagine tourists-- at least not American ones-- will be returning to Mopti (or anywhere in Mali) any time soon. There were very few Americans when Roland and I were there a couple years ago but between the kidnappings and violence and the destruction of everything of historical value (other than in Dogan country down south), the country is being completely avoided by international tourists. There was a decent analysis of the situation at AllAfrica.com this week. It looks like the split between the Tuaregs and the al Qaeda faction has widened... into chasm. I always find it bizarre that no one ever brings up that the Tuaregs capture people and enslave them. I guess that's considered to barbaric to even mention.

'Islamist rebels' have been blamed for a campaign of plunder in Timbuktu this week, but who exactly are they and what do they want?

As momentum builds outside Mali to launch some kind of military intervention into rebel-held territory, the conflict in northern Mali has grown increasingly complex in recent weeks. Even as reports of rampaging Islamists in Timbuktu proliferate our news bulletins, however, the complexity of the conflict has been steadily ignored.

It has been several months since rebel groups wrested control of Northern Mali from government forces. One group, a Tuareg tribal militia known as MLNA, was armed by former Libyan leader Muammar Gaddafi and fought for him during in the Libyan war last year. When Gaddafi fell, the MLNA raised guns for their old cause-- a state of their own. They are ethnic nationalists, embittered against colonialism. And as the MNLA gathered their forces, they formed an alliance with other militias in Northern Mali, all of them rebels with separate causes-- but, crucially, a common enemy.

One of these groups, Ansar Eddine (Arabic for helpers of the faith), has been described by commentators as the Taliban of the Sahel. This is the group currently in control of the town of Timbuktu, a city that once was the hub of cultural and intellectual pursuits in Africa.

The MNLA captured Timbuktu without a fight after the Malian army abandoned the city. A day later, however, Ansar Eddine drove out the MNLA, and has held the city ever since. Andrew Lebovich, a Washington DC-based researcher on the Sahel, says that although Ansar Eddine was formed late last year, its leader, Iyad Ag Ghali, has long been a power broker in northern Mali. Analysts say Ag Ghali's importance as a leader lies more in his kinship and tribal roles in northern Mali than in his new-found role as the leader of a so-called Islamist faction. Ag Gali has repeatedly fallen out with the MNLA, who accuse him of humiliating them.

The MNLA, then, was drawn into conflict with Ag Ghali. Crucially, though - and unlike the MNLA - Ansar Eddine's Islamist credentials have increasingly been linked to the Al-Qaeda branch in west Africa (AQIM)."Reports indicate that Ag Ghali has grown more religious in recent years, but initially Ansar Eddine appeared no different to the MNLA," Lebovich tells Daily Maverick.

Other analysts say Ag Ghali has emerged as a committed Salafist in recent years, and declared his intention to put all Mali under Sharia law-- angering the MNLA, who disagree with his interpretation of what the identity of the new Malian state should be. Negotiations between the two factions have been futile. What is becoming clear is that Ansar Eddine does have stronger links with Al-Qaeda in the Islamic Maghreb than previously suspected. "There is a general belief that much of the support lent to Ansar Eddine came from AQIM," Lebovich says, noting that this includes weapons, money and ideological support. There is, however, very little credible information on the exact nature of the influence of AQIM on Ansar Eddine.

Ag Ghali's embrace of the Salafi brand of Islam is significant to understanding Ansar Eddine's rampage on the heritage of Timbuktu in the last week. Salafists believe that any innovation from the original version of Islam, as practised in the Arabian Peninsula in the time of Mohammad, is akin to polytheism-- blasphemy. Now that Ansar Eddine has firm control over Timbuktu, they've started to purge the city of its religious relics and destroy historic cultural sites deemed blasphemous.

Great mosques and mausoleums to local saints-- of unique architectural design-- were erected in the 15th and 16th century, and the city is home to a long tradition of a local Sufism, which is an Islamic mystic tradition.

It's little wonder, then, that this campaign has been compared to the Taliban's 2001 destruction of the Buddhas of Bamiyan.

Attempts by regional body ECOWAS to negotiate with rebels in northern Mali have yielded nothing so far. As one negotiator put it, "We're in talks at the moment, but obviously they're not going well because we want different things." Rebels with separate causes defeated a common enemy, but now it remains to be seen which cause will trump the other.

The rebel insurgency in northern Mali began as yet another expedition in the life and times of the Tuareg people to win sympathy from the world.

But while the MNLA will win some sympathy for being victims of Ansar Eddine, in the end, the prospect of broad international support for a Tuareg state is now in tatters, much like Timbuktu.

The two factions are now fighting for real and the al Qaeda Islamists have driven the Tuaregs out of Gao, the other big prize after Timbuktu. The third "city," Kidal, is also under their sway. The Tuaregs are out in the cold.
Posted by DownWithTyranny at 4:00 PM