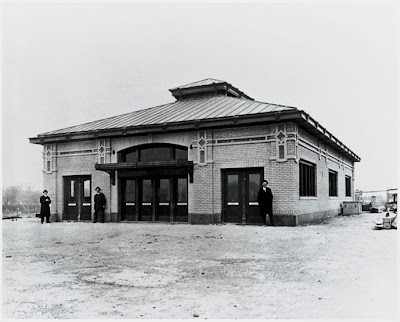 In case anyone was wondering, I've had an incredibly busy and rewarding summer gadding season, which for assorted reasons I haven't been moved to write about. Then, with fall schedules piling up, I had the clever idea of combining some highlights of the season with some look-ahead info. Only I'm still disinclined to write about it, and meanwhile the clock is ticking on more and more of the info, so I think we'd better just get on with it, starting with the New York Transit Museum, since the start of general registration is . . . yikes, tomorrow!

Already many of the most sought-after tours will be booked up from the members-only early-registration period, not to mention the tours (of the old City Hall subway station and the ghost site of the old underground trolley terminal at the Manhattan end of the Williamsburg Bridge) that are members-only -- by themselves excellent reasons to become a member, as I keep pointing out, though there are others, like free admission to the museum and major discounts on all the tours and at the museum shop.

I thought I would do some highlighting of the highlight-filled fall season, but there are so many highlights (I personally have registered for so many tours that I'd be embarrassed to tell you how many) that I would just encourage you to check out the listings for yourself (click on "Tours"). Remember that advance registration is now required for all tours; I think the online registration system is working out pretty well. Considering the quality of the tours, the asking price of $15 for members, $20 for nonmembers, is a pittance.

All tours are Sunday at 12 noon; $15 for adults, $10 for seniors and students; no reservations necessary. Since Jim's schedule isn't available online otherwise, I've posted the whole thing with his full descriptions here. In brief:

MARBLE HILL (the part of Manhattan that was joined to the Bronx when the Harlem River was rerouted)
DATE: September 2, 2012
MEET: 225th Street and Broadway in front of Chase Bank

WHAT'S OUT THERE WEEKEND NYC (WOTW, from The Cultural Landscape Foundation)
vs. OPEN HOUSE NEW YORK (OHNY)
Weekend of October 6-7
Registration for WOTW in progress, information for OHNY still to be published in the Sept. 26 issue of Time Out New York

WOTW has an absolutely sensational list of tours for this NYC version of its What's Out There Weekend, which I should have told you about sooner, because I'm told registration has been exceedingly brisk -- hardly surprising considering the range and degree of interest of the offerings, even apart from the price, which is $00. (Yes, that's zero.)

TCLF invites you to explore and discover the Big Apple during What’s Out There Weekend NYC, featuring a series of FREE expert guided tours highlighting the city’s remarkable landscape legacy. During the weekend, members of the public can visit more than two-dozen different sites around the city.

Check out the listings here, or just register here.

But wouldn't you know that WOTW NYC falls in the exact same weekend as one of the city's most cherished gadding institutions, the also-free Open House New York? OHNY will feature a much larger and even more diverse roster of events -- as soon as the listings become available. And you can be sure that as soon as they do, within seconds the dozen or two events that everyone wants to do will be booked up. Fortunately, the listings are likely to feature an assortment of events at least as interesting, or actually more interesting, that will appeal to gadders of quirkier tastes.

It's important, then, that as soon as you see an OHNY event listing that appeals to you, you pounce on it. Myself, I'm out of the running for 2012, having filled up my gadding card for that weekend with WOTW NYC events I couldn't resist (in all four outer boroughs, though not technically, since my Staten Island walk, around St. George, although originally announced as a WOTW event in conjunction with MAS, became a strictly MAS tour, whereupon I happily plunked down my $15).

JACK EICHENBAUM'S GEOGRAPHY OF NEW YORK CITY
For public tour info, or to sign up for Jack's e-mail list for announcements of scheduled events, go here

By now I've written so often about Jack that you can probably recite the litany on your own. As an "urban geographer," Jack is fascinated by how geographic factors (including topography, water and land access, transportation, and demography) shape the way cities -- or anyplace else -- develop, all illustrated before your very eyes. Nobody has done more to enable me to see neighborhoods and regions as living entities that develop for specific reasons, and I've hardly ever come away from a tour with Jack without some fundamental new understanding of the city -- not to mention all sorts of fascinating information about the area covered, including restaurant tips. It's a good bet that on any tour with Jack you're going to see places and things you won't see on any other tour.

Jack has four tours in the MAS fall season:

Undoubtedly he'll be scheduling other tours and perhaps other events, which is why it's so important to sign up for his mailing list, which anyone else would call a newsletter, except that Jack's contains real news. It is, for example, how I found out about the blockbuster of NYC's fall gadding season, a counterpart to his not-to-miss World of the #7 Train:

This series of six walks and connecting rides is astride the colonial route between Brooklyn and Queens. We focus on what the J train has done to and for surrounding neighborhoods since it began service (in part) in1888. Walks take place in Highland Park, Richmond Hill, downtown Jamaica, Bushwick, South Williamsburg and the Lower East Side. Tour fee is $39 and you need to preregister by check to Jack Eichenbaum, 36-20 Bowne St. #6C, Flushing, NY 11354 (include name, phone and email address). The full day’s program, registration coupon and other info is available by email jaconet@aol.com The tour is limited to 25 people. Don’t get left out! Registration is proceeding briskly.

Jack hasn't done this tour in eight years, and it's going to sell out. The only question is when, and why anyone would take a chance of being shut out is beyond me. (I handed my registration to Jack personally at the first tour I did with him after the official announcement of the J train extravaganza.)
You can also find the public tour schedule by going to the home page of Jack's website, The Geography of New York City with Jack Eichenbaum.
#
Posted by KenInNY at 6:00 PM