Timbuktu Falls To The Tuaregs... Burkina Faso Swamped With Refugees 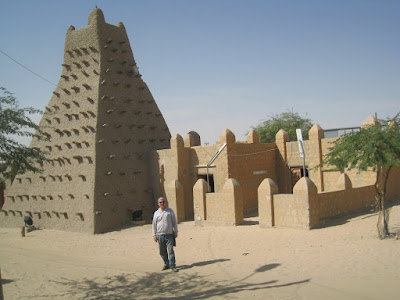 Here I am in downtown Timbuktu, 4 years ago

These days I just want to go to Tuscany or Paris or maybe Bali. And Roland is always coming up with Mongolia or Mozambique or Burkina Faso. The whole time we were in Mali he was grumpy we weren't going to Burkina Faso. I don't know if he has a check list or just wants to add a notch to his belt or what. I know for sure none of his friends have ever heard of Burkina Faso. None of them had ever heard of Mali. And now that hundreds of thousands of displaced Malians-- eager not to fall into the slavery that the Tuaregs practice-- are fleeing in every direction, at least 20,000 of them have arrived in Burkina Faso, which was already having a major problem feeding it's own population and keeping the lid on things. Like Mali's, Burkina Faso's "democracy" is what the aftermath of a far off military coup is called as long as the putschists adhere to corporate-friendly policies.

When I would tell people I was going to Mali or I had gone to Mali they would look at me incomprehensibly. Maui? Bali? I almost never met an American who knew where Mali was. But when I would mention Timbuktu there was at least some comprehension that I wasn't taking about Hawaii. Four years ago, a topper of a month Roland and I spent in Mali, we finally made it to fabled Timbuktu. I had imagined it as the city in Paul Bowles' The Sheltering Sky, which it isn't, but we discovered a unique and fascinating, hospitable if remote town on the edge of the Sahara Desert.

This week Timbuktu fell to Tuareg rebels, savage desert nomads who fervently believe in slavery. Hundreds of thousands of Malians have fled south, as the Tuaregs captured Gao, Kidal and now Timbuktu, the entire northern two-thirds of the country.

Mali's army is reported to have deserted the military base of Timbuktu, the last town in the north under government control, as Tuareg separatists pounded it with heavy weapons. Coup leaders have reinstated the constitution after pressure from neighbouring countries.

Shells could be heard exploding at the base even though it was deserted, local residents told news agencies by phone Sunday.

The soldiers had fled, some shedding their uniforms, leaving Arab militias from the Bérabish community to defend the town, they said.

Al Jazeera television reported that the town, whose population is mainly ethnic Arab, had fallen to the rebel National Movement for the Liberation of Azawad (MNLA), which wants a Tuareg homeland in the north of the country.

On Saturday the army quit the largest town in the north, Gao, leaving it to the MNLA which has already captured Kidal.

The Tuareg rebels have been strengthened by the arrival of well armed fighters previously employed by deposed and murdered Libyan leader Moamer Kadhafi.

The military claims that they have links to armed groups connected to Al-Qaeda in the Islamic Maghreb, which operate in the Sahara.

Timbuktu, a historic city that is on the Unesco World Heritage list, is 800 km north of Bamako and 300 km west of Gao.

Now I'm reading about looting in the captured cities and that Muslim fanatics are imposing their primitive and unevolved version of the Koran on the conquered people. And the rest of the world just sits around bitching that the military coup that overthrew the last military coup has got to turn over power to the former coup leader or no on will help out. The Tuaregs are among the worst lot I ever came across anywhere in the world. My heart goes out for the people who fall into their clutches. Anyway, best tourism advice for anyone thinking of going there-- see a psychiatrist.

While the rest of the world forced Malian coup leaders, ostensibly reformers, to turn power back to the old regime (former coup leaders), the Tuaregs have captured over half the country and just declared their independence. The Tuaregs are brutal and primitive slavers who live for war.

Tuareg rebels who captured the three main towns in northern Mali this week unilaterally declared independence for their state of Azawad on Friday, adding to turmoil in the west African country.

...Tuareg nomads have rebelled three times since Mali’s independence in 1960, protesting at their marginalisation and demanding more autonomy.

But leaders of the National Movement for the Liberation of the Azawad (MNLA) were more ambitious when they started a fourth rebellion in January, seeking to carve out a new homeland in the Sahara.

...Jean Ping, chairperson of the African Union commission, rejected the independence declaration, and called on “the international community as a whole to fully support this principled position of Africa."

France, the former colonial power, said other west African countries needed to see if it was possible to negotiate with the MNLA. Autonomy would be a more acceptable solution to the regional and international community.

France’s defence minister, Gerard Longuet, said: “A unilateral declaration of independence which is not recognised by African states would not have any meaning for us.”

The claim by the MNLA is not supported by all Tuaregs in Mali, let alone by other ethnic groups living in the north. It is further complicated by the fact that the secular rebels received help from another dissident Ismalist group, Ansar Dine, in capturing the three towns of Gao, Kidal and Timbuktu.

Ansar Dine seeks to impose sharia law in the north. Though it has fewer fighters than the MNLA, which has up to 3,000 men, Ansar Dine rebels were reported to have taken control of much of the ancient town of Timbuktu.

Posted by DownWithTyranny at 5:15 PM