Urban Gadabout: You may still be able to find an Obscura Day event near you

I sure hope you're not depending for information on the now-certified Last Person to Know, but I swear I never heard of Obscura Day, which happens this Saturday the 28th, until I opened my new issue of Time Out New York last night. There's a full page in the magazine, but only this for online coverage. Of course, as I write, in mid-afternoon, the only one of the five events highlighted in the print edition seems to be an added time, 3-6pm, for "The Forgotten Beaches of the Forgotten Borough," meaning Staten Island, which starts at the border of the borough's Cedar Grove and New Dorp Beaches.

Even at this late date it's worth letting the Obscura Day website direct you to offerings in your area. You just might get lucky. There's always next year. This is the third incarnation. The organizer, Atlas Obscura ("A Compendium of the World's Wonders, Curiosities and Esoterica"), explains:

On Obscura Day thousands of people, all over the world, go out and explore interesting and unusual places. Sometimes we organize the event, sometimes folks organize it themselves! Over the past two years nearly 10,000 people have attend over 200 different events on Obscura Day.

Well, even if you can't find an available event for this Saturday, there's always next spring.
My chance of finding an event worth signing on to if I'd heard about Obscura Day even a couple of days earlier, when I created a schedule conflict I might not have if I'd known. have a schedule conflict Saturday which I didn't have a couple of days agoIn general, by the time I joined the world of the sentient most of the jazzy-looking offerings were sold out (prices seem pretty modest), but it's worth going to the Obscura Day website, which will direct you to offerings in your area. but even so there are some in the NYC area -- bear in mind that it's a worldwide event -- I might have been able to do if I didn't have a schedule conflict that I might not have if I'd found out about Obscura Day just a couple of days earlier. (I'll explain in a moment.)

FROM THE NEW YORK TRANSIT MUSEUM,
A BOUNTIFUL SUMMER COMING UP

Whew, it was a busy day for me: the first day of the members-only early-registration period (which runs through May 2) for the New York Transit Museum's summer tours. I managed to confine myself to five: 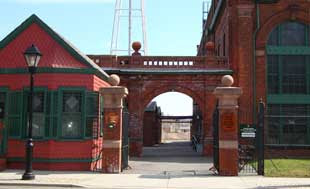 * An outing by bus to the Thomas Edison National Historical Park in West Orange, New Jersey (offered on May 19 and July 22, $50 for Transit Museum members, $65 for nonmembers).
* "Look at a Landmark: The Historic Station House at Avenue H," a converted turn-of-the-century real-estate office on Brooklyn's Brighton line, landmarked in 2004, with promised visits to "other local stations of the same era" (June 3 and July 29, $30/$45)
* One of this year's three Summer Nostalgia Rides, where frolickers young and old get to ride on various old-style subway cars -- and even, in one case, an assortment of vintage buses. Last year I did all three Nostalgia Rides, but having already done "Coney Island Bound!" (this year July 29) and "To the Rockaways, by Rail and Bus!" (August 12), this year I'm just going to do "Cultural Treasures of Brooklyn" (July 1):

Brooklyn's in bloom! Ride in style to the cultural treasures of Brooklyn on board the Museum's classic Lo-V vintage trains. Emerge from underground at Eastern Parkway where you can explore the Brooklyn Botanic Garden's summer blossoms and “Urban Garden” exhibit or pay homage to the iconic art of Keith Haring –- whose work was inspired by the subway system -– at the Brooklyn Museum. Spend the day enjoying these and other local attractions, or stay on the train for a ride underground. It's your day, your Brooklyn.

All three Nostalgia Tours are $50/$65 (children $20/$25). The hard part is deciding between partaking of events at the destination and staying on board the train for those extra rides.

* An eating tour with Saveur magazine's gastronomically omnivorous executive food editor, Todd Coleman, "Bridging the Gastronomic Gap," homing in on the "international noshing extravaganzas" at either end of the Manhattan Bridge to Brooklyn (August 1 and August 8, $45/$65 including the food).

* And one of the summer's two members-only tours "Trolley Ghosts: The Terminal Under Delancey" (June 7 and July 12, $55), a rare opportunity to see the underground site of the onetime streetcar terminal at the Manhattan end of the Williamsburg Bridge to Brooklyn. The other members-only offering is also subterranean: the always-popular "Jewel in the Crown", an otherwise-impossible visit to the long-disused station, designed to be the showplace of the then-new subway system (twice each on May 12 and June 17, $40).

This doesn't by any means exhaust the summer tour offerings. Photography buffs in particular are directed to "Bridge Photography: A Tour and Workshop", inspired by the upcoming Transit Museum exhibition of water colors by Antonio Mosi, who has made a specialty of painting all nine of the city's great bridges (July 14 and August 19, $35/$50). And if you've never seen a subway-system power substation, the tour of Lower Manhattan's Cliff Steet Station (July 7 and August 5, $30/$45), including a walk through the South Street area where Edison built his 1882 powerhouse, is a no-brainer.

I haven't even mentioned the wide range of "public programs" offered by the Transit Museum's Education Department -- the best thing I can do is to refer you to the Calendar of Events. I signed up for a whole bunch -- and am waiting to see the Municipal Art Society May schedule to help choose a date for yet another. The programs are free, or free with museum admission, which itself is free for members. Considering what a genuinely cool place the Transit Museum is for anyone with even a passing interest in urban public transit, membership is obviously a great deal. Do it now and you can still take advantage of the members-only early-registration period.

One innovation, by the way, is that all registrations are now being done online, as is the case with the Municipal Art Society (see below). I love it, and I suspect I'm talking now to people who are similarly cyber-schooled. I do wonder, though, how welcoming it is to people not used to arrange their lives online.

In just the time since I began writing this post, MAS has finally gotten the May walking-tour schedule up -- the long wait presumably accounted for by the introduction (at last!) of the long-promised new system of online electronic ticketing for all MAS tours. All the information about the new system is here, ; the May tour schedule is here.

I've only begun to digest it all, and at first glance the May listings don't look as interesting as, say, April's, but that's all subjective -- and the fact is that this month I've actually done more MAS tours than I have in a long while, and I'm happy about that.

In fact, the reason I can't even try to squeeze in any of the remaining Obscura Day offerings is that I belatedly added a Saturday MAS tour, "Lower East Side -- Art and Culture," to my schedule. And the reason I was free to that brings us to one last story.


FOR JACK EICHENBAUM'S #7 TRAIN TOUR IT'S
"WAIT TILL NEXT TIME." IS THE J TRAIN NEXT?

As I've mentioned a number of time, this Saturday -- yes, Obscura Day (though who knew?) -- is the current version of what my favorite urban geographer Jack Eichenbaum's "signature" tour, "The World of the #7 Train" to Flushing. I did it last year, and was seriously thinking of doing it again, but put off thinking about it until finally I checked with Jack and learned that the tour has been booked up for two weeks! I was delighted to hear it (don't say I didn't warn you!), and decided what the heck, why not do the Lower East Side tour?

Oh yes, I forgot the best part. Jack mentioned that he "may" do "A Day on the J" in the fall. To which I replied that I would have my check in the mail as soon as he announces it.

Meanwhile, keep an eye on Jack's websitebe sure to sign yourself up for Jack's website, "The Georgraphy of New York City with Jack Eichenbaum" (geognyc.com), and e-mail him at jaconet@aol.com and ask to be put on his e-mail list for schedule updates. He's got a couple of MAS tours coming up in May focused on area of his native Queens of special interest to him, Long Island City, which has been undergoing astoundingly rapid changes since the city's adoption of major zoning changes there:. First there's "Daylight Loft Buildings in Long Island City" (May 12), then "What's New in Long Island City?" (May 20).

It's often possible to get advance notice of Jack's MAS tours, but more important there's news of his own tours and all sorts of other lectures and such he's giving around town. Great stuff. Oh, and you might mention in your e-mail that you've heard about that "D on the J" tour and would love to do it. I know I would.
#
Posted by KenInNY at 6:00 PM