Is It Immoral For Tourists To Visit Tibet? 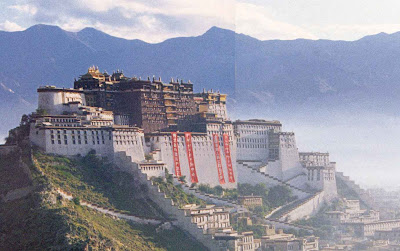 The closest we could get to visiting Tibet in 1970 was to hike up to the border with Nepal and gaze across. Now there are regular flights from Kathmandu to Lhasa on China Air ($500 roundtrip). I always wanted to go and now I'm going to. Whenever I post something about it, I get barraged with sincere pleas not to go to Chinese-occupied Tibet because it will add to the plight on the Tibetan people, who would still like to maintain their national identity and even regain their national autonomy. Journalists aren't even allowed into the country at all.

We're staying at Yabshi Phunkang, a recently renovated residence of the 11th Dalai Lama that was built in 1838 in the heart of old Lhasa. Yabshi is title given to the parents of the Dalai Lama and Phunkhang is a short form of Phuntsok Khangsar (11th Dalai Lama’s family house). Presumably this notice, which is posted in every hotel in the country, will greet us when we arrive:

Ladies and Gentleman Welcome to Lhasa. So that you may have a safe and enjoyable travels, we would like you to be aware of the following government regulations:

1) Foreigners travelling in China must abide by Chinese law and must not endanger the national security of China, harm its Public interests, disturb the Public order, or engage in any other activities incompatible with tourists status.

2) If Chinese citizens are holding a rally or demonstration, it is strictly forbidden for foreigners to participation, follow along with, take pictures or video film any of these affairs. Foreigners are not allowed to interfere in Chinese internal affairs.

3) Foreigners are forbidden to distribute any propaganda material and join in any religious activity.

4) In accordance with regulations, foreigner tourists must go through all registration formalities and stay only at a designated hotel. Without prior permission it is forbidden to travel in unopened areas, to use undesignated transportation, to operate individual business or privately take up an occupation.

5) It's forbidden to visit and photograph the sky burial site according to the local government's regulations for the minority nationality's habits and customs. The tourist who breaks the regulation will be punished strictly.

6) For safety reasons, it is strictly forbidden for foreign tourists to travel by tractor or other privately operated means of transport. If by any hance a traffic accident happens, under these circumstances you will be responsible for your own actions and the results.

7) Valuables should deposit in checkroom, otherwise, the hotel won't be responsible for the loss.

As "political" as I am on my blog, I'm not travelling around the world looking to interfere in other countries' affairs. In Tibet just speaking with a foreign about politics could land a Tibetan in jail for 20 years. We're going there to see place and get a feel for it. I have enough to worry about with my own country's political dysfunction. On the other hand, I'm not unaware that China would like to turn Lhasa into a kind of Disneyland destination for insensitive tourists. And the beef with travellers going to Tibet is that by going there you implicitly condone the status quo and you enrich the oppressors in Beijing. Yeah, tell it to someone who shops in WalMart... or who owns an Apple computer. Here's a perspective that tries seeing it from all angles:

The first point is something which you must decide for yourself, but I feel that this worry is outweighed by the personal insight one can gain into the current political situation. It must also be borne in mind that over 98 percent of Tibetans live (willingly or otherwise) under the jurisdiction of the Peoples Republic of China and one cannot ignore them; they are trying just as hard to free their country as those in exile. Some live within the system, trying to get the best for themselves and their culture, whereas others attempt to live inspite of it, ignoring the rules.

It is true that Tourism in Tibet is used as a propaganda weapon by Beijing to purvey the message that all is calm in Tibet. If this irks you (as it does me) then make sure you tell people how it really was when you get back home.

The second point is something in my view is far more serious:

Many shops and restaurants are not owned by Tibetans, but by migrants. These migrants are encouraged by tax breaks and other government measures. The government would appear to be following a policy of cultural harmonisation by marginalising Tibetans and Tibeatan culture through a dilution of the Tibetan population. This is being done in the hope that future Tibetans will not be able to differentiate themselves from people in other parts of China. This policy would appear to have had some success in Chinese Inner Mongolia where Mongolians are outnumbered 20:1.

As tourism is an important part of the local economy, the growth of tourism will allow more migrants to earn a living in Tibet. There are two ways to combat this: don't go to Tibet, or if you do choose to visit, then you should stay in Tibetan owned hotels, shop in Tibetan stores and eat in Tibetan restaurants. Anyway, who wants to go all the way to Tibet just to eat cuisine from China? The Chinese and Hui food is far better in Chengdu and Linxia.

The Free Tibet website lists the pros and cons for travelling to Tibet.

Arguments for travelling to Tibet:

• The Dalai Lama  encourages foreigners to witness the oppression in Tibet and to inform others of their experiences on their return.

• Tourism provides a window to the outside world for Tibetans.

• Tibetans find the presence of tourists in Tibet encouraging.

• Consider going to Tibetan populated areas outside the TAR in Sichuan, Gansu and Qinghai provinces, where you can travel without a special permit and the need to hire an official guide.

Arguments against travelling to Tibet:

• Most of the money you spend will go into the pockets of Chinese enterprises. The tourist infrastructure in Tibet is largely controlled by Chinese businesses with headquarters outside Tibet.

• It is hard to travel in Tibet without tacitly complying with the Chinese regime.

And if you feel it's wrong to go to Tibet, where do you draw the line? Russia? Israel? Morocco? Myanmar? Arizona?
Posted by DownWithTyranny at 5:10 PM

Hi Howie, Glad to see you are still traveling around the world and offering a unique perspective. Enjoy your writing very much. Ming

Tibet is by far the most beautiful and wonderful people in the world. I am of course defining a people that make a place good or bad. The Chinese a wonderful fighting force feel a need to have a pitiful godly people such as the Tibetans. But since "straight is the way" and "do not be overly righteous nor overly wicked" as Christian scripture (or if you prefer "the middle way" as a Buddhist) this could never be correct (or as so often I must deal with "Christian" law which only serves as our knowledge of sin and the need for Jesus). We should recognize the slavery and mercilessness on little Tibet (tidbit) but how could we even understand living in the vast riches of America who never came to their aid til it had gotten far out of control? On second thought (instead of sending our best and brightest to die in a foreign land for trying to follow orders and protect their friends) let's stop fighting and B-less! Stop trying to deal with your neighbor but recognize you too are black and black is beautiful. Blessed are the poor in spirit for theirs is the kingdom today like it was and will be.
EASTER (west of America whom the profile of our warrior presidents Washington and Lincoln looked to for help as seen on the penny and quarter) E=5th letter and likewise respectfully A1 S19 = 25 (Y) or if you prefer Easter = Whiter! Likwise by this value system black AND white are finally found to be EQUAL! (2) And we should all not mind being a little tan the so called white skinned are tanned by the son. White may represent pride in old eastern wisdom but this is certainly not represented in the terrorist groups white supremists, kkk, or nazi's. Let's not try to make others darker so we feel white. This only makes us all darker and is perpetually self destructive. God blesses Tibet! Don't help but support!