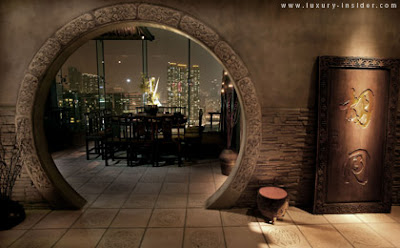 Although Hutong has the best views in town, it's even better known for it's incredible kitchen
A political polling firm, Anzalone Liszt Research, usually spends its time helping elect Blue Dogs and other conservative Democrats. Perhaps because their client base was so badly decimated in the last election, they recently turned to examining how Americans plan on spending their time off, and their concerns about summer travel. Actually what they did was interpret the Trip Advisor survey that predicts that "despite a still-weakened economy and rising gas prices, a majority of Americans plan on getting away this summer, many of them by car"-- 86% of us. (up from 83% last year).

USAToday found that 61% of Americans believe that it is important to get away from home this summer, including 36% who said that it is "very" important. Despite this, CNN cites a Reuters poll that found that only 57% of US workers take off all the days they are entitled to.

A plurality of Americans will travel within the US, finds an AOL users poll (49%), and they are traveling with family (40%) compared with 36% who are not. In May, AAA's Memorial Day study found that 88% of Americans said they would travel via car for their trips that weekend, and TripAdvisor finds that 63% will travel by car for their summer travel plans. TripAdvisor also finds that 50% of Americans traveling this summer are heading towards a city destination, and New York City, Boston, and Washington DC top the list of cities. Closely behind cities are ocean destinations (40%), and then national parks (18%) and lakes (16%).

Cost is a concern among American travelers this year, and they expect to pay more this year for their travel. USA Today finds that 71% expect to spend more on transportation costs for their trips this year, and a AAA survey finds that 39% have scaled back their own vacation plans because of the rising gas prices. AAA finds that gas prices are already nearly a dollar more expensive than last year-- last Memorial Day weekend the average gas price was $2.85/gallon; this year it was $3.91. Americans expect prices to continue to climb this summer, and 76% believe they will hit at least $4.50. Twenty-six percent expect them to reach $5, and 13% see them exceeding $5.

Rising airfare costs are an additional cause of irritation to American travelers, tying the cost of gas for their biggest pet peeve when traveling (37%) according to AOL. Twenty-one percent of Americans say they would be willing to drive up to 10 hours to save money on airfare, and 43% have had to book connecting flights to reach their destination to stay within their travel budgets. Airline fees also frustrate travelers, and nearly half (46%) believe that the checked baggage fee is the most annoying, followed by 24% who believe seat selection fees are, and 18% who are most annoyed by the carry-on bag fees. Regardless of their irritation, 72% of Americans expect fees in general to rise during the remainder of the year.

Me... I'm making the last minute touches to my summer travel plans. I e-mailed the hotel in Kathmandu and persuaded them to give us a free upgrade to a two room suite. It's low season and there's an incipient revolution in Nepal and I knew the rooms wouldn't be in great demand. It just took two e-mails to convince them. I also made dinner reservations for my first night in Hong Kong-- I'm stopping on my way to Nepal to get my Asia sea legs-- at my all-time favorite Kowloon restaurant, Hutong. I e-mailed them for a table; they e-mailed me back with a reservation for 90 minutes at one of the most sought after tables in town. Then lunch the next day at Yan Toh Heen. And... on a more mundane level, if you print out your on-demand Nepal visa application, fill it out, stick on a passport-sized photo and have your $30 cash in hand, you don't have to wait on line at the airport. So I did that too.
Posted by DownWithTyranny at 8:00 AM