The "new" Times Square is the key to revitalizing cities all over the country. (It is, isn't it?) 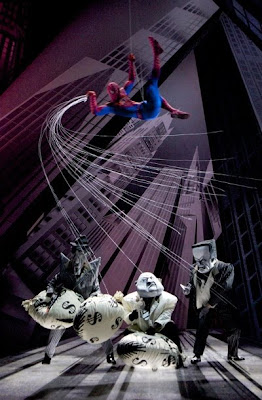 What, ya think I don't go to no Broadway shows? Yeah, I saw Spider-Man: Shut Off the Lights, or whatever the thing is called. Ya wanna make somethin' of it? (It would be nice if somebody did. The performers sure didn't seem to be having much luck trying to. This could be why the producers are shutting it down "for a brief hiatus," April 19-May 11. Good luck with that.)

These days by and large when I stagger to 6pm and the end of my workday, like as not I'd just as soon shuffle home. (And that's no express hop. If I take my least stressful homeward transit route, once I board the train I get off a mere 28 stops later. But who's counting?) The other night, though, after surprising myself by remembering to look at my calendar, I was reminded that I had a commitment: the annual meeting of New York's Municipal Art Society.

This is the first time I've ever been an MAS member at the time of the annual meeting, and therefore eligible to attend. (I joined for the excellent MAS walking tours, and in fact have two coming up this weekend -- I just hold my knees hold up. Why, today I got around to poring over the April-May calendar I brought away from the meeting and signed up for four more tours.)

I get lots of e-mail from the MAS, and once I've checked out the upcoming tour listings, I often actually read about of the society's real business, which is monitoring and advocating for a host of urban quality-of-life issues. Great stuff! It seemed only logical to RSVP my attendance at the annual meeting. Besides, there was the promise of some sort of reception afterward. Although I am widely known in my admittedly narrow circle for the motto "Free isn't necessarily a bargain," the offer of free food nevertheless gets my attention.

I arrived early, as I often do -- my only weapon against the familiar horror of wheezing in late. I found a nice seat in the spacious theater where the meeting was held -- in the Times Square area, the them of this year's meeting being the miraculous regeneration of the area over the last 20 years --and tried my best not to wish I'd been able to go home.

In fact, the meeting was fine, and I'm glad I went fear of arriving late, And then talk turned to the impending annual meeting, at which there would be speeches and a panel discussion and election of new board members (who'd actually already been chosen; they were just going to be ratified) and even a reception afterward. Somehow in this telling it sounds even less interesting than it turned out to be, but the thing is, since I was a member, I got to go, and I did. And I'm not sorry I went.

For one thing, among the on-the-stage people there were a number with names I sort of recognized for their history of civic involvement. It was nice to attach faces and bodies to the names, and to see these very grown-up people really making a difference in their (our) community. During the president's talk about the society's agenda for the coming year, I actually got out a pen and jotted down the 11 items he announced for "our" Livability Watch List for the year, and it all sounded pretty darned good. Assuming I can read my notes, I could listen them for you, and I think you'd agree that they sound pretty darned good. Oh wait, I can crib them from the MAS website, which is where you'll find brief descriptions of each, with links to fuller discussions.

The MAS 2011 Livability Watch List is a compilation of the 11 initiatives that will have the most significant effect on livability in New York City this year. As the leading organization dedicated to creating a more livable New York through intelligent urban planning and design, MAS will call attention to these 11 through advocacy work, public programming and issues monitoring.

Stay tuned to MAS.org for updates and watch for announcements on MAS programs that will explore our 11 for 2011.

Serious stuff, right? Okay, in most cases you'll have to check out the website link to find out, for example, "Well, what about the Garment District, or Changing Streets?" But I do believe that a lot of people with their hearts in the right place have put a lot of time and effort into this, and come up with serious initiatives.
So it was all inspiring in its way: all these serious grown-up people devoting all that time and effort to making the city a more vibrant, livable place. I truly admire what they do, even as I know that that probably sounds like the prelude to a "but" which will lead to some bashing of what they do.

I won't bore you with an extended recap of the speeches. The keynote was given by Rocco Landesman, whom most of us know as, until recently, the head of Jujamcyn Theaters, operator of five Broadway theaters and thus one of the largest players in the city's live theater industry. He stepped down when he was named by President Obama to head the National Endowment for the Arts. And I jotted down some keywords from his speech too, which was also inspiring. Rocco was a major player in the Times Square revival -- after all, the financial health of Jujamcyn's theaters depended on lots of people wanting to come into the area, which for many years they had been not so eager to do because it had become so run-down and dangerous. 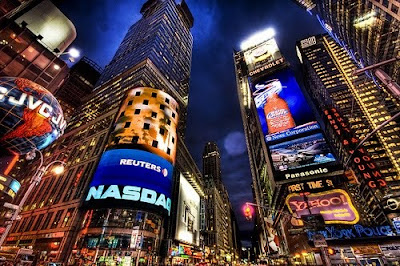 The turnaround, all present agreed, was nothing short of miraculous. It is also, Rocco explained, a model he is encouraging at the NEA to cities around the country: using the arts as an engine for urban revival. And even I was feeling kind of warm and toasty. I jotted down some notes from his presentation too.
Until I realized that I seemed to be the only person on the premises who wasn't entirely persuaded that the "rebirth" of Times Square was such a miracle. Oh, lip service was paid to the specter that had haunted the planners in the process of rebirthing the area: gentrification. You got the feeling that they weren't so much afraid of gentrification as they were afraid of being accused of gentrifying. Now that the grand project is complete and such a universally acknowledged rip-roaring success, it was possible for a certain number of those present to giggle at the very idea of the threat of gentrification.
When the floor was opened to audience questions, one questioner accused the panel participants of failing to give proper credit to Disney for the renaissance. The panelist most involved explained that yes, Disney had been important, because it lent credibility to the idea that the area could be reborn, but in fact the plans were in place before Disney signed on. 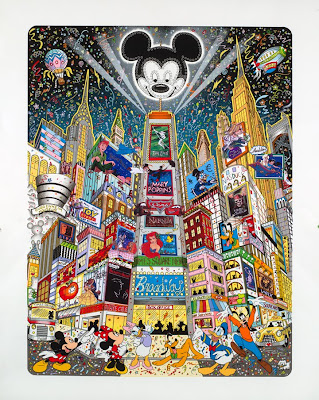 Who couldn't love the new Times Square?
To an extent, the lip service paid to apprehension over gentrification extended to pretending it hadn't happened, or not entirely. There was much satisfaction over the fact of the new Times Square being built on the old, and it's indeed true that much of the Broadway theater business was preserved -- surprisingly few of the commodious old theaters have been lost. Of course the serious part the Broadway theater business today is only serious about business, and has switched to the big monster houses, suitable only for high-noise "musicals" whose sound is delivered entirely as an electronic assault -- it's hard to know why audience members even need to be in their seats. Probably they have better-sounding sound systems at home on which they could listen to the proceedings in better sound as well as greater comfort.
The sad reality is that the Broadway theater as any sort of cultural medium has been dead for decades. It would go too far to say that the rebirth of the area killed it off. It was mostly moribund already, although the neighborhood in its rundown "depressed" condition probably made it possible for a certain number of shows of some actual artistic consequence to find temporary lodging.
So no, it's not really the death of artistic seriousness in the Broadway theater that I'm mourning now that Times Square is all improved. No, it's more that there's hardly anything to do in the improved Times Square. It's like a giant theme park, only without any rides. Just wildly overpriced restaurantlike businesses serving swill that barely qualifies as food and enormous clutches of selling even more wildly overpriced, well, stuff. What I see is one giant tourist trap, to use the old-fashioned term.
It's obviously a minority opinion that there's nothing to do in the new Times Square, because it's now routinely packed. At peak hours both the sidewalks and the streets are almost impassable. But I'll be damned if I can figure out what they're all doing, unless it's just to spend down a dangerous oversupply of time and money which seems to afflict these folks.
I used to have a dozen or more frequent destinations in the area, and probably another couple of dozen occasional ones. They're now all gone. Awhile back, when my friend Richard invited me to join him at a preview performance of Spider-Man: It's Dark in Here! -- it wasn't supposed to be a preview performance when he bought the tickets, but as of now, and for the foreseeable future, there haven't been anything but preview performances -- and we tried to find someplace to eat afterward, we were stumped.
Now you must understand that Richard is practically psychic when it comes to divining decent places to eat. None of his finely tuned sensors yielded anything. Oh, there were lots of restaurantlike establishments, but you could easily see which gimmick each was peddling, and none of it held much promise of edible food. So we settled for the outlet of a famous national chain, and after I gagged at the prices, I gagged at the turkey burger I was served. I'm not a food sender-back normally, but inedible is inedible. I swapped it for a cheeseburger that for my 28 bucks was at least edible. 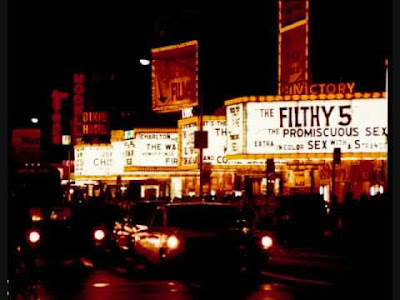 Oh man, The Filthy 5 and The Promiscuous Sex Whatever (does it really matter? what could be bad that starts with "The Promiscuous Sex . . ."?) -- plus Sex with Stran[gers] (I'm guessing) too??? Were those the days or what?
Now I understand that the dark and dangerous old Times Square wasn't good for business, and what's bad for business isn't good for a city that has always depended on commerce. Still --
Again, it's undoubtedly just me, but I never found the old Times Square especially dangerous or depressing. To me it was filled with life, just as through most of its history New York City has enjoyed such a rich mix in that commerce it depends on that diversity of experience, including cultural experience, was built into the mix. Oh, sometimes it was messy, but it was vibrant, and alive. And once upon a time, somehow, a lot of people made a living there as well.
Most of the people I know feel pretty much the same way, but then, in the grand economic scheme of things, even though each of us actually spends a decent amount of money, we don't spend it in the safely predictable mass-group way that the people who mob the new Times Square do. And in the end, it's their money that drives this particular economic machine, even if it's being driven to noplace special.
#
Posted by DownWithTyranny at 9:00 AM