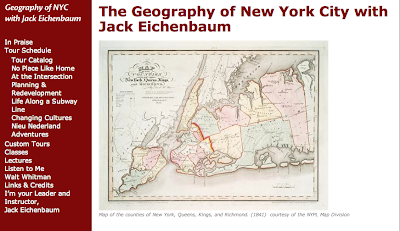 I'll explain in a moment why I'm presenting this screen shot from Jack Eichenbaum's "Geography of New York City" website, geognyc.com, which I encourage anyone interested in getting to know NYC better to check out. (You can click on it to enlarge it for enhanced readability.)

In writing sketpically last night about the "miraculous" transformation of Times Square, which NEA Chariman Rocco Landesman (who as head of the Jujamcyn Broadway theater chain played an active role in that transformation) explained in his keynote speech at the Municipal Art Society's annual meeting this week he is promoting as a model for cities all over the country seeking major new development, I mentioned that I had joined the MAS for its walking tours. Tonight I want to talk about that a little more, and in the process clue you in to this exciting upcoming opportunity, which may not be quite once-in-a-lifetime but is so exciting, at least to me, that I want to try to spread the word to people who would jump at it if only they knew about it.

(Again, if you want to skip the blather and get straight to "the exciting opportunity," feel free to scroll down to "THE EXCITING OPPORTUNITY." I won't take it personally. Well, that's not quite true. I suppose I take everything personally, but that amounts to the same thing.)

I also mentioned last night that I had two MAS tours booked for this weekend, and by coincidence, for those who believe in coincidence more than I do, today's happened to offer which are surprisingly inexpensive, especially for members (typically the two-hour tours are $10 for members, $15 for nonmembers; longer ones -- including several of the new ones I signed up for yesterday -- are naturally more expensive, but not much), and surprisingly (at least to me) helpful in enabling you to look at even parts of the city you may have thought you knew pretty well and begin to see them through the eyes of someone who has better, smarter ways of looking at them.

I suppose major cities have always had walking tours of a sort, but the kind of historical-mindedness that has made them flourish seems to me a phenomenon of recent decades. And for me the whole thing is brand-new. I don't know why I waited this long to avail myself of the opportunities; on any given weekend day there seem to be dozens of them around the five boroughs, and for that matter stretching into the whole metropolitan area. I guess I've done so much tramping around at least portions of the city over the decades I've lived here that I mistakenly imagined I didn't need that kind of "prompting." In fact, even with all that tramping, there are large swaths of the city that are pretty much terra incognata to me, and as I just said, I've learned as much touring parts of the city I thought I knew pretty well.

Times Square, to pick a random example. Last night I described the sense of aloneness feeling that I was the only one at the annual meeting of the MAS who wasn't so absolutely certain that the miraculous rebirth of Times Square over the last couple of decades is miraculous but harbored the whisper of a doubt that it's even a good thing for the vitality of the city. I'm sure I was exaggerating. It felt that way, especially when that audience member challenged the two-person panel on the Times Square rebirth for failing to give enough credit to Disney. For some of us the mind-numbing blandness and mush of Disney is an all too apt symbol for, well, the mind-numbing blanndess and mush of the "revitalized" Times Square, which seems to exist to shake fistfuls of moolah out of folks who, in fairness, seem only too eager to spend it, on crappy blockbuster musical entertainments, wildly overpriced schlock merchandise, and wildly overpriced schlock food.

It might be stressed that what Chairman Rocco, an honorable man who seems to genuinely believe in his vision of using the arts as the basis for economic redevelopment, understands by "arts" does seem to place a premium on crappy blockbuster musical entertainments. There actually are other visions of urban life, cultural life, and urban cultural life. The problem is that while there are a lot of people out there who might support their efforts, they're scattered and hard to find, whereas the audience for what Chairman Rocco understands by "arts" seems to be out there in abundance just waiting to be told what to do to be officially "entertained."

My MAS tour today put me squarely in contact with the other end of the arts spectrum. It was a "tour" of the East Village block of East Fourth Street between the Bowery and Second Avenue which has become the city's second-only designated "cultural district" (and the only one in Manhattan; the other is in Brooklyn, around the Brooklyn Academy of Music, of which our guide for this tour, Lawrence Frommer, will be leading an MAS tour on June 4), a block on which numerous shoestring arts organizations had taken root, and by coincidence (again?) the block on which one of the city's most storied theater enterprises, the late Ellen Stewart's LaMama E.T.C., found its enduring home.

It was a thrill to encounter the passion and energy of the director of FAB (Fourth Arts Block), the nonprofit organization founded in 2001 to give these for the East 4th Street Cultural District, who joined us on the tour, and also introduced us to some of the people working on that block. Tamara and her associates play all the angles, working with government and funding organizations as well as community businesses to help sustain and promote the life and activities of the district arts organizations, and indeed organizations outside the immediate district with which FAB networks. The kind of art they promote clearly isn't for the mass audience to which shows like Spider-Man: Get Off My Lawn are aimed, but they're essential to the vitality of city life, and indeed make the city a vastly more livable place.


THE EXCITING OPPORTUNITY: AN ALL-DAY PILGRIMAGE
ON THE NO. 1 TRAIN, NYC'S INTERNATIONAL LIFELINE

What got me started on this whole walking-tour thing was a bunch of the New York Transit Museum's tours, including an especially illuminating one about the engine for economic development created by transit "nodes," places where multiple subway lines intersect, starting with Times Square, which is unlike anyplace else in the city, sitting as it does atop the Sixth Avenue IND, Broadway BMT, Seventh Avenue IRT, Eighth Avenue IND, IRT Flushing, and crosstown shuttle lines. The guide for that tour, Queens's borough historian, "urban geographer" Jack Eichenbaum, had an uncanny eye for pointing out the buildings and street life of the area reflect the history of the area's transit development, and then he did the same for Queens Plaza and Jackson Heights in Queens.

The subway lines crossing those Queens nodes in both cases include the IRT Flushing line, the No. 1 train, which is one of the city's most fascinating lifelines, a veritable international lifeline. And on April 30 Jack is offering what he describes as his "signature tour."

I got my check in the mail the day I saw the announcement. This promises to be a memorable occasion, and I know Jack still has openings. Frankly, I want to make sure he's got enough people registered to make it a "go." So I want to be sure all the people who would want to know about it do know about it. Spread the word!

And Jack's got a bunch of other tours coming up, both for the MAS (he has one next Sunday, April 10: "Conforming to the Grid: West Side," the sequel to an earlier "East Side" version, which I unfortunately couldn't get to; these tours are in commemoration of the 200th anniversary of the adoption of the street-grid plan that charted out the future development of Manhattan) and on his own (including weekend afternoons devoted to Long Island City and a fascinating-looking series of Wednesday-evening tours under the rubric "Changing Cultures of Queens: A Walking Anthology"). If you're in the area, do yourself a favor and check out the "Public Tour Schedule" on his website.
#
Posted by DownWithTyranny at 9:00 AM

wonderful, but what about the boroughs? they give NYC their flavor. yes to subway and walking tours. but have to check out the ethnic enclaves of queens and brooklyn. take the bus. just you and a metrocard, and amazing opportunities!