Is Morocco Still Safe For Tourists?

In the past I've always maintained that Morocco is a wonderful and safe place for tourists to visit-- and I've been there over a dozen times, starting in 1969. The post linked above is from 6 years ago. Lately I've come to the conclusion that it's still wonderful, of course, but not quite so safe. Nowhere in the Middle East/North Africa region is. Last time I was there, this past December, I rented a riad in Marrakech, one of Africa's most cosmopolitan cities. Yesterday my friend Helen alerted me to a terrorist attack aimed right at the heart of Moroccan tourism.

In Marrakech all roads lead to the Jemma el-Fna, the main square of the old city, and no matter where you're going in town, you start and you end there. Even distances are measured from how far it is from the square. It's been crawling with tourists-- sometimes thousands and thousands of them-- for decades, if not centuries. The cafes that line the sqaure may not serve the best food in town but theey're the most popular because of their locations and their rooftop terraces. I suspect there'll be a lot of people canceling their reservations now.

A massive terrorist bombing tore through a tourist cafe in the bustling heart of Marrakech's old quarter Thursday, killing at least 11 foreigners and three Moroccans in the country's deadliest attack in eight years.

At least 23 people were wounded in the blast a few minutes before noon in Djemma el-Fna square, one of the top attractions in a country that depends heavily on tourism, Moroccan Interior Minister Taib Chergaoui said.

Government spokesman Khalid Naciri told the AP it was too soon to lay blame for what he called a terrorist attack but he noted that Morocco regularly dismantles cells linked to al-Qaida in the Islamic Maghreb and says it has disrupted several plots.

April marks the start of Morocco's tourist season, when visitors gather to watch snake charmers, storytellers, jugglers and local musicians, filling the cafes that ring the edges of the iconic square on the route to the city's major open-air souk, or market.

Death toll has grown to 16 now. We'd eaten at the Argana several times, mostly because it was a place to hang out to watch the circus that is the Jemma al-Fna. There are half a dozen other places just like it. Moroccans are determined to kick out the plutocratic old regime. It's going to be very painful. There couldn't have been a more effective way than this to deal a major blow to Morocco's economy. 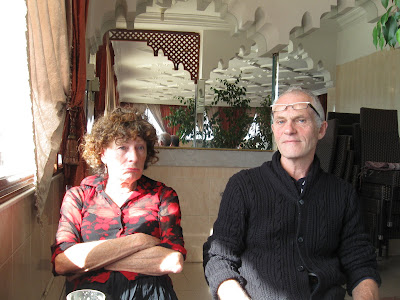 4 months ago Helen took this photo of our friends Mieke and Toon on the Argana terrace, where the bomb exploded this week

The pressure's definitely on and I'd think twive before booking tickets to Morocco any time soon. Today Hisham al-Miraat, co-founder of Talk Morocco, posted a warning at Foreign Policy called Showdown In Morocco. Short version: the Arab Spring is turning into an Arab Summer and it could get pretty hot.

The makhzen refers to an ancient institution in Morocco-- the extended power apparatus close to the Moroccan monarchy, made up of a network of power and privilege. It allows the King to act as an absolute monarch and the de facto head of the executive. Beneath the give and take of everyday politics, the makhzen has always been the ultimate guarantor of the status quo. For three months, the pro-democracy youth movement, known as "February 20," has been advocating against that status quo. Protests have not been targeting the monarchy directly, but instead have been urging for reform that would yield a system in which the King reigns but does not rule.

What started as a small group on Facebook earlier this year, has since grown into a nationwide movement made up of a loose coalition of leftists, liberals and members of the conservative Islamist right. Inspired by the Tunisian and Egyptian uprisings and powered by new media, the movement convinced hundreds of thousands to take to the streets. The demonstrations held week in, week out, were remarkably peaceful. In response, King Mohammed VI promised a package of constitutional reforms to be submitted to a referendum in June. But as protesters, unconvinced by the King's promise, vow to keep up pressure on the regime, authorities seem increasingly impatient and determined to break up protests violently, paving the way toward escalation and confrontation with the street. The middle class is joining the mass of demonstrators, moving the protests beyond the core of mobilized youth. Their target is the makhzen-- which has become a code word for the monarchy's abuses of power and monopoly over large sectors of the economy.

...[O]n April 28 a terrorist bomb attack hit a popular restaurant in the heart of Marrakech, killing 17 people. The country was plunged into a state of shock. Beyond the unanimous condemnation, the timing of the attack raised many questions. The fear of a security clampdown and a freeze of liberties were the main concerns of pro-democracy advocates. Their fear is justified. The makhzen has traditionally actively sought to nurture an image of stability-- an exception to the turmoil in the Arab world. That strategy has worked for a time for the regime: Morocco is routinely praised by western officials as an ally of the West in a rather hostile region. The country holds an advanced status with the European Union; it has signed a free trade agreement with the U.S.; it is actively cooperating with the Americans in their global "War on Terror," and it enjoys the status of a Major Non-NATO Ally. The specter of terrorism has long been a useful card for gaining external support.

Police violence in recent days has escalated. On May 15, peaceful demonstrators who wanted to protest in front of an alleged secret detention center in Temara (dubbed Guan-Temara by protesters) near the capital Rabat faced repression. A week later, anti-riot police systematically and violently disrupted peaceful gatherings in public squares. This may be the sign that the regime is shifting its attitude toward the street and taking a much more hardline stance. As with other Arab regimes, the makhzen faces a dilemma: if it clamps down hard on peaceful protesters, it risks loosing its reputation as a model of democratic reform in a region often perceived in the West as averse to the liberal ideals of democracy. If it loosens up, then it will have to face the challenge to its own existence posed by a determined and organized street.

The "February 20" youth movement is vowing to keep up street pressure, rejecting the King's offer of token reform. If the regime insists on denying the people their rights of assembly and free expression, then the country will be heading toward the unknown. Against the backdrop of the Arab revolutions, change looks inevitable. It is still in the power of the monarchy to ensure a peaceful transition and at the same time ensure its own survival. The more the makhzen drags its feet, the more it runs the risk of undermining the stability of the country and, at the end of the day, its own existence.

Things are beginning to come to a head in Morocco's big cities as the monarchy takes off the gloves and prepares to kill anyone and everyone who wants to change the system. The corrupt regime will fall but it will be very bloody.
Posted by DownWithTyranny at 3:24 PM