The Sad Death Of The Queen Of The Skies 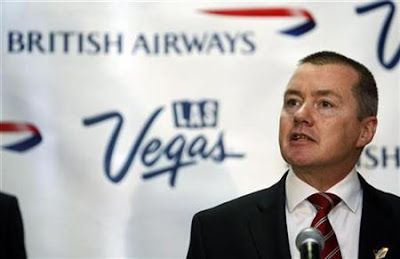 When Zagat first started their consumer-driven restaurant guide, I was one of their very first reviewers. I ate out a lot-- and in a lot of cities. A few years ago they started another guide, one for airlines. I fly a lot too, and they asked me to be one of the initial reviewers. There are 6,000 reviewers now and tihs past year I once again voted for British Air as my favorite overall airline. That's probably the last time they'll be getting a positive score from me. For decades I've thought of them as the gold standard of high quality, professional service. I like Singapore and Virgin well enough and Cathay has been pretty good-- if headed in the wrong direction lately-- but all the airlines that are good, always seem to be imitating and trying to catch up with B.A. Those days are over.

B.A. is hurting. Financially they're a mess and abysmal management has driven the company into a hole they're not going to recover from witouth a complete managerial overhaul. Yesterday I flew from L.A. to Rome. Instead of it being the first fabulous part of a trip-- the way I've always considered flying on B.A. flights-- it was a horror show from beginning to end.

Early in the day, the flight attendants union voted to strike on December 21 and come back on January 2. When I called for advice about what to do to prevent myself from being stranded abroad, I could have been talking with someone from Delta, American or United or any airline that puts its customer service department through a rigorous training procedure on how to frustrate and infuriate customers. I spent well over an hour on hold and talking with two customer service clerks and in the end, got nowhere. They said that I could cancel my tickets but since the airline hadn't "officially" cancelled my flight home-- and probably wouldn't until I got to the airport in January-- it would cost me $250 to cancel. And I was lucky because I had purchased a refundable ticket!

I decided to take the gamble-- while the company's disastrous boss, Willie Walsh, postured and acted the tough anti-union thug in public-- and I was immediately sorry when I got on board the flight. Only one of the 3 restrooms was functioning in the business class cabin-- and it was in a sorry state of cleanliness right from the beginning. The whole cabin was in a shoddy condition in fact, way below the B.A. standards that have always attracted me to the airline. It looks like one of the cost savings was those paper toilet seat covers. The crew was the dregs, the sound system wasn't functioning enough to understand a word anyone ever said. And, the food was as bad as you can expect from a third-rate flying garbage truck. Poor British Air!

And poor me! The flight was late getting in and although I made it-- with a second or two to spare-- onto my connecting flight from London, my checked luggage didn't. It still hasn't. They claim it arrived in Rome but they seem to have lost it again. "Seem to," because communication is not a strong point. Last night I stayed in all night waiting for the promised bag; didn't even have dinner. But this morning-- still no idea where my bag is or when-- or even if-- I'll ever get it back.

As the Guardian put it today "the way Willie Walsh has handled this dispute will end up in the MBA textbooks-- as how not to do it. Just over two years ago, the BA boss hailed a new era in its often-troubled industrial relations. Now the atmosphere between management and workforce has become more poisonous than ever. Both sides risk sleepwalking into a strike that neither really wants. They should be forced-- by government if necessary-- to negotiate with each other. Carelessness is no excuse for destroying a business." Too late for that; they need to rid themselves of Walsh and get back to the days when they understood what it meant to build customer loyalty instead of contempt.

Posted by DownWithTyranny at 4:48 AM