Is Rome A Safe City To Visit? 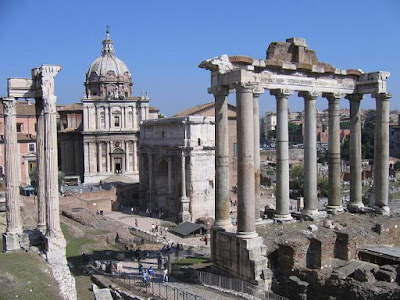 That's a bizarre question and the obvious answer is that it's as safe-- or unsafe-- as New York or London or Paris or Chicago or Bangkok or L.A. No doubt if you look hard enough, you can find trouble anywhere. I only even bring it up because in Rick Steves' Rome 2010 he inexplicably seems to dwell on all the misery that can befall a hapless tourist at the hands of Romans determined to ruin everyone's good time. I guess he's just doing his due diligence when he warns his readers that "[w]ith sweet-talking con artists meeting you at the station, well-dressed pickpockets on buses, and thieving gangs of children at the ancient sites, Rome is a gauntlet of rip-offs. While it is nowhere near as bad as it was a few years ago, and pickpockets don't want to hurt you-- they usually just want your money-- green or sloppy tourists will be scammed. Thieves strike when you're distracted. Don't trust kind strangers. Keep nothing important in your pockets. Be most on guard wen boarding and leaving buses and subways. Thieves crowd the door, then stop and turn while others crowd and push from behind. The sneakiest thieves are well-dressed businessmen (generally with something in their hands); lately many are posing as tourists with fanny packs, cameras, and even Rick Steves guidebooks. Scams abound..."

Jesus, he makes it sound like hell, and especially singles out "groups of city-stained children (just 8-10 years old-- too young to be prosecuted, but old enough to rip you off) troll though the tourist crowds around the Colosseum, Forum, Piazza della Republica, and train and Metro stations." Jeepers, that's my neighborhood. In fact, I spent the day walking around the Colosseum, Forum, Victor Emmanuel Monument, Capitoline Hill, conveniently, the smallest of the 7 hills of Rome. Maybe the gangs of trolling 8-10 year olds only come out in summer. Winter is cold in Rome. There were few tourists and no marauding bands of banditos.

I've felt safe from the moment I arrived. I'm staying in a flat in an old palace, Palazzo del Grillo, built in the 1600s. I'm sitting at my desk on my new MacBook Air and right out the window, literally spitting distance, are the fenced in remote ruins at the back of the Forum (Foro di Nerva I believe). It's an amazing juxtaposition. If there are ghosts-- and I'm sure there are-- they are friendly, or at least pacific. The vibe is tranquil and... safe.

The neighborhood, Monti, is slightly off the beaten track-- the other side of the Forum being where all the action is and all the crowds. In ancient days it was a crowded home to thousands of poor people and brothels. Now the cobbled, winding streets have a special charm, slightly removed from the hectic turmoil of the city around it. A couple of nights ago, I went for a walk the other night and ran across a street party, dozens of people in the street in front of what turned out to be a gallery. Someone invited me in and I was astounded by the exhibition: hundreds of mounted photographs that told the history of Monti from the late 1800's to the present. I spent hours marveling at how the area had changed-- and how it hadn't. There were even pictures of Mussolini and his black-shirted cohorts walking the same streets I was on.

If there is any sense of danger at all, it's that the drivers are all-- every single one of them-- talking, sometimes quite animatedly-- on cell phones or texting. The traffic seems deadly, although when I got out in it today, I noticed that everyone takes care not to hit anyone and they do slow down if you walk boldly into a crosswalk and stare at them. As for violence... well Berlusconi got slammed in the face with a statuette in Milano, not Roma-- and everyone knows how much the Milanese hate Rome, the Romans, and the central government.

I found an organic grocery store not far and went shopping and I've mostly been eating in while I kick my jet lag and wait for my lost/supposedly found luggage. But last night when I was making my way around Monti, I dropped in to a restaurant that is supposed to be impossible without reservations, F.I.S.H., Fine International Seafood House. Indicative of the season, it was nearly empty and I'm getting the idea that everything that usually hard to get into, from the forbidding lines at the Vatican to La Pergola on the roof of the Cavalieri Hilton. Anyway, F.I.S.H. was very hip and chic, with groovy music and an interesting seafood menu that mostly tended towards the pan-Asian. I had a cream of zucchini soup that fantastic, followed by a delicately curried tandoor sea bass that I can't get out of my mind 20 hours later!

After the above bravado about how easy it will be to get into La Pergola, I decided to call and make a reservation for about two weeks from now-- fulled booked then... and every day before then! Tomorrow I'll be braving the lines at the Vatican at 8:30AM.

Now, this is when the area wasn't safe at all:

Posted by DownWithTyranny at 8:15 AM