TAKING THE FERRY TO CEYLON (BEFORE IT WAS SRI LANKA) 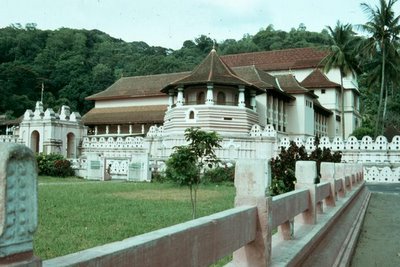 The first time I went to Sri Lanka it was 1970. It was about the most faraway, exotic place I had planned to go to on my drive across Asia, a place I had always fantasized about. After months in India, anything would be a breeze so I had no trepidation whatsoever when I set out for Rameswaram from Cochin in Kerala. The road wasn't great and I can remember that I never saw a plate or eating utensils on the whole drive south; all food was served on banana leaves. I guess its kind of a truism to say that the food got spicier and spicier the further south you ventured, but even a truism is based on something. I love spicy food and it didn't bother me at all. South Indian cooking is very different from North Indian cooking and I dove in wholeheartedly. The roads were definitely not as good as the food. I remember once there was a big boulder in the middle of the narrow road but I realized immediately it was a trap set by decoits (bandits). Fortunately they were lethargic and lame and we somehow managed to avoid being killed or even interacting with them.

I can't remember who I was with at this point. I used to meet people who liked the convenience of a nice new VW van. They got transportation and paid the gas and other car-related costs. I was thoroughly broke at this point, having run out of whatever money I had in Goa. All I remember about the Cochin to Sri Lanka crew is that everyone got tattoos when we got to Jaffna except me (who thought a- it was probably unsanitary, and b- it would nix any chance I had of being buried in a Jewish cemetery if I ever changed my mind about the religion thing). But I'm jumping ahead of the story.

After outsmarting the decoits and arriving in Rameswaram, I don't recall much about the town. Supposedly it's a big pilgrimage scene but I don't recall anything but it being a small, grimy port town with a ferry that crossed the Palk Strait to Talaimannar at the tip of a small peninsula that jutted out of northwestern Ceylon (which is what Sri Lanka was called then). The problem was that the ferry was too big for the port at Rameswaram and one had to be rowed out to the ship on a small boat. My recollection-- colored by unabated terror even after 3 dozen years-- can't possibly be precise. They put a wooden plank between two small boats and had me drive my van (which was my entire universe at the time-- and not insured) onto it, so they could row it out to the ship which had a crane to lift it aboard. It sounds beyond belief-- even to me! But what I do remember in vivid detail is being on the ferry with my van hanging in mid-air, courtesy of the crane, and a representative of the Indian (or Ceylonese) maritime workers union approaching me for some baksheesh. It was a smart time to ask because I was thoroughly terrified and in no position to dicker, something I had become quite adept at in the preceding year. I think he wanted $6 or 7 and, although that put a serious dent in my budget, I was happy to give it to him and get my van back safely. The Ceylonese side had a pier where the ferry actually docked.

I forgot to mention that I was smuggling. I had found that the Ceylonese wanted cheap saris from India and the Indians wanted large tins of coconut oil from Ceylon. No one ever checked the van for anything ever. I made a lot more money later in the year smuggling alcohol from Pondicherry, the old French (Christian) colony just south of what was then called Madras (now Chennai), to Madras' YMCA where Muslim gentlemen put out by Madras' dry laws were eagerly waiting. Like I said, no one ever checked the van and I scraped up enough to live for a month or two at a time.

There were literally no tourists traveling this way; I mean I never met one driving around southern India the whole time. So we had no real advise about what to do or where to go. I suppose the normal thing would have been to drive south to Colombo. So, of course, I drove north to Jaffna, the Tamil city. I remember it being a big, busy exotic city without a lot of charm, but with delicious food. I remember eating omelets cooked in coconut oil; HEAVEN! The taste stayed with me for decades and eventually brought me back to Ceylon (by then Sri Lanka) for another visit. Everything was cooked in coconut oil. I bet you didn't know that coconut oil is very healthy, did you? We were all brainwashed into thinking it was horribly fattening and disease-causing. But that's completely false.

My more recent memories of Sri Lanka are going to be a lot more vivid and useful and I'll try to get them down this week. I don't remember much about the first trip beyond the tastes and smells... and the beautiful tropical beaches. It was a real chill-out time for me after the hustle and bustle of all-consuming India-- kind of like a vacation. I made a point of circumnavigating the island-- something that is impossible now because of the guerilla war and I can remember a few towns that I really liked standing out, Walauttu, Batticaloa, and Trincomalee on the east coast, Hikkaduwa, Hambantota and Galle on the glorious south coast, Nuwara Eliya, Kandy (home of the sacred Temple of the Tooth; see photo above), and Anuradhapura in the middle. I never stayed at one hotel, just slept in the van or on the beach every single night. I have a recollection of swimming and lounging around the beach during the hot days and then driving into the cooler highlands to sleep at night.
Posted by DownWithTyranny at 9:13 PM