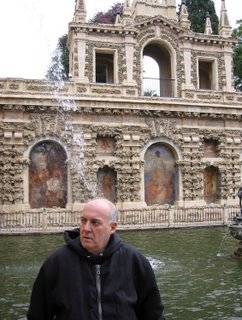 Seville has been one of my favorite places in Spain since I started visiting that country in the late 60s. Except for the times that I was strictly on business in Madrid or on a short vacation in Barcelona or Ibiza (while I was living in Holland), I always went out of my way to include Sevilla in my itinerary. The capital of Andalusia has a unique and beautiful ambiance that very clearly marks it as special and alluring. In December we took a train to warm and sunny Sevilla (and Cordoba) on the way from chilly Madrid to Morocco. The express from Cordoba takes 45 minutes.

I had decided to make the big hotel splurge for this trip Sevilla's Alfonso XIII, a hotel that was built specifically (in 1928) to be the grandest and most luxurious hotel in Europe. Nearly 80 years later and it still is truly awesome.
Sometimes it seems as though all the grandest sights of Sevilla were placed around the hotel-- from the beautiful Guadalquivir River to the Cathedral (the world's biggest gothic structure and the 3rd largest church in Europe) to the breathtaking 14th century Alcazar, Europe's oldest royal residence still in use. The rack rates are prohibitive (starting at around $500 for a double) but the Alfonso is a Westin Hotel and my old corporate travel agent was able to work wonders with a great discount and a spectacular upgrade. Everything about the hotel bespeaks value for your money, something I like. I mean it went beyond the most beautifully and luxuriously appointed rooms of the whole trip; the Alfonso even has the best, most professional, knowledgeable and empathetic concierge we ran into on the trip.

Everywhere you look within walking distance from the Alfonso is just spectacular. We ate up the tourist sites like the Cathedral and especially the Alcazar and loved walking around the Barrio de Santa Cruz (the old Jewish ghetto that is now a charming, vibrant functioning medieval town within the city). If you want the best in Seville, there is no other choice besides the Alfonso. Restaurant-wise, on the other hand, you have a lot of great choices-- chefs that are serious about catering to regular clients, not thinking about how to feed transients. On a couple of past trips I had tried the Egana Oriza, probably Sevilla's best eatery, and loved it but this time we decided to decided to give a less well-known place a shot. The Poncio (Calle Victoria 8 in the Triana District) is on the other side of the river and a bit of a trek by foot-- but that's partly why we chose it. Both of us love walking around cities and feeling the pulse of daily life.

The chef, Willy Moya, came to our table and we talked for a while about what we wanted in a general sense and he was able to recommend an incredible dinner for each of us. He's an inventive and brilliant chef and this was one of our best meals in Spain. Roland is still raving about some wild baked ice cream and olive oil concoction he scarfed down and was swearing he had just had the best wine in his life (although he tended to say that about every meal). I was pretty surprised that the cost was about half of what a meal like that is in a comparable Madrid restaurant.

The main bus stop is walking distance from the Alfonso and we took the bus to Algeciras to catch the ferry to Tangier. It was all easy to arrange and completely hassle-free.
Posted by DownWithTyranny at 3:24 PM