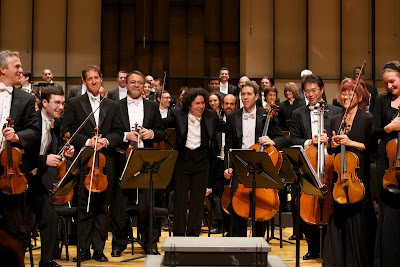 If you've been following this blog, you have probably figured out that I'm kind of an intrepid traveler, in as much as I travel a lot and have been for a long time and I go to some whacky places-- from Tierra del Fuego to Lapland and from Mali to the Himalayas. But what I'm not is swashbuckling or heroic. I'm not making plans to visit Somalia, Yemen, Iraq, Syria, Congo or anyplace I feel is legitimately dangerous. It doesn't keep me from visiting places like Mumbai, Jerusalem, Bangkok, Mexico City, London or New York City-- all places that report dangerous situations from time to time-- but I try to be careful. So I really had to laugh when some friends in the L.A. Philharmonic said they were worried about a trip to Caracas. Grammy winning conductor Gustavo Dudamel just brought the orchestra down there for the series of Mahler's symphonies they just finished performing in L.A. Earlier today, the NY Times applauded the whole endeavor-- and so did Venezuela:

El Sistema, Venezuela’s national music program aimed at young people, put on a major show of orchestra playing and singing for the visiting Los Angeles Philharmonic, its staff and patrons, who are in town for a Mahler symphonic cycle. But the attention of the enthusiastic crowd of young performers, parents and others around the Teresa Carreño Theater was focused on José Antonio Abreu and Gustavo Dudamel.

Mr. Abreu, El Sistema’s stooped but mentally vigorous patriarch, and Mr. Dudamel, the program’s most famous product and the Philharmonic’s music director, were mobbed. When Mr. Dudamel went to greet some young musicians in the cello section, they burst into exciting bobbing. “Gustavo!” people shouted from balconies... [T]he atmosphere was redolent of the sometimes religious-seeming trappings of the culture of El Sistema, whose exponents speak of love and peace and remain involved for decades. El Sistema’s proponents are indefatigable evangelizers for its mission of helping the poor through classical music.

The musicians had been sternly warned before embarking from L.A. how dangerous Caracas is and they were warned not to leave their hotel rooms. Sound screwy? It is-- and it's based on what? Corporate America's hatred for and propaganda against a national leader who sticks up for the working people of his country. I hope no one locked themselves in their hotels rooms. It would be a real waste.

Perhaps more realistic-- at least to some extent-- was this week's travel warning from the U.S. State Department about Mexico. I travel there a lot and have never run into anything I would consider dangerous. In December we spent the better part of a month in Mérida, capital of the Yucatán. Nice and relaxing, except for the mosquitoes that gave me dengue fever. But the warning isn't about dengue fever-- or the Yucatán.

The State Department advised Americans this week to defer “non-essential travel” to vast stretches of Mexico, warning that 14 of the country’s 31 states are so dangerous that visitors should avoid them if at all possible. For four other states, it counseled caution or extreme caution.

The travel warning is at once broader, more detailed and more alarming than the previous one for Mexico, issued in April.

The new warning became public as Mexican troops announced Thursday that they had seized 15 tons of pure methamphetamine outside Guadalajara-- an amount equal to half of all meth seizures worldwide in 2009.

State Department travel warnings are based on internal guidance that embassies and consular offices use to decide where it is safe for U.S. diplomats and federal employees to travel, so they often err on the side of caution.

Still, this one, issued Wednesday evening, is sweeping. To begin with, it warns against all but essential travel across most of the states along the U.S.-Mexican border: Tamaulipas, Nuevo Leon (except the city of Monterrey, where caution is advised), Coahuila, Chihuahua and Sonora.

...Ciudad Juarez, in Chihuahua, merits “special concern,” the warning says, advising that the border city “has one of the highest murder rates in Mexico” and that “three persons associated with the Consulate General were murdered in March 2010” there.

Moving south, also on the no-go list for all but essential travel: Sinaloa (except the Pacific Coast resort of Mazatlan), Durango, Zacatecas, Aguascalientes and San Luis Potosi, where two U.S. Immigration and Customs Enforcement agents were ambushed and one was killed a year ago.

This means a visitor who wants to drive from the United States to Mexico City has no viable route that would be in accord with the U.S. guidelines.

If you do drive, the warning says, remember: “TCOs [Transnational Criminal Organizations] have erected their own unauthorized checkpoints, and killed or abducted motorists who have failed to stop at them. You should cooperate at all checkpoints.”
The State Department also warns against travel in Jalisco along its borders with Michoacan, another no-go, and Zacatecas.

...Mexico is a country of 110 million people, so the odds of running into trouble are low. The number of U.S. citizens reported to the State Department as murdered in Mexico increased from 35 in 2007 to 120 in 2011.

Where to go? Much of the Yucatan Peninsula is free of murder and mayhem. No advisory is in effect for the states of Chiapas, Tabasco, Campeche, Yucatán and Quintana Roo. Good to go, too, are the popular art and food destinations of Oaxaca and Puebla.

Also on the safe side of the ledger: Mexico City.

As is always the case, the Mexican government termed the warning "ridiculous" and "out of proportion." Interior Minister Alejandro Poire told a press conference yesterday that the warnings "overstate or misstate the standards and security situation that exists in our country." As PolitiFact might say, "Mostly true." But it's Caracas and Venezuela that are really getting the bad rap, though the State Department doesn't even have them on the warning list at all. This stupid video could have been done for almost any city in the world. It's made by idiots for idiots, as you can see:

Posted by DownWithTyranny at 5:23 PM