Side Trip From Merída-- Beautiful Campeche... How Safe? 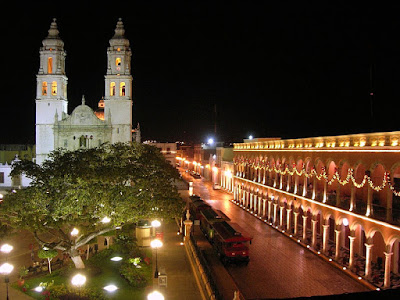 Lovely Campeche... ready for tourists to start arriving
We picked the Yucatán for our December vacation for a few reasons-- from curiosity about the Mayan culture to the warm weather; it's around 90-something by mid-day, although the early mornings and nights are cool. We rented an indoor-outdoor living house in ancient downtown Merída, the capital of the province. The house is so alluring, whole days pass when no one even thinks about unbolting the big doors and gate and going out. The house is it's own biosphere. And it feels very safe (not counting the damn mosquitos). In fact, we picked the Yucatán because of it's reputation as a safe haven in the never-ending Mexican violence maelstrom. But that was before we read about eleven decapitated bodies found just outside Merída a few years ago.

Yesterday we took an ADO bus-- a nice comfy one-- from Merída to the capital of the next province over Campeche. The city is also Campeche and it's sleepy, charming, a world heritage site and all painted and cobbled and ready to be discovered by tourists. But tourists are mostly afraid of Mexico in general so Campeche, just two and a half hours from Merída, is still sleepy. They don't care; they found oil off the coast. About 200,000 people live in the gem of a baroque colonial city, which was founded in 1540 on top of the ruins of an old Mayan city Canpech. Anyway, back to the bus. It was around $20 each way if I remember correctly and it took about 3 hours to get back because the nice highway stops every now and then for construction and you have to trundle along slowly in one lane-- harder in the dark. And police roadblocks stop you and search the vehicles, ostensibly looking for Guatemalan "illigals" who would like to get jobs in the glittery tourist mecca, Cancún. But Roland told me that Los Zetas, a paramilitary drug cartel, sometimes pull buses over and rob everyone. It made for some excitment every time we got pulled over. But nothing happened. Apparently, Los Zetas-- or some facsimile thereof-- were busy just north of where we were yesterday.

Three U.S. citizens traveling to spend the holidays with their relatives in Mexico were among those killed in a spree of shooting attacks on buses in northern Mexico, authorities from both countries said Friday.

A group of five gunmen attacked three buses in Mexico's Gulf coast state of Veracruz on Thursday, killing a total of seven passengers in what authorities said appeared to be a violent robbery spree.

...Rocha said the other bus passengers killed in the attacks were a young Mexican couple, who left behind a three-month-old baby boy, who survived the attack. A bus driver was also killed.

Five gunmen who allegedly carried out the attacks were later killed by soldiers.
Earlier in their spree, the gunmen shot to death three people and killed a fourth with grenade in the nearby town of El Higo, Veracruz.

On Thursday, the U.S. Consulate General in Matamoros, a Mexican border city north of where the attacks occurred, said in a statement that "several vehicles," including the buses, were attacked, but did not specify what the other vehicles were.

The consulate urged Americans to "exercise caution" when traveling in Veracruz, and "avoid intercity road travel at night."

On the other hand, Merída is nicknamed the city of peace, the real estate market is booming, and the food is yummy, ... but I feel like I should report on that next time.
Posted by DownWithTyranny at 7:29 PM