Ever Wonder What Medical Doctors Have To Say About Airport X-Ray Body Scanners? 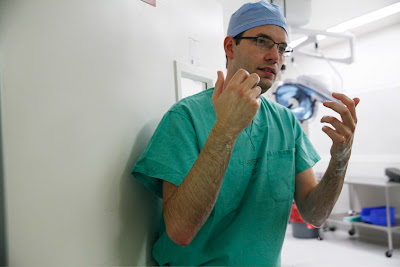 Dr. Lee Rogers is the Simi Valley surgeon running for the L.A.-area House seat which GOP fossil Buck McKeon is still clinging to. Although his campaign has focused like a laser beam on the economy, jobs and housing, it's always fascinating when he gets into topics that sit at the intersection of politics and medicine. This week his campaign called for a ban on airport body scans.

"Currently, there are about 250 body scanners that use X-rays placed in American airports by the Transportation Security Administration which have screened millions of passengers. Last year, a report by the Inter-Agency Committee on Radiation Safety, which includes the European Commission, the International Atomic Energy Agency, the Nuclear Energy Agency, and the World Health Organization, concluded that pregnant women and children should not be subject to the scanning, even though the radiation dose from body scanners is small. The Committee also stated that governments must justify the additional risk posed to passengers and should consider other technologies to achieve the same end without the use of radiation. Recently, the European Commission banned the use of X-ray body scanners in all European Union airports, citing the health and safety concerns.”

“The TSA’s use of these devises violates an important principle in radiation safety: humans should not be radiated unless there is some possible medical benefit. The devices used for security screening are not subject to FDA regulations for safety, unlike X-ray machines in a doctor’s office. Additionally, TSA officers are prohibited from wearing radiation dosimeter badges, as worn by healthcare workers to track their radiation exposure.”

“It is obvious that the use of this risky X-ray technology is the result of the culture in Washington. The manufacturer of the X-ray device is a California company called Rapiscan Systems which has more than tripled their lobbying cash in the past 5 years. The health and well being of our citizens should not be for sale.”

“As Congressman, I would work to stop the use of radiating devices for human screening that serve no medical benefit and I call on others in Congress to do the same. I would ensure that any future research on X-ray screening devices for humans meets the same ethical and safety standards that are required of medical devices emitting radiation. I would also fight to allow workers who operate X-ray machinery for baggage screening to wear radiation detector badges for their safety.”