Danger Lurks For Airline Passengers-- Germs Are Out To Get You 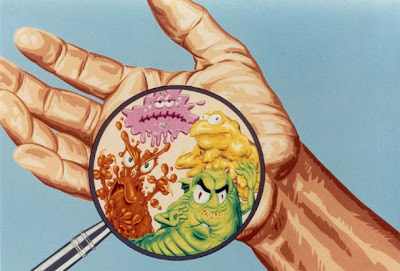 Last week Lee Rogers, a Los Angeles-based physician running for Congress, explained why he would work to ban airport x-ray body scanners. The health concerns are legitimate and powerful and the risks are imposed on us by government. There's another more immediate health risk involved with flying and this one isn't imposed by government. Today's Wall Street Journal runs through the viruses and bacteria that wait in prey for airline passengers, especially at this time of the year. And all government has done are make some toothless recommendations to the airlines-- recommendations the bottom-line oriented airlines routinely ignore.

Air travelers suffer higher rates of disease infection, research has shown. One study pegged the increased risk for catching a cold as high as 20%. And the holidays are a particularly infectious time of year, with planes packed full of families with all their presents--and all those germs.

Air that is recirculated throughout the cabin is most often blamed. But studies have shown that high-efficiency particulate air (HEPA) filters on most jets today can capture 99.97% of bacterial and virus-carrying particles. That said, when air circulation is shut down, which sometimes happens during long waits on the ground or for short periods when passengers are boarding or exiting, infections can spread like wildfire.

One well-known study in 1979 found that when a plane sat three hours with its engines off and no air circulating, 72% of the 54 people on board got sick within two days. The flu strain they had was traced to one passenger. For that reason, the Federal Aviation Administration issued an advisory in 2003 to airlines saying that passengers should be removed from planes within 30 minutes if there's no air circulation, but compliance isn't mandatory.

Much of the danger comes from the mouths, noses and hands of passengers sitting nearby. The hot zone for exposure is generally two seats beside, in front of and behind you, according to a study in July in the journal Emerging Infectious Diseases, published by the U.S. Centers for Disease Control and Prevention.

A number of factors increase the odds of bringing home a souvenir cough and runny nose. For one, the environment at 30,000 feet enables easier spread of disease. Air in airplanes is extremely dry, and viruses tend to thrive in low-humidity conditions. When mucous membranes dry out, they are far less effective at blocking infection. High altitudes can tire the body, and fatigue plays a role in making people more susceptible to catching colds, too.

Also, viruses and bacteria can live for hours on some surfaces--some viral particles have been found to be active up to a day in certain places. Tray tables can be contaminated, and seat-back pockets, which get stuffed with used tissues, soiled napkins and trash, can be particularly skuzzy. It's also difficult to know what germs are lurking in an airline's pillows and blankets.

Research has shown how easily disease can spread. Tracing influenza transmission on long-haul flights in 2009 with passengers infected with the H1N1 flu strain, Australian researchers found that 2% passengers had the disease during the flight and 5% came down within a week after landing. Coach-cabin passengers were at a 3.6% increased risk of contracting H1N1 if they sat within two rows of someone who had symptoms in-flight. That increased risk for post-flight disease doubled to 7.7% for passengers seated in a two-seat hot zone.

...[S]ome basic precautions passengers can take to keep coughs away.

Hydrate. Drinking water and keeping nasal passages moist with a saline spray can reduce your risk of infection.

Clean your hands frequently with an alcohol-based hand sanitizer. We often infect ourselves, touching mouth, nose or eyes with our own hands that have picked up something.

Use a disinfecting wipe to clean off tray tables before using.

Open your air vent, and aim it so it passes just in front of your face. Filtered airplane air can help direct airborne contagions away from you.

Change seats if you end up near a cougher, sneezer or someone who looks feverish. That may not be possible on very full flights, but worth a try. One sneeze can produce up to 30,000 droplets that can be propelled as far as six feet.

Raise concerns with the crew if air circulation is shut off for an extended period.

Avoid airline pillows and blankets (if you find them).

...You think the plane is bad? Security checkpoints harbor a host of hazards as well, researchers say.

People get bunched up in lines, where there is plenty of coughing and sneezing. Shoes are removed and placed with other belongings into plastic security bins, which typically don't get cleaned after they go through the scanner.

A National Academy of Sciences panel is six months into a two-year study that is taking samples at airport areas to try to pinpoint opportunities for infection.

With limited resources, airports and airlines have asked researchers to help figure out where best to target prevention, said Dr. Mark Gendreau of Boston's Lahey Clinic Medical Center who is on the panel.

Check-in kiosks and baggage areas are other prime suspects in addition to security lines, he said.

Posted by DownWithTyranny at 9:06 AM

good blog thanks for sharing with us