Starting The Ball Rolling Towards A Trip To Ethiopia 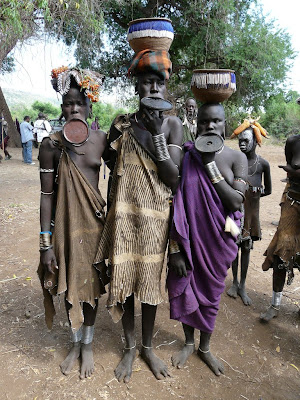 Three ladies from the Mursi tribe

I started my adventure traveling before I understood anything about sex. In fact, the first time I ever even had sex was when an older woman-- she was 17 I think, or almost 17-- seduced me in the back of a Greyhound station in Jacksonville, Florida. I had virtually no idea what was going on and mostly all I remember were the big black rubber tires we were surrounded by. I was on my way to visit my grandparents for Pessach in Miami Beach. Later being physically attracted to a people helped determine where I wanted to visit; I've had wide tastes and see beauty in almost every kind of people. But that was a long time ago and these days I'm much more likely to pick a destination because I like the cuisine. Really.

Roland, who is really eager to go to Ethiopia (not to mention Eritrea and Somalia; he's insane)-- and knows my proclivities-- has been trying to talk me into liking Ethiopian food for just around a decade now! He keeps claiming it's "one of the great cuisines of the world." L.A. has a Little Ethiopia about half and hour from my house. There are over a dozen well-regarded Ethiopian restaurants within 2 blocks of each other. The basic building block of the cuisine is injera, a kind of sour bread that he just loves and I never really took to-- until this year. The meal consists of the injera and some wats or stews. Just when I was starting to get used to the taste of the injera I found out it's made of fermented teff, which is totally in synch with my health regime. Teff is a kind of grass, but not wheat-- which I avoid-- and it's not gluten. It's more like quinoa or millet and it's a good source of fiber, protein, iron and calcium-- very healthy.

Anyway, Roland's in Maine for a few weeks and yesterday I went to Little Ethiopia for lunch. My favorite restaurant there-- by far-- is Rahel, which is the only pure vegan place. The others-- Messob, Rosalind's, Nyala, Merkato, etc all serve vegetarian dishes, which are common in Ethiopia, but Rahel makes an art of it. On Saturday's lunch is an all-you-can-eat buffet for something like $12. There are a dozen dishes, all delicious and healthful. So Ethiopia passes the food test and we're in the early stages of planning a trip there. One of my neighbors has an orphanage in Lalibela.

In his enthusiasm, Roland has been feeding me this line about how it doesn't only have "one of the world's great cuisines" but that it's also the "land of eternal spring." I decided to double check, knowing how completely unreliable he is when he's made up his mind. He's been pushing for next June.

When to go to Ethiopia?

The main rainy season is June to end of September. Don't go then unless it is the ONLY period you can take a holiday. it rains pretty well every day-- some is drizzle but much is heavy tropical rain. Things get very muddy. IF you can only go in this period of the Big Rains try to spend some time in lower altitude areas like the Rift Valley Lakes zone, where it will be warmer and a bit less wet...

Best time to visit is mid October to mid March-- the dry season.


Since this coming December we're set on the Yucatan, it'll have to be the following Christmas. Long way... But here's a video I found with an overview of the capital, Addis Ababa, a city with 4 million people that everyone tells me to have a quick look around and then out into the country.

Posted by DownWithTyranny at 8:10 AM