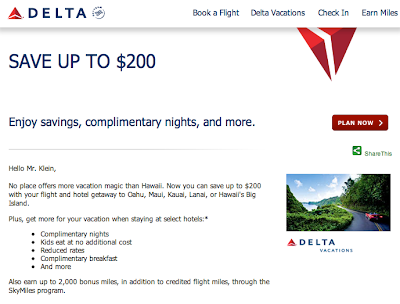 Oh boy... 2,000 extra bonus points from Delta, the airline that doesn't let their customers use frequent flier miles! The above ad came as an e-mail yesterday, the same day Delta threatened to follow Blackwater, Halliburton and other extreme right-wing companies out of the U.S. Richard Anderson, who's personally donated tens of thousands of dollars to right-wing politicians-- including heavy contributions to Boehner, McConnell, Romney, McCain and deranged nihilistic teabaggers like Tim Walberg (R-MI), Paul Gosar (R-AZ), John Bircher Paul Broun (R-GA) and Taliban Dan Webster (R-FL)-- told a crackpot Fox propagandist, Neil Cavuto, that he might pick up his toys (Delta) and leave Atlanta (and the U.S.) if he isn't free to keep up his anti-union policies.

Anderson is grumpy because of a change in labor policy that makes it easier for union organizers to win elections.

To understand what's changed you need to know that in the past, when employees were presented with the option of joining a union it wasn't just the "yes" votes and the "no" votes that were counted. The number of people who did not vote was tallied too and those non-votes were considered "no" votes. The philosophy behind this somewhat odd practice is to make sure that a majority of all employees vote for the change, giving a voice even to those workers who don't want one enough to actually cast a vote.

...Certainly Delta is not alone in opposing anything that will increase the likelihood of unionizing. Fed Ex and UPS are also said to be lobbying hard to overturn the new National Mediation Board policy on union elections.

But it's only Delta's top dog who decided to go on national television and threaten the nation with its exodus.

"Capital is mobile" Anderson said in a not-at-all-veiled threat that if Congress comes down on the wrong side of the unionization policy, companies will pack up and move, repeating the threat three times.

Where might unhappy companies like his go you might ask? Anderson cites appreciatively the locomotive-like economies in Brazil and China. Now if Delta is planning to pull up stakes from Atlanta, its home for the last 70 years and carry its kit and kaboodle down to Rio or Shanghai that's news! Unfortunately, and Mr. Anderson surely knows this, a raft of restrictions would have to be changed for a US airline to makes its headquarters anywhere outside of the USA.


Delta's employees are generally so dispirited that the company's service is miserable and Delta is widely considered the worst airline in America. Dozens of groups are boycotting it for dozens of different reasons. Survey after survey show that they rank at the bottom of the heap in everything travelers care about-- and since Anderson took over and made Delta a vehicle for his neo-fascist political agenda, the airline has gotten noticeably worse.
Posted by DownWithTyranny at 4:00 PM