Most Peaceful, Least Peaceful Countries-- But Are They Safe For Tourists?

Different kinds of danger in different societies
We planned our trip to Nepal and Tibet all year. We've been to Nepal a few times before-- starting in 1971 for me-- and there's no need to make an extraordinary preparations for a trip there. Easy as pie these days, especially for a place so totally exotic. But Tibet is another story. You can't just jump on a plane and fly to Lhasa and walk around and take a look. Tibet is chafing under the control of China and China makes it very difficult to get in and puts extremely tight controls on anyone who does go. It's complicated and expensive and fraught with rules and regulations. Two weeks ago, China announced that no foreigners would be allowed into Tibet during late June and early July, just when we were going to be there. We had to cancel all of our hotel reservations and our serpentine, costly permitting procedures. And our airline tickets.

Only Air China flies from Nepal to Katmandu. They don't like refunding tickets. It took some maneuvering to get them to agree... I think. I think? Well, they say they'll return most of the money. We'll see if they do.

Meanwhile, we're extending our time in monsoon-ridden Nepal. That may be a mistake. Aside from daily torrential rains, it looks like there might be a civil war brewing again. The Maoists against the Communists. Everyday Roland reads the Indian newspapers to gage how safe it is to fly into Kathmandu-- above and beyond his intelligence that there is no functioning radar system in the country's only international airport, Tribhuvan. Checking for political peace is relatively new thing for American tourists who want to have a nice vacation. It never used to bother us much. Now we're always second-guessing Mexico, the Middle East, Morocco, even... Arizona.

Maybe the 2011 Global Peace Index, which was released yesterday, can be helpful. The key findings were that:

• The world is less peaceful for the third straight year

• Due to an increased threat of terrorist attacks in 29 nations

• A greater likelihood of violent demonstrations in 33 countries

• Iceland bounces back from economic woes to top ranking

According to the report, Iceland, New Zealand and Japan are the three most peaceful countries-- and in that order. I remember Iceland being filled with rowdy drunks when I was there... but that was in 1969 and maybe they're quieter now. All the Scandinavian countries are filled with drunks and they're all rated among the 10 most peaceful on earth. Europe in general is rated as the most peaceful place and sub-Sarahan Africa as the least peaceful. Somalia's the worst of all, with Sudan close on its tail. The U.S. improved from 85th most peaceful to 82nd most peaceful. Canada, by way of comparison is 8th most peaceful. I think it's that gun thing in places like Arizona and Texas that screws up the U.S. ranking.

If the world had been 25% more peaceful over the past year the global economy would have reaped an additional economic benefit of just over US$2 trillion. This amount would pay for the 2% of global GDP per annum investment estimated by the Stern Review to avoid the worst effects of climate change, cover the cost of achieving the Millennium Development Goals, eliminate the public debt of Greece, Portugal and Ireland, and address the one-off rebuilding costs of the most expensive natural disaster in history-- the 2011 Japanese earthquake and tsunami.

Nepal's #95 on the list-- unless your a monarch, in which case, you could easily be shot. Here's the whole list, from best to worst and these are the 15 least peaceful places. I'd avoid most of them, although I keep wanting to visit Moscow and St Petersburg. I think Colombia is on the list mostly because they shoot union members there. It just beats out... Yemen and Lebanon!

At this time, a U.S. government-facilitated evacuation will not take place because commercial travel options remain.

U.S. citizens choosing to stay in Yemen are advised to limit nonessential travel and enroll their stay in the country through the Smart Traveller Enrollment Program (STEP). Registrants will be prompted to provide their current contact information and next of kin or emergency contact information.

The U.S. also ordered all non-essential American diplomats and all diplomats' families out of the country immediately. 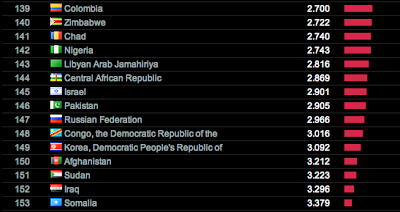 Posted by DownWithTyranny at 10:34 AM

I guess you should always get all the info you can before visiting a foreign country.

One of the problems with these rankings is the metrics and weightings used. I can't see the US as being 88th in the world when we are engaged in, initiating or supporting wars throughout the world. With about 5% of the population we are providing about 50% of the world's military material. We are killing more people in other nations than anyone else, displacing more, and destroying more of the civilian structures and cultures.

The idea of the most/least peceful country doesn't mean much really. Peace is NOT the absence of physical war. we do know this, don't we?

If you are peaceful inside, it doesn't matter really where you live. You can even live in the least peaceful country for peace has little or nothing to do with what is happening around you.