Another Trip To Sri Lanka? Or Is It Too Soon? 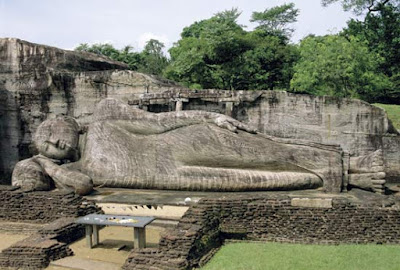 Polonnaruwa was pretty cool
I discovered Sri Lanka, still Ceylon then, in 1970 when I drove there from England. (There was a funky ferry from Rameswaram in the south of India back in those days.) I loved Ceylon so much back in those days and talked about it in such superlative terms that in 1997, during a quasi-lull in the civil war, I went back for a month with two of friends, Roland and Steve. Well, not exactly a month. The quasi-lull in the fighting wasn't quasi enough. On top of that, all the fighting had taken a serious toll on everything wonderful the country had to offer, even in the areas where there had been no sustained fighting. So Roland and Steve ganged up on me in Negombo, one of the most boring places on the island and persuaded me to cut the Sri Lanka trip short and head off to Thailand.

Now the war is over and the NY Times is calling Sri Lanka its #1 travel destination for the year-- ahead of Patagonia, Seoul, Mysore, Copenhagen, Koh Kood, Damascus, Cesme, Antarctica, Leipzig and... L.A. And guess where Roland wants to go! He's now claiming he has nothing but amazing memories of Sri Lanka and wants to see it again. I suspect its because we went to Artesia to get Indian food a couple weeks ago and he bought a book on Ayurvedic medicine and wants to go to some Ayurvedic shop we stopped by in Nuwara Eliya (although he says there are some luxurious Ayurvedic resorts near Colombo and in Beruwala and Weligama. In fact, they're sprouting up all over the country now.

Now that the war is officially over-- although, apparently some of the Tamil rebels haven't gotten the message, at least not as of last Friday-- tourism is taking off again and hotels are being built everywhere. I hope they're fixing up the infrastructure before they start selling the place to Americans. I have a feeling it is still not quite ready for prime time for non-adventure tourists. In London, today's Sunday Times explores some of the pitfalls of Lankan tourism from the perspective of a Lankan reporter.

With additional numbers expected to be promoted most popular tourism sites visited by both local and foreign tourists are going to get overcrowded. If such sites are not improved on a proper plan and good management with priority being given to sufficient parking and traffic arrangements, good quality restaurants and clean toilet facilities, visitor safety etc. the value to the visitors will not remain for long. This is most relevant to nature reserves and wildlife parks that are extremely vulnerable to pollution and overcrowding. Visiting Yala national park on a long weekend is similar to going to a popular motor-cross event. The number of vehicles entering the park is an absolute harassment to the animals and a speedy way to endanger them to extinction.

Noisy vehicles and obviously high levels of carbon emission can do much damage to the wildlife in a short span of time. Many wild life enthusiasts have highlighted this matter through the media but to no avail. The opening of the Wilpattu National Park will certainly reduce the pressure on the Yala reserve in this respect but stringent controls must be worked out to allow only tolerable numbers to enter national parks, ideally with an advance booking system for peak periods. With all relevant government agencies being wisely brought within one ministry, the processes to deal with such matters is easier than ever before. It is the fundamental right not only of our future generations to see and enjoy nature in its true form, but also of the wildlife itself for its very sustainability.

These remain as byproducts of tourism especially of mass tourism in certain destinations around the world. These vices have reached dangerous levels in some Asian destinations and are now seen as irreversible, by being entwined in the social lives of local communities. In reality Sri Lanka even at the moment has an issue at hand in this regard. The irresistible love for Dollars, Sterling Pounds and Euros cannot ignore societal damage that can permanently harm civic life and the cultural values of this country. It is critical therefore that there is a broad understanding of these problems and their impacts on Sri Lankan society. This understanding and initiative to prevent it should not only come from NGOs and resource tight government agencies. Since it is virtually a direct impact of the country’s leisure industry, it is imperative that the tourism sector take responsibility and preventative action on these fronts. Damage control should not come only as a CSR activity of a few but as proactive approach from all responsible.

A destination must not only be peaceful but also safe for a visitor. From early times of tourism in the island certain resorts had tourist police units. To some extent they were effective though not necessarily to the level that they should have been. Three years ago, a Tourist Police section was introduced that set up office at No 78 Steuart Place, Colombo 3, where Sri Lanka Tourism has its offices. This was to look into the safety of tourists. With the expected increase in visitor arrivals, most resorts and tourist sites will require an effective force under this administration to ensure visitor safety.

There have been numerous threats in the past on tourists by local thugs who even have manhandled tourists. Most such thugs are closely linked to local politicians. Hence the police have found that their hands are tied in most cases. A few cases of rape of female tourists also had taken place in the past in certain beach resorts. Theft on the beach and snatch thieving at other places are not uncommon and tourists leave our shores with bitter memories, never to return.

If you do decide to go before we go back and I get to write a big thing about hotels and restaurants, there was one hotel we stumbled upon in the middle of nowhere that I totally recommend, the Kandalama in Dambulla. It was down a dirt road far from anything but... WOW! What an amazing find! It was built into the side of a mountain and overlooked a gigantic lake. We would be swimming in this amazing infinity pool and watching the elephants bathing in the lake below us. The place defined serenity and if we do go back to Sri Lanka I want to spend at leats a week at this place.

Posted by DownWithTyranny at 3:30 PM