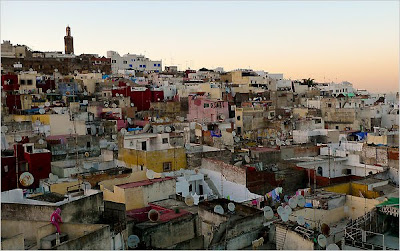 There are many timeless qualities about Morocco, timeless and charming, but it's a very different place now than it was the first time I went in the summer of 1969. Right now I'm putting the finishing touches on a trip there-- there have been a dozen since the first one-- and this time it'll basically just be to rent a house in Marrakesh's old city for a month... take some day trips to Essaouira, west on the sea and down over the High Atlas to Taroundant, two of my favorite smaller cities in Morocco. We're flying directly into Marrakech from London, something I don't think was possible in the '60s. I recall always either driving there or taking public transportation from either Casablanca, where Mococco's big international airport is, or from Fes.

The first time I went, though, it was in my VW van and we took a ferry from Algeciras in the south of Spain, a wonderful way to arrive in Morocco for the first time and gradually feel everything change-- the sights, sounds, smells-- between Europe and Africa. I had an idea that Tangier was like the Times Square of Morocco, a place to be avoided until you were hip to the hustles of the country. We took the boat across from Algeciras to Ceuta, still part of Spain, and then drove to Tétouan and the southeast to Rabat, missing Tangier entirely. After spending all of July traveling around Morocco we felt savvy enough to exit via Tangier. It wasn't for years until I really started liking the city and only then because I had a friend who lived there and who was able to introduce me to its secrets.

This weekend, the NY Times has a travel guide to getting lost in Tangier, Tangier in the high summer, in fact, something I've long learned to avoid. I love the "getting lost in" concept though.


Tangier seemed a good starting point. Not only does it have a magnificent medina that holds out the promise of geographical bafflement, but it is itself also lost in time and space. Since antiquity, Tangier-- at the mouth of the Mediterranean, roughly nine miles from Spain-- has been a gray zone between Africa and Europe, never quite belonging fully to one or the other, though controlled, for greater or lesser spells, by Carthaginian, Roman, British, Spanish, Portuguese, French and Arab forces.

Today, Tangier is known in America thanks in no small part to Paul Bowles, the novelist and composer who settled there in 1947, and the Beat Generation who followed him in search of cheap, exotic living (and, as William S. Burroughs said, “for the boys and the hashish”). For a few decades, Tangier was a playground for the wealthy and the literary-minded, but by the 1980s it was crumbling and dismal. When I told a friend who had visited in 1998 that I would be there more than a week, he was appalled.


Although the first time I went to Morocco I was hanging out with Jimi Hendrix, down south in Essaouira, the Rolling Stones-- and especially Brian Jones-- went there earlier than I did and got me interested in the place. Ironically it was at my friend Absalam's house in Tangier that the Stones recorded part of Steel Wheels in 1989. Good documentary from a Stones' trips to Morocco:

Tip: if you decide to go, reading Paul Bowles' The Sheltering Sky is more important than any guide book
Posted by DownWithTyranny at 10:21 PM