Albania-- A Guest Post From Evil Jesus, The Man Who Brought The Internet 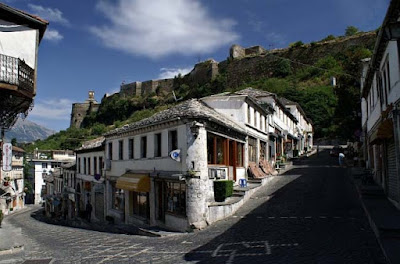 My trip overland from Europe to India and back took a couple years. I made one phone call-- from Agra when I found a free phone I could use-- and sent a few letters home and got a few via poste restante in places like Istanbul, Tehran, Kabul and Delhi. I was a lot more connected than the Pilgrims, These days, whenever I go traveling, I need to make a decision about whether or not to take a computer. Do I want the extra weight? Will there be opportunities to find internet connectivity? Is it safe to bring it. Ever since I got a Apple MacBook Air

most of the excuses for not bringing one have disappeared. It weighs about as much as a double issue magazine and fits into anything. I figured-- correctly-- that there would be no way to connect in Dogon Country and I wound up not bringing it to Mali. But that was probably my last-ever computerless trip abroad.

For my winter trip I spent some time searching online and eventually rented a flat in Rome. The first thing I always look for is to make sure the place has wireless connectivity. Just about every rental in Rome I looked at did. However, for my side-trip we're spending some time in Albania, a place not nearly as with it and connected. We're staying at a real hotel in Tirana but in Berati, Butrint, Gjirokastra and Fieri... we'll be staying at what amounts to bed-and-breakfasts and my first concern was that we find indoor plumbing.

In 1995 Wired did a piece called Evil Jesus Wires Albania, the Land Technology Forgot. They make the point that "isolated by communism's arguably most paranoid and hellish dictatorship for 44 years, Albania still has a bit of catching up to do with the rest of the world. Though only 60 miles across the Adriatic Sea from the boot heel of Italy, it is decades away from modern Europe. Until three years ago, there were no private vehicles in the country of 3.3 million inhabitants. (Now there are about 200,000, all clunkers, and it's no coincidence everyone drives like they just learned how.) Fewer than 2 people in 100 have telephones."

This year, however, if Bill [Eldridge] can come through, the country is going to have one much stronger link to the modern world: the Internet. On a mission from his own private god, and with funding from the Open Society Institute and the United States Information Service, Bill is working to hot-wire Albania or bust.

Sporting a shaven head, a pointy red beard, and a glint in his eye he calls the "Evil Jesus" look, this 34-year-old Alabaman ex-punk street musician might seem like an odd choice for wiring a nation to the greater world of electronic communication. But Bill is probably as capable as anyone. With degrees in electrical engineering, computer science, and (for good measure) Spanish literature, plus having worked as a network administrator in St. Louis and later at the University of California, Los Angeles (after crooning in the streets in Barcelona and New Orleans got tired), he's got the skills required.

Evil Jesus, is an internet pal of mine and he wrote this little essay for us:

15 year ago I went to Macedonia to help set up internet there, and had this naive thought, "it's so small, why not set up Albania with internet too?"

More interesting is just how easy going the country was despite emerging from years of cruelty-- very Mediterranean along with Balkan, just an enchanting place. If you do get time, drives down to the south of the country are amazing, all the way to the sea view looking off to Greek islands (while considering how many Albanians want to swim the distance), a huge plate in the side of a mountain where Soviets hid their subs James Bond style, and a few beautiful well-preserved cities (UNESCO). Then the small things, lots of the best olive oil for nothing, bought in whatever bottles the storekeep found. Haven't been back since 1995, though I know the Turkish head of one of the telecoms there. (In 1995 there were 90,000 phones in all the country, 1/3 of which would go out every time it rained.)

Just met someone from the IARU who'd been doing radio stuff even earlier there, 1989. At night there were no street lights, big potholes in the road, possible to fall in and really hurt yourself. My last night there got in a yelling match with 2 guys who just stood in the road while we almost smashed into them with our bikes. While I scared away one holding up my bike, the other one got a good punch into my jaw as I turned around, explosion of blood and stars.

1995, people had just gotten their drivers licenses, chaos on the road as thousands of new drivers took their acquired-from-who-knows-where cars on the road, remember two guys who almost hit each other, getting out of their cars looking mad, and then giving each other a big hug, presumably while asking how the grandmother's doing, etc. Amazed when I hopped on a train from Tirana to the port city, handed someone $3 not having any Albanian money, later found out it cost probably 30 cents. Stayed in this old warped floor 2-room "villa" with a wonderful garden, right in the middle of town, cats sleeping on the walls, outside trucks and cars would pull up to the neighboring apartment building and honk their horns, no working doorbells. Found out later the owner or his father, forget which, had translated Beaudelaire into Albanian. Besides the Albanian language being descended from pre-Greek times, the Illyrians, it's often hard to imagine that Albania was also part of the Adriatic trade and the Roman trade routes through the Balkans, that people in the 1920's were an extension of Italian culture, that they often spoke Italian quite well and would go across the sea to study.

Shortly before I left, I flew back in from Prague, spoke my broken but earnest Albanian, felt like a prodigal son, the smiles and warmth as I moved through the airport, the feeling of being "home," which for a traveler is a rather hard-to-capture term-- the most obscure places can feel like home at the right time. Reminds me of Dylan, "everyone was there to greet me when I stepped inside." Remember my negotiations with Albanian Telecom, came to an agreement after months of negotiations, having our celebration coffee for how we would get use of 64 whole kilobits per second of the monopoly's sea cable to Italy to bring public internet to Albania, or at least a fairly open and balanced subset of government, NGO's, universities... And then the head of telecom looked at me and queried, "but this is just for the school, right? No one else will be using it...." Ah yes, the private monopoly internet.

Fortunately had a few other irons in the fire, otherwise would have seen everything smashed to pieces. Towards the last weeks, I had no time, everything on a tight schedule before I left, would show up to install an antenna and the guy with the key wasn't there. In normal society, that meant, "wait till tomorrow." Instead I'd find some way to run a cable from roof reaching through a broken window with a broom, crawling around rooftops trying not to break through or fall off.

Biking around town each day, Soros building nearby a Microsoft training center where 20-25 amazingly beautiful girls always seemed to be outside on smoke break. A huge pyramid in the center of town housing USIS and just begging kids to climb/skate down. And then we'd hit these ancient places, 2000 year old ruins, huge walls, reminding me of the relatively undocumented civilization that'd been trudging along well before the Romans, long before the Rome-Constantinople split, and still it's hard to remember more than 3 stories about Albania over the last 50 years.

Had spent the last two weeks out of our nice but rickety tiny villa in the center and instead in a rundown apartment with no water on the far edge of town. Woke up the next morning, got a cart to take us to the airport, left behind probably the nicest capsule of time in my life. Like living in Prague in 1990, I'm sure so much has changed in Albania since. Maybe they've even fixed the torturous road from Macedonia over the mountains that in a bus feels like someone kicking you in the kidneys, 20 hours for 180 km from Skopje. Maybe the Macedonians have stopped making Albanians walk through disinfectant to cross the border.

That I doubt.
Posted by DownWithTyranny at 10:54 AM

Moderate posting....Need to be more informative.....
I hope this blog will do better in next time.

Pretty graceless comment before mine - ah well can't please 'em all. What I wish is that the bog had a search function - I want to look up your experiences of Cambodia, but how?

Igor, you'll have to master the art of time travel and set it for an as yet undetermined future when I visit Cambodia for the first time.