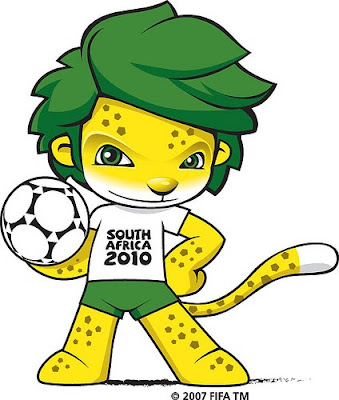 Meet Zakumi, the official mascot for the 2010 World Cup
I'm planning a trip to Rio for the spring-- way before the Olympics make it unbearable. Long before the Rio Olympics, though, people are buying up every hotel room anywhere near Port Elizabeth. Port who? Next summer, June 11- July 11 the 19th World Cup will take place in South Africa-- in 9 cities, including the brand new Nelson Mandella Stadium in Port Elizabeth. The other cities are Johannesburg, Durban, Cape Town, Pretoria, Bloemfonterin, Pietersburg, Nelspruit and Rustenburg. (Saturday the U.S. guaranteed its participation by beating Honduras.)

Robert Tuchman, probably the foremost expert on worldwide sports travel, and author of The 100 Sporting Events You Must See Live

, agreed to give us a bird's eye advance look at the 2010 World Cup. His book, which covers everything from the Super Bowl, Masters, Calgary Stampede, Army v Navy Game, Wimbelon, Stanley Cup and Rose Bowl to the Indy 500, Running of the Bulls, Iditarod and the Nathan's Hot Dog Easting Contest, offers plenty of tips and advice on how to access the best tickets, hotel accommodations, private event passes as well as all of the ins and outs of the selected happenings surrounding each event. Here's his report on next year's World Cup:

Every four years near the end of June and beginning of July thousands of countries around the world shut down to watch and tune into the World Cup. Millions fill into the host country’s stadiums, and billions watch from home on their televisions. If you are not tuned into the World Cup you are missing out on one of the biggest sporting events of the given year. But nothing can compare to the enthusiasm from the fans, patriotism and pride for their country, and the passion that you can see in their eyes while watching and being instilled in a game. 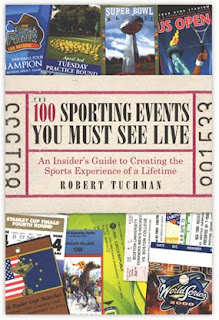 In 2006, I was lucky enough to experience the World Cup in host country Germany. I witnessed hundreds of thousands of people who had traveled from all over the world to experience this great sporting event. Passion could be seen in their eyes and heard through their cheers. I have seen many live sports events in my time, but few have been able to match the type of raw energy and enthusiasm that was evident that summer in Europe. The actual matches were only part of the experience. The pride that countrymen felt toward their team, the parties and revelry in the streets in celebrating a victory, and the liveliness and enthusiasm provided once-in-a-lifetime spectacle for me. It was this sporting event that motivated me to write a book called The 100 Sporting Events You Must See Live An Insider’s Guide to Creating the Sports Experience of a Lifetime.

This summer, South Africa is the host nation where soccer isn’t just a sport but for thousands of people a way of life, and something that is either played or consumed on a daily basis. So far 19 teams have qualified for the prestigious tournament including big name countries like Spain, Italy, Germany, Brazil and recently the United States. The biggest stadium and venue is Soccer City in Johannesburg, the stadium holds 94,700 fans. The second largest is in Durban holding 70,000 fans. The host country has been working hard on preparations for the upcoming event building five new stadiums, three new match stadiums and two practice facilities. 200 teams have entered the World Cup but only 31 countries will qualify and compete for the prestigious title. The drama, heartache, enthusiasm, and passion will unfold this summer in South Africa. If you haven’t tuned into to the World Cup before the time is now, experience something that motivated me to write a book. Experience more than a sport, but a way of life for most of the world.
Posted by DownWithTyranny at 3:36 PM