The World's Most Dangerous Countries 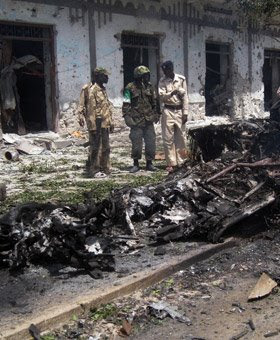 Not much tourism going on in Somalia
I'm putting the finishing touches on my return to Bali. I booked a flight from L.A. to Bangkok and then a hotel for one night in Bangkok, followed by a flight the next day to Bali, where I booked a beautiful villa on the outskirts of Ubud, far from the horrific tourist beaches down south. Last time I went to Bali-- about 3 years ago-- people were still frightened because of the 2005 suicide bombings in Jimbaran and Kuta, two congested and commercialized tourist areas.

I avoid places like Jimbaran and Kuta not because of terrorism but because they're filled with noisy partying tourists, mostly from Australia and Singapore but from everywhere. Bali has so much to offer and the southern tourist ghetto is a blight on everything good about the place. On the other hand, there are places I would avoid because of political danger. And last month's Forbes had a handy guide to the worst of the lot.

You'd probably guess that the worst of the lot, even beyond the tourist-unfriendly piracy, is Somalia. Most of the most dangerous states on earth are either Muslim or African. Somalia is both-- as well as a desperately poor failed state. The others in the top three are Afghanistan (one of the places I visited, in less unsettled times-- 1969 and 1972-- that I liked most) and Iraq. Also way up there are the Congo, Sudan, Pakistan, Yemen, Georgia (in the Caucasus, not the one in the U.S.), Nigeria, Algeria, Haiti, Ivory Coast, Sri Lanka (another place I've loved visiting, both before and even during the civil war), Palestine, Zimbabwe. And then there's parts of Mexico, although not the parts that tourists normally go to visit (unless you want to count swine flu as a danger). I don't usually care what officials say about what's too dangerous to visit and what isn't. They tend to be overly cautious. But not always. The U.S. State Dept. advises against Timbuktu but they're wrong about it. It's very safe. If, on the other hand you're reading about civil war and terrorism in the newspapers, it's better to stay away.


UPDATE: I'd Stay Away From Pakistan

Turns out Dick Cheney didn't order the hit on Benazir Bhutto after all. Still, you have to be a real pollyanna to go anywhere near Pakistan these days.
Posted by DownWithTyranny at 4:35 PM