BLOGGIN' FROM MARRAKESH... SORT OF 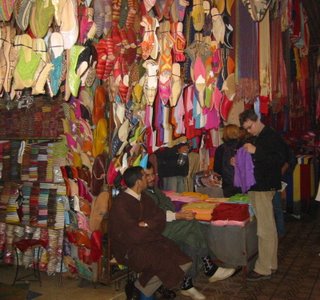 I just got a letter from an old friend, Dave, who is visiting Morocco with 2 other mutual friends, Jo and Cindy. It's the first time in Morocco for each of them. He wrote to me from the Riyad El Cadi, the fantastic townhouse in Marrakesh where Roland and I stayed last December. Dave said it was ok to turn his letter into a blog.

I'm writing this to you under the lemon trees in the central courtyard of the riyad el cadi.  As I type, the electrifying moan of the afternoon call to prayer is starting to swell across the medina. We arrived last night after a flight from Amsterdam. I am staying in your room, the Piscine, and Josephine and Cindy are in the Maison Bleu.

Thanks so much for recommending this place. It's absolutely lovely. And they light up when we mention "Howie".

Here's a little excerpt from of my diary. The longer entry spent a lot of time describing our arrival on the edge of the Jamaa El Fna and the walk to the Riyad -- a scene you know well enough, so I'll spare you that bit and cut to early this morning...

As I have for the last week, I slept like an old dog. Me, who's used to three or four hours at a time, sleeping for six and seven. Very odd. What's surprising here is that you're in the middle of this incredibly dense neighborhood that stretches out at least a couple of miles in every direction from you and at night it's just dead silent. I had a crazy dream about being caught up in some very intense religous mystery (along the lines of the Da Vinci Code I think -- although i haven't read it) chasing people through all these little corridors and stairways, being warned to stop asking questions by some people and pulled into dark doorways by others who would confide some mysterious bit of secret information. I woke up quite disoriented to the sound of the morning call to prayer at 5, followed by a really amazing concert of bird calls of every description. Needless to say, it took me a while to feel like i was really awake and really here.

At breakfast this morning a fellow named Hassan from the hotel spent about a half an hour with us talking about what we wanted to see and do, and then marking routes and destinations on the impossibly complicated map of the old city -- the Medina.  A bit later we set out on our way, deciding to go visit an antique-dealing friend of Hassan's who he said was not more than 3 minutes walk up the alley. Within a minute and a half we were totally lost. I can't really describe the scene, and I know that sooner or later you just get used to it and start to get your bearings, but at first it's just sort of mind-blowing,  Turn a corner and you're in the middle of a little vegetable market where a man is selling red onions, a woman has two little piles of apricots, a moped is honking its way through the busy crowd, an old old man is leading a donkey pulling a cart full of animal hides and then another man more or less pulls you into his doorway to show you his blanket factory. Before you know it, he's led you down a dark, dark corridor and into a ramshackle room where ten or twelve men are working on looms, weaving these incredibly vibrant colored yarns into blankets and rugs. And the guy is offering you tea and talking about America and saying "you are welcome here" and about how he'll make a special price for you. It's at once stunningly beautiful, squalid, intimidating, annoying, funny and seemingly so damned authentic that the modern cynic in you can't possibly believe that it could possibly be authentic at all. I think this is the thing that, in my first day here, has suprised me the most. You travel around a bit and you start to believe that every place is more or less the same.  London is not that different from Los Angeles... Amsterdam... Chicago...  even China which in a lot of ways really blew my mind.  What's surprising is how much alike they all seem to be. You begin to expect to be able to feel more or less at home anywhere. Then there's this place which makes you realize that the world is still a lot bigger than you are. Today, wandering through the maze of markets, it made me feel quite naive. And that, in turn, made me feel vulnerable, and for a second, a little uneasy. And then again, everyone is remarkably friendly and funny. A man in a shop asked me if Josephine and Cindy were my two wives. I laughed and he laughed and he told me I must be a Berber and that he'd give me 12,000 dirhams for the pair of them and we both laughed some more.  I guess the Berber are the butt of a lot of jokes here.  A few minutes later, in another stall, Josephine was considering buying some old tins.  She pulled me in to talk to the seller who was asking 400 dirhams and he asked me to tell him my price.  When I said she would pay 200 for them, he looked and me and said I must be Berber. I said, "Berber? Why? Because I'm cheap?" To which he replied, "Cheap!  Yes." And laughed.

Yesterday I had to abandon the girls and retreat to the Riyad after I couldn't absorb any more shopping.  A couple of hours later they returned with a tale of Josephine nearly getting into it with a passive agressive t-shirt seller who, after apparently some time spent chatting, offering tea and showing the goods, felt that her price was insulting.  He said something along the lines of "Are you a little crazy in the head?" and at some point put the shirts in a bag and threw them at her telling her, "Fine! Just take them American. Just take them for nothing."  I sort of wish I'd seen it and then again I'm really glad I wasn't there.

Today I think we're headed to some gardens and a supermarket.

Oh, and we had a wonderful dinner at El Fassia last night.

Anyway, thanks again Howie.  We feel a little like you're here with us.

UPDATE: 36 HOURS IN MARRAKESH-- TOO EXPRESS

Today's NY Times is right about one thing: Marrakesh is cool. Their vision of why... kind of superficial. Hey, but superficial people have a right to discover cool places too (and destroy them for everyone else).
Posted by DownWithTyranny at 10:51 PM