Urban Gadabout NYC: Exploring Calvary Cemetery and the L train -- plus fall schedules from the NY Transit Museum and MAS 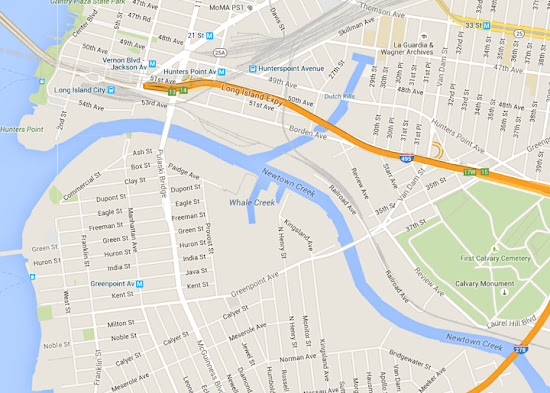 First Calvary Cemetery occupies a commanding position on the Queens side of the borough's western border with Brooklyn. (Click to enlarge.) Mitch Waxman will be leading a Calvary walking tour on Saturday, August 22, 11am to (approx.) 1pm.
by Ken

Awhile back Mitch Waxman devoted a Newtown Pentacle post to Queens's First Calvary Cemetery ("ordinary interpretation," August 5), when he called it "my favorite place in Queens." That post has taken such root in my head that I was delighted when he mentioned during his recent walking tour of Newtown Creek's Dutch Kills tributary that he'd cleared a date for a walking tour there: Saturday, August 22. The date left me with a bad feeling, and sure enough, when I was able to check my calendar, I was reminded that that's already my date from scheduling hell.

I'll first be LIRR-ing it out to Port Washington, on the eastern shore of Long Island's Manhasset Bay, for a 2pm "Great Gatsby Boat Tour" with the Art Deco Society of New York, which you better believe I signed up for as soon as I saw the announcement. (And wisely so. ADSNY has a waiting list for the event.) I have been to Port Washington, and fairly recently; it was our lunch stop on a bus tour with Justin Ferate, en route between visits to two noteworthy Long Island estates. But I've never been out on a boat in Manhasset Bay.

Where things get crazy is that from there I absolutely must catch the 4:39pm train out of Port Washington, which, if everything goes right, should get me to the LIRR Woodside (Queens) station in time to get to the Museum of the Moving Image in Astoria for a 6pm screening of Lawrence of Arabia in 70mm. (Lawrence is also being screened at 4pm Sunday the 23rd, but in order to do that I would have to leave an MAS tour of Brooklyn's Grand Army Plaza with Francis Morrone after an hour or even less.)

If I were really crazy, I could top the day off with a wild overnight (10pm-1am) Obscura Society of New York outing to "a hidden Chinatown den of iniquity" for "The Cheaters Party -- A School for Scoundrels," where participants will be given demonstrations in the art of card-playing sleight of hand, including, yes, full-fledged cheating, with opportunities (and, yes, permission) to try out this newly acquired, er, skill, not to mention indulging an open bar dispensing "Rat Pack-inspired cocktails"! Actually, what's holding me back isn't so much a lack of craziness as a lack of any known gambling instinct. And even that open bar isn't the lure it might once have been. Also, music is promised, and I would expect that to be both deafening and horrible.) 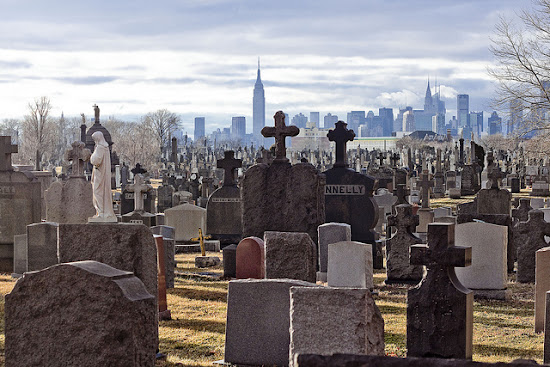 First Calvary Cemetery, with a view! Photo by Mitch W (click to enlarge)
By the way, Mitch -- wearing his hat as official historian of the Newtown Creek Alliance -- will also be participating in a pair of Open House New York boat trips up his "beloved" creek, along with NCA program manager Will Elkins and representatives of the NYC Department of Environmental Preservation (and I think I read somewhere of the EPA) on Thursday, September 3, at 5pm and 7pm. Scroll down to "Newtown Creek Boat Tour" on the OHNY programs page, or go directly to the ticket and booking info.


"LIFE ON THE L TRAIN" WITH JACK EICHENBAUM

The L train has a fascinating history -- and a booming present and near-term future, as ridership has been undergoing huge increases. (Click to enlarge.)
As regular readers are aware, one of my favorite genres of NYC tours is Jack Eichenbaum's day-long single-subway line explorations -- most famously his "World of the #7 Train" (the Flushing line), which he describes as his "signature" tour, and which he does pretty much every year. Over the length of the route, Jack has picked out half a dozen stops as sites for mini-walking tours of neighborhoods that not only are enormously different from one another but have rich and various histories unto themselves, all scheduled around a long lunch stop at the Flushing end of the line, with all the dining options of Flushing's flourishing Chinatown and Koreatown.

I was delighted finally to get to "do" the #7 train again in June, at which time Jack noted that by the next time he does this tour, it will undergo major changes, starting with the incorporation of the under-construction extension of the #7 from Times Square to the Javits Center at 11th Avenue and 34th Street. (Completion dates have come and gone fairly regularly since the days when then-Mayor Bloomberg liked to terrorize NYC Transit with phone calls demanding to know when it would be done. Mayor Mike really didn't have much interest in improved transit as such, but he wound up deeply immersed not just in the #7 expansion but in the massive East Side Access project that will bring Long Island Rail Road passengers into Grand Central Terminal -- because they're both crucial to multi-zillion-dollar area redevelopments, something our billionaire ex-mayor was very interested in.)

Jack does other subway lines too, though, in that same basic format: usually a half-dozen mini-walking tours along the route, visiting enormously contrasting neighborhoods with even more contrasted histories. In recent years I've had the pleasure of joining Jack in explorations of the J line, which runs from Lower Manhattan across to Brooklyn and on into Queens, and Brooklyn's Brighton Line (now the Q), the descendant of one of the original steam railroads to the resort haven of Coney Island. During the June "World of the #7 Train," Jack announced that he would soon be doing the L train, which actually functions as a crosstown subway in Manhattan, running across 14th Street from Eighth Avenue to First Avenue, then under the East River to Brooklyn's Williamsburg and Bushwick and onward, till it comes to rest in Canarsie, within bus reach of the shore of Jamaica Bay.

Somehow I missed Jack's announcement of the actual date -- Saturday, October 17 -- and by the time I learned the date, I had a schedule conflict, and now that MAS tour prices have increased to $20 for members ($30 for non-members), I'm not as quick to blow off the tour I've registered for as I might once have been. (Besides, I want to do that tour!) So it looks like I'm going to miss:

The L train has a complex history: first as a steam railroad line, later as an elevated BRT train, eventually integrated into the subway system with its expansion to Eighth Avenue in Manhattan in the 1930’s. Beginning in the 1950’s the L train has stimulated artist-spearheaded gentrification along its route. We’ll explore the West Village and meatpacking district— including a portion of the new Highline Park— and then on to the East Village, Williamsburg, East Williamsburg, Bushwick and Ridgewood, noting the status of transformation in each of these neighborhoods.

This tour is limited to 25 participants and requires registration by check of $42/pp to Jack Eichenbaum, 36-20 Bowne St #6C, Flushing, NY 11354. For a prospectus and any questions, contact Jack at jaconet@aol.com

These days, owing in good part to its Williamsburg (and now Bushwick) connection, the L train is the city's fastest-growing, ridership-wise, and has gone from being a stepchild of the system to its proudest prodigy, with much-improved service finally catching up to the dramatic increase in use.

I should mention too that both the New York Transit Museum and the Municipal Art Society have announced and begun booking tours for September and October.

As noted, the fall MAS offerings come with the price increase (I mentioned earlier, from $15 to $20 for members, and from $20 to $30 for non-members). On the plus side, tour registrants now get nearest-transit information for the meeting point (not exactly an innovation, since this used to be included in all tour descriptions) and also -- and this is new, and most welcome -- approximate tour end-point information.
All of this was mentioned in a covering e-mail to MAS members. What was not mentioned, and I didn't in fact learn until I registered for five tours that I knew I wanted to do and didn't want to get closed out of, is that tours have been shrunk from two hours to 90 minutes.

Of course we don't buy tours by the minute, but if we did, then the member price has increased not by 33 percent but by 78 percent, and the non-member price not by 50 percent but by a full 100 percent. It's not the price that concerns me, at least not so much, as what represents a radical change in format. A 90-minute tour isn't just shorter than a 120-minute one; it's really a different animal, especially when you consider how long it takes any tour to actually "get going." And while there are undoubtedly tour subjects that are better-suited to a 90-minute format, and would have to be padded out to fill two hours, a two-hour tour that was a proper two-hour tour to begin with is probably going to have to be reconceived to make the cut, and I can't help thinking shrunk in ways other than just time.

In fact, the two-hour format, which has become a much more rigidly enforced time limit since I began doing MAS tours not that many years ago, was really more like two and a half hours back then. I gather, though, that MAS received enough complaints to start cracking the whip about the time limit. This boggles my mind, that people would complain about getting more than they paid for. But there you are.

Clearly the people in charge believe that this is what people want. (I'm pretty sure that I don't count among the "people" they're concerned about.) And the September-October list contains lots of interesting-looking offerings -- I jotted down 17 tours I was interested in, after allowing for known schedule conflicts. As I mentioned, I've already registered for five, and it was when I downloaded my tour info that I discovered that what I registered for are 90-minute tours. Suddenly I found myself thinking that maybe the five tours I've registered for will do it for me.

Like I said, at some point we should probably talk about this. But not now.