NYC Watch: "See It Big! 70mm" at the Museum of the Moving Image. Plus an Urban Gadabout note: "I Remember NY" 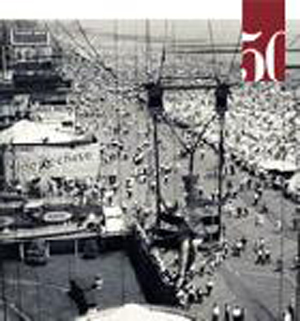 Coney Island (this Sunday, August 9) is one of two neighborhoods tour leader Joe Svehlak will be revisiting this month in his Municipal Art Society series I Remember New York. Also coming up is Downtown Brooklyn (Sunday, August 30). See below.

As I mentioned recently, I wiped out most of a day of potential Jane Jacobs Weekend walks to catch a 70mm screening of Robert Wise's 1965 film version of The Sound of Music, which as it happened I had never seen in any form, at the Museum of the Moving Image. These days, as digital projection takes over for theatrical showing even of movies that weren't made digitally, it's getting harder and harder to see films on, you know, film, and the 70mm jobbies -- forget about it. At the MoMI Sound of Music event, though, Chief Curator David Schwartz mentioned that the museum would be showing a 70mm print of West Side Story -- the 1961 film musical Wise had already directed which established him as candidate for the Sound of Music film when, apparently, nobody else wanted to direct it -- in an upcoming installment of its See It Big! series, this one devoted to 70mm films.

Well, See It Big! 70mm is here! Eight films, ranging chronologically from 1961 (West Side Story) through 2014 (Interstellar), each being shown either two or three times between August 7 and August 30.

As the introduction to the series notes:


With a higher resolution and more light hitting the frame, 70mm film offers a bigger, brighter image than 35mm. It also offers richer sound, with more space on the soundtrack. It is the ideal film format for ambitious cinematic spectacles, yet with the transition to digital filmmaking, 70mm movies have become increasingly rare.

But, as the introduction goes on to note, 70mm hasn't been entirely abandoned.


Filmmakers like Paul Thomas Anderson and Christopher Nolan are keeping the tradition alive, with films that were surely inspired by the work of Stanley Kubrick, David Lean, Douglas Trumbull, and Robert Wise. From West Side Story to Interstellar, here is a selection of great 70mm films, including adventure, comedy, drama, musical, and science fiction -- and all indelible experiences.

THESE ARE BIG MOVIES

In the listing below, culled from the museum's listings, it occurred to me to include the films' running times, because so many of these are really big time-wise in addition to film-format-wise. Four of the eight are over 2½ hours, and a fifth, Interstellar, is only six minutes short. Two, in fact, are over 3 hours, and one is over 3½ -- Lawrence of Arabia, of course. Although director David Lean has been dead for 24 years, there are people who'll swear that the movie still hasn't ended.

It's a wild mix of films. I'm taking a pass on 2001, which I just saw at MoMI in 70mm -- but if you haven't seen it in 70mm, you should. It doesn't solve the film's problems or plug its gaps, but for the considerable effect it makes nevertheless, it really should be seen in full format. But I'm hoping to get to all the others -- some that I haven't seen, or seen theatrically, since they were new, and four that I've never seen at all.

It's the usual MoMI deal: Screenings are free for members at the "Film Lover" level and above; for others it's $12 ($9 for senior citizens and students), which includes museum admission for that day. Both members and nonmembers can book ahead; go to the link below and if you prefer follow it to the alternate date(s); then click on the "Order tickets online" link. I would be especially careful with the films that are only being shown twice.

With a higher resolution and more light hitting the frame, 70mm film offers a bigger, brighter image than 35mm. It also offers richer sound, with more space on the soundtrack. It is the ideal film format for ambitious cinematic spectacles, yet with the transition to digital filmmaking, 70mm movies have become increasingly rare. Filmmakers like Paul Thomas Anderson and Christopher Nolan are keeping the tradition alive, with films that were surely inspired by the work of Stanley Kubrick, David Lean, Douglas Trumbull, and Robert Wise. From West Side Story to Interstellar, here is a selection of great 70mm films, including adventure, comedy, drama, musical, and science fiction -- and all indelible experiences.

This month Joe Svehlak, the total sweetheart among NYC tour guides, a lifelong New Yorker who pours passion as well as charm into his tours, and has always given a generous sense of historical development in his neighborhood walking tours, has two more tours coming up in the wonderful "I Remember New York" series he's been doing for the Municipal Art Society: Coney Island this Sunday, August 9, 10:30am-12:30pm, and Downtown Brooklyn.

These will be more personal versions of popular tours Joe has been doing for some time, tracking changes in these much-changing neighborhoods. His tours have always been personal, but in this I Remember New York series he's undertaken at age 75, he has been unabashed in sharing his history with the places he's leading us through. It says something about Joe that I run into him all the time taking other people's tours; his enthusiasm and curiosity seem if anything to have continued growing with time.

On the first tour in the I Remember New York series, Joe mentioned that at his age he doesn't know how much longer he'll want to continue leading tours, and for anyone who appreciates the value of experience and memory, the walks in this series so far have been treasures. On those my schedule has enabled me to do, there was a special warmth to this walk through Manhattan's Financial District, where he had his first job and later worked for a considerable time; and then in the two-part traversal of Brooklyn's Sunset Heights, where he did much of his growing up and later returned as a first-time homeowner and pioneering preservationist. I really should have posted something about the series sooner. Sorry!

Not to mention that Joe is just good company. Again, there are links for online registration for both members and nonmembers. I'm embarrassed at how long it took me to find my way to MAS; now I can't imagine not being a member.

Join tour guide and preservation activist Joe Svehlak who still swims here, to reminisce about Coney Island in his younger years when Steeplechase Park was still a great amusement attraction before it was demolished in the 1960s. Hear Joe describe the thrill of the Parachute Jump and the Steeplechase. In addition to Steeplechase Park, Joe remembers four rollercoasters, merry-go-rounds, and an assortment of other rides, sideshows and games of chance. Both the Cyclone rollercoaster and the Wonder Wheel are New York City landmarks and a testament to Coney Island's illustrious past and resilience. We'll also view a new amusement park, a restored carousel, and two poignant memorials by the ballpark. Stroll the boardwalk as Joe remembers family outings, amusements, bathhouses, and other facilities and attractions by the sea. On our walk we'll learn about Coney Island's honky-tonk past and issues of preservation and planning for the future. Coney Island has seen many changes in Joe's lifetime. He's happy to see it coming back with new amusements, activities and restaurants. Stay for a swim and treat yourself to a Nathan's Famous! Please note that this tour has been offered before with a slightly different theme, and there may be significant overlap in content. Cost: $20 / $15 Members

In his lifetime, tour guide and preservation activist Joe Svehlak has seen major changes Downtown Brooklyn. Growing up in the 1940s and 50s, Joe remembers Brooklyn's Downtown as one of New York City's premier shopping and entertainment centers, with grand elegant department stores, specialty shops, fine restaurants and magnificent movie palaces. He would look forward to the special holiday shopping trips Downtown and the occasional treat of a movie in one of the great theaters. By the 1970s economic decline, the days of the grand department stores were over. The Fox and the Albee theatres were demolished for other commercial purposes. The Paramount became part of Long Island University and the Metropolitan is now the Brooklyn Tabernacle. Fifteen years ago Joe moved Downtown and is now witnessing dramatic high rise construction all around him. New streetscapes and plazas are adding to Downtown Brooklyn's new livability. New Hotels and shops are opening and even a new park is planned. Joe's thoughts and memories will guide us through his neighborhood as we view old civic buildings, new commercial development, designated New York City landmarks, the revitalized Fulton Mall, redesigned Flatbush Avenue, Metro Tech expansion, and even some surprising religious edifices. End by the landmarked monumental Dime Savings Bank and Junior's Restaurant, noted for its cheesecake. Please note that this tour has been offered before with a slightly different theme, and there may be significant overlap in content. Cost: $20 / $15 Members

The new walking-tour schedule, likely to cover September, October, and November, should be coming out in the next week or two. Meanwhile there are still a whole bunch of really interesting-looking walking tours that can still be booked for August. Check them out here -- or go to mas.org anytime and click on "Tours."