Urban Gadabout: Last call for the latest incarnation of Jack Eichenbaum's "World of the #7 Train" extravaganza 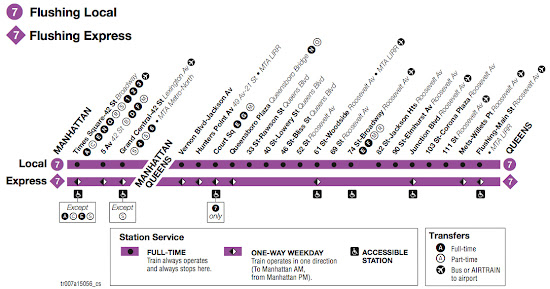 The route of the #7 train, from Times Square at the western end (pending the still-unfinished expansion to the west and south, to 11th Avenue and 34th Street), across 42nd Street in Manhattan, through the Steinway Tunnels under the East River to Queens, and on to Main Street, Flushing -- click to enlarge

It looks like this time NYC Transit has no last-minute obstacles to throw in our path, and so this Saturday, June 13, urban geographer (and Queens Borough Historian) Jack Eichenbaum expects to do the latest incarnation of what he always refers to as his "signature tour": the all-day "World of the #7 Train" extravaganza.

I've written about this famous trek a number of times, and have been eager for an opportunity to do it again, especially since I know that Jack has done some revamping of the tour to reflect ongoing changes in the neighborhoods covered, most of which have been heavily influenced (if not actually created) by the coming and continued operation of the #7 train. But the last time he scheduled it -- or was it the last two times? -- fate, or rather NYCT, intervened. We gather in Manhattan at 10am and stagger to the finish line around 5:30pm at the 74th St.-Roosevelt Ave. megastation of the #7 and the E, F, and R lines. I think Jack may be able still to handle late registrations, but you should contact him ASAP -- e-mail him at jaconet@aol.com.

Here's how Jack describes the event on his website, "The Geography of New York City with Jack Eichenbaum":

This series of six walks and connecting rides along North Queens’ transportation corridor is my signature tour. We focus on what the #7 train has done to and for surrounding neighborhoods since it began service in 1914. Walks take place in Long Island City, Sunnyside, Flushing, Corona, Woodside and Jackson Heights and lunch is in Flushing’s Asiatown. Tour fee is $42 and you need to preregister by check to Jack Eichenbaum, 36-20 Bowne St. #6C, Flushing, NY 11354 (include name, phone and email address) The full day’s program and other info is available by email jaconet@aol.com

The tour is limited to 25 people.

Imagine, all this for a paltry $42! In the information-and-itinerary sheet for the tour, Jack adds this:

Your tour leader, Jack Eichenbaum, Queens Borough Historian, maintains a storehouse of researched facts and biased memories of bygone eras. I hold a Ph.D in urban geography, teach Geography of NYC at CUNY and have been riding the #7 for six decades. My expertise lies in historical geography and ethnic and technological change. I focus on what the #7 train has done to and for the surrounding neighborhoods since it opened in 1914. The #7 has been designated a “National Millennium Trail” for its pioneering role in transporting people in what is probably the most demographically diverse cityscape in the world. 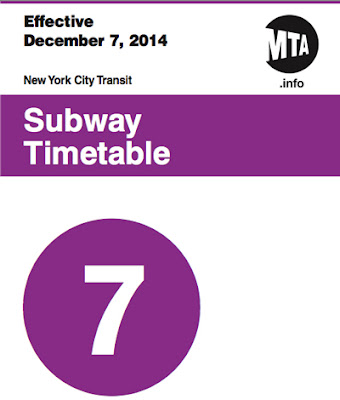