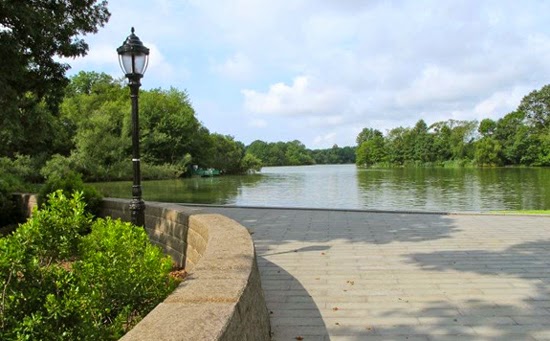 Part of Prospect Park's restored Lakeside: The two Lakeside tours are booked up, but reservations aren't required for an OHNY visit to Lakeside. The list of no-registration events is here.

I realize that a last call for Open House New York Weekend, which takes place tomorrow and Sunday, isn't likely to be of great interest to non-New Yorkers. It should be of paramount interest to New Yorkers, though, and I think others might, if only in the service of curiosity about the world around us, want to at least glance through the roughly a zillion listings on offer. (The event listing, sortable using all kinds of filters, is here.) EVen if you can't get to any of the events, the listing seems to me a fascinating guidepost to a way we've arrived at of looking at our physical past, present, and future.

And practically speaking, if it's too late for you for this year, there are way foolhardier things you could do than pencil in a descent on Gotham for next year. (Figuring on the second weekend in October, I would be looking at Oct. 10-11, 2015. The dates are actually announced well in advance. It's the list of events that's kept under wraps until practically game time.)

As for those who are within striking distance of the city, you still have hundreds if not thousands of events and sites available. It's true that the events that required registration were gobbled up by some 7500 of us, according to OHNY, beginning the instant that online reservations began on October 1. The thing to stress, however, is that most OHNY Weekedn events don't require registration, which you can simply drop in on tomorrow and Sunday. And the fact that they don't require preregistration doesn't make them any less interesting than the events that do.

By way of illustration of just how subjective the appeal of the multitude of attractions assembled by OHNY is, I offer my own experience of "reservation day." Last year I didn't even bother participating in the mad scramble. I always say I never expect to get higher than my fifth or sixth choices. Howver, I also say that, fortunately, my fifth and sixth choice are still terrific things to see and do. In fact, there are usually a couple of hundred things I'd be happy to do.

But this year I decided to give the opening-bell insanity a shot. I had prepared my wish list as best I could. I was online at the start of registration, and while I never even saw many of the events I'd noted on the list of things to click, and others when clicked turned out to be sold out, I did spot a number of "my" items, and by the time I scraped myself off my chair I had bagged five, four for Saturday and one for Sunday, and they're all things I'm really happy to be doing. Not content to let well enough, though, I checked back occasionally on some of the things I'd signed up for, expecting to find them booked up (wouldn't that have felt good?), and found that only one was. In fact, that night I checked all of "my" events -- and found that at the end of the day four of them were still bookable!

So tomorrow morning at 10am I'm due at the Lakeside development on the southern end of Brooklyn's Prospect Park, where I haven't been since two Octobers ago, when I did a pair of tours as part of the Cultural Landscape Foundation's What's Out There Weekend in New York (the same weekend as OHNY!) with Christian Zimmerman, the park's chief landscape architect. First was a tour of the park's legendary Long Meadow and the contiguous Ravine, where Christian and his team had done some amazing restorations and rebuilds. Then came a tour of a massive project he was overseeing, the largest construction project in the park since it was built: a complete rebuild of its southern end to restore much of it to something close to the majestic and functional original design of Calvert Vaux and Frederick Law Olmsted, which through decades of abusive misconstruction had been transformed into a travesty.

This involved reconstructing the whole southern end of the Lake, and a lot of the northern end as well, and around the Lake and in the nearby areas reinstalling many original features that had been found and re-creating most of the others that had been "disappeared." Tha part of the park was then within days of reopening, but there was an even more impressive venture afoot: the construction of a whole new multi-use facility, cunningly designed into the landscape of the park and incorporating two skating rinks, a water feature, a raft of amenities including rest rooms and paths for runners, and goodness knows what else. (You can read about Lakeside Brooklyn, as the entire "26 acre multi-purpose recreational destination" is known, at the link.) Christian showed us all around the building as it existed then, in an advanced state of construction but still more than a year from completion. The LeFrak Center, as it would be called, finally opened in December 2013, but I haven't been back to Lakeside since October 2012.

Tomorrow, I gather, the architects of the new building will be joining Christian as he shows us the whole completed Lakeside section of the park. I was thrilled that I was able to book the Lakeside tour, and figure it must surely be one of the prizes among the OHNY offerings. But no, it was one of my four "catches" that could still be had for the registering that night.

By the way, although the tour was booked up in advance, Lakeside itself is very much on the OHNY "available" list, both Saturday and Sunday, 10am-6pm:


Lakeside is the largest and most ambitious project in Prospect Park since the Park's completion nearly 150 years ago. Spanning 26 acres, this $74 million restoration by the Prospect Park Alliance honors the original design while transforming an underutilized section of the Park into a popular scenic and recreational destination. Lakeside features the Chaim Baier Music Island and Shelby White and Leon Levy Esplanade, and the Samuel J. and Ethel LeFrak Center, which provides the public with seasonal  ice skating, roller skating, water play, and boat and bike rentals; a year-round cafe and restrooms; beautifully landscaped viewing terraces.

From Prospect Park tomorrow I head to Hunter's Point, Queens, and while the easiest way to make the trip, as in the case of most mass-transit connections between next-door Brooklyn and Queens, is via Manhattan, I've figured out a route that, in the spirit of Open House New York, involves a quick subway trip to Downtown Brooklyn to catch the B62 bus, which eventually crosses the Pulaski Bridge over Newtown Creek into Long Island City, Queens. Then for me it's back to Manhattan, via the No. 7 and No. 6 trains, to the Eleanor Roosevelt House at Hunter College, and finally downtown to the Staten Island Ferry to catch the evening program devoted to the lighting plan of the extraordinary "Postcards" 9/11 memorial, which I've seen a number of times, but never at night. Sunday morning I'll be at the eastern end of 96th Street in Manhattan, on the Esplanade, for a look at "A New Edge for the East River Esplanade." After that, assuming I'm up to it, I've been looking at hundreds of non-registration things I could still do the rest of the day. 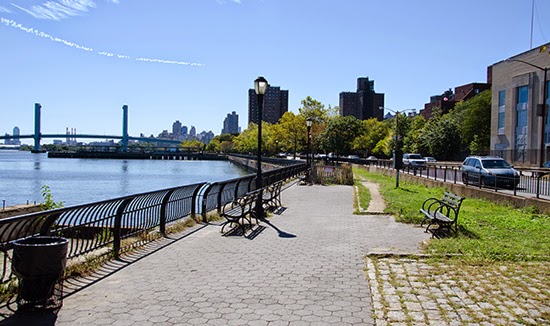 "A New Edge for the East River Esplanade": The Saturday and Sunday OHNY tours are sold out, but if you read the tour description, nothing stops you from visiting the site yourself.

It's one of NYC's great organizations, worthy of any support anyone might wish to offer. The most self-interested way to support OHNY is by becoming a member, which not only helps the organization financially but sets you up for all sorts of member benefits. As usual with these things there are various levels of membership, but even the basic one gets you notice of all sorts of events scheduled by OHNY throughout the year, some for members only, others offered at a member-discount price. I've had such a grand time in my first year of membership that I'm almost looking forward to renewing. For all information turn to the website, which is the impossible-to-forget ohny.org.