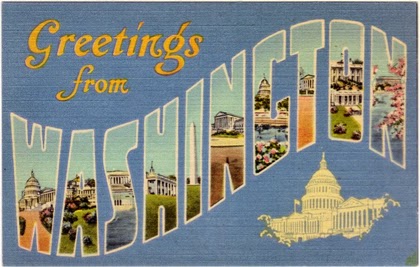 Thanks to the miracle of modern blog scheduling technology (which works more or less like that great space-age technological innovation the alarm clock), by the time you read this (or don't), I should be back with NYC limits after my whirlwind descent on Washington, D.C. That's if all went according to plan, which is not one of those assumptions I like to assume, especially when the first part of the plan puts me on a sidewalk outside a McDonald's on Seventh Avenue at 6:15am.

Now I'll bet that when you first learned I was winging off to Our Nation's Capital today (this would be in the paragraph above), you probably thought I must be going with the express determination to knock some of those wooden Village heads together and maybe knock some sense into them. This is so close to the actual facts as to make the few trivial deviations hardly worth chronicling. However, for the record:

(1) There's no winging. It's such a hassle getting all the way out to the airport, and then getting from the airport into Washington. Who needs that? As we New Yorkers say, fuhgeddaboutit! No, I'm traveling the way people who are really in the know make the trip: by a tourist bus that, according to my best information, I will board outside a McDonald's on Seventh Avenue.

I think this qualifies as "tourist class." It is, at that, a class above the transport I used for my last D.C. outing, some years ago, when Howie had traveled east on People for the American Way business and wangled me an invite to a local soirée, which would give me a chance to see him, and I had the inspiration to do the trip via one of those Chinatown buses with the amazingly low fares. (Okay, yes, and also the not-quite-rock-bottom accident and casualty rates.)

The only thing was, the schedule clearly wasn't designed for day-tripping.

(2) I don't expect to be seeing any of Those People, those creepy D.C. types you're always reading about here at DWT. I don't know any of them, and I don't want to know any of them. I would have to check the itinerary again, but I'm pretty sure it includes the Capitol, and I suppose there's the remote possibility of incidental contact with some of those Villagers, but I suspect that the highest-ranking Washingtonian I'll be encountering is our tour guide.

And the fact is, the fact that the district is infested by those people is creeping me out, which brings me to this additional circumstance --

(3) I don't really wanna go. Oh, I had planned a trip for the day. Even scheduled a day off from work (which itself has to be done, according to the employee manual, weeks -- if not months -- in advance) for it. It's just that the trip wasn't supposed to be to D.C. It was supposed to be to "Historic Boston," where I haven't been in way longer than it's been since I was last in D.C. And I was really psyched for Beantown!

I had it all planned. I had bought an Amazon Local voucher for the "Historic Boston" tour, and kept checking the calendar for a suitable Friday or Sunday, the days when it's supposed to be offered. Finally, with the voucher's expiration date looming, I figured the crowd would be lighter on a Friday, and also some places that might be closed on Sunday might be open on Friday. So I took a hard look at my schedule, and went through the whole elaborate procedure for clearing a Friday off from work -- namely the one that turned out to be this Friday.

Only, I appear to have overthought this. Earlier in the week I heard from the company that I was apparently the only one who had signed up for that date.

I was offered some options, not just for Boston, but for the company's Philadelphia and Washington tours. But my schedule doesn't allow for much in the way of options. I couldn't do a weekend tour, because Saturday I'm cruising across New York Harbor's Raritan Bay to New Jersey for Fall Fest on an apple farm and Sunday I'm doing Justin Ferate's Wolfe Walkers train trek to Philip Johnson's Glass House in New Canaan, Connecticut. All I had to play with was Friday, the day I'd already scheduled to have off from work. The vision of a day off began to dance in my head, but no, it turned out that they have an extra outing of the apparently very popular Washington tour -- normally offered on Monday, Tuesday, Wednesday, and Saturday, according to the online schedule -- going on Friday.

Oh well, what the heck, Washington it is, I guess. Assuming that this crack-of-dawn pickup outside McDonald's actually comes (or rather came) off. Which makes for three consecutive days of out-of-state schlepping -- by bus, boat, and train. Not to mention after-work outings Monday (the second part of a two-part Historic Districts Council walking tour of Park Avenue with Justin Ferate) and Tuesday (first I pop in for a few minutes of the Municipal Art Society's members' open house in their new digs, in the landmarked Look Building, en route to Astoria for an evening at the Museum of the Moving Image honoring Marlo Thomas for That Girl, moderated by Gloria Steinem, with Debra Messing also on hand). I already feel exhausted.