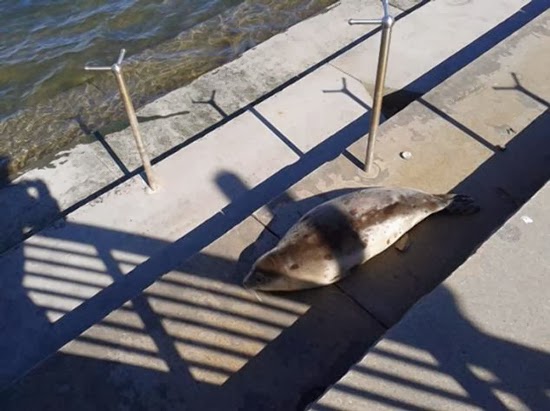 The long steps of the Newtown Creek Nature Walk, fronting directly on the creek, attracted a maritime visitor yesterday. (The photos were taken by Sean Scaglione for NYC's Departmental of Environmental Protection.)

Newtown Creek, which separates the New York City boroughs of Brooklyn and Queens, may be one of North America's most contaminated waterways, which means that most visitors to the Newtown Creek Nature Walk, one of the city's most wonderful attractions, came from the landward direction. The youngster pictured here, however, on an exceptionally nice late-winter day, came from (and presumably left by) the water.

Baby Harp Seal Has a Sunday Sunbathe on Newtown Creek 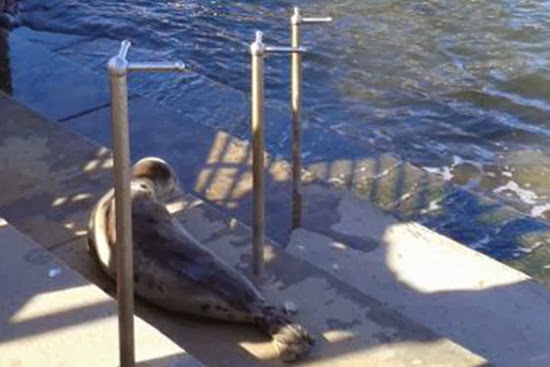 A baby seal was seen lounging on a step at the Newtown Creek Nature Walk yesterday. No, the chubby critter was not sick, he or she just thought they’d stop by for snack and a bit of sun.

As reported by the New York Daily News, the baby harp seal plopped itself on a low step at the Newtown Ceek Nature Walk which is a public access point to the contaminated waterway.
Officials believe the seal swam in on the high tide in search of a meal, and decided to stick around for a sunbathe before heading back out on the receding tide. “There were no injuries and no concern, the animal appeared to be alert and aware.”


New York Daily News: A group of teens skating nearby said they were startled by the sight of a baby seal on the pavement around 2 p.m. at the Newtown Creek Nature Walk.

Damian Snickersen, 14, said he and his friends tried to coax the adorable seal to the water without touching it. “It looked scared. It was a baby seal, not too big, like the size of a dog, a fat dog,” he said. “We wanted to lead it to the water but we didn’t want it touch it.” Read more at The NYDN here.

ABOUT THE NEWTOWN CREEK NATURE WALK 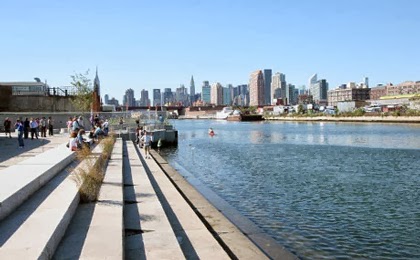 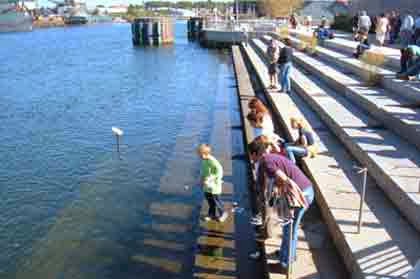 The Newtown Creek Nature Walk, on the southern (Greenpoint, Brooklyn) bank of Newtown Creek, which at this point serves as the boundary between Brooklyn to the south and Queens to the north, is at the same time a park (open to the public every day during daylight hours, weather permitting; it's one of the most wonderful spots in New York City to visit and hang out) and a gigantic work of art.

The long steps that fronting directly on Newtown Creek, are just one of the many components of this amazing space along Newtown Creek and one of its tributaries, Whale Creek. The steps afford an up-close view of Newtown Creek which was never available to the public before. At low tide all the stairs are above water level, but as the tide rises, the lower stairs are submerged. It's a fantastic place to just stand or sit and watch for as long as you like. The photos above show the steps facing west toward the point where Newtown Creek flows into the East River (with Brooklyn at left and Queens at right), and across the river the skyline of Manhattan. The lower photo faces east (with Queens at left and Brooklyn at right), toward the creek's inland continuation.

New York City's Department of Environmental Protection, which operates the nearby Newtown Creek Wastewater Treatment Plant, has a great flier for the Nature Walk, with excellent descriptions of its fascinatingly diverse array of components. This is from the introduction:

The Newtown Creek Nature Walk is situated serenely between industrial and natural areas. The landscape features indigenous trees, shrubs, grasses, wildflowers and boulders that re-imagine this open space as a vibrant intersection, where multiple histories, cultural identities and geologic epochs coexist. Visitors are inspired to ponder the various eras of Newtown Creek, from its inhabitance by the Lenape people before the arrival of Europeans, to the thriving cooperage, ship-making and lumber industries of 18th and 19th century Greenpoint. The Nature Walk affords the public its first opportunity in decades to enjoy intimate views of Newtown Creek and to enjoy the local environment and history of the waterfront.

On one of my visits to the Newtown Creek Nature Walk, our MAS tour led by Jack Eichenbaum had the great good fortune to piggyback onto a tour being led at the same time by the designer, George Trakas. Everywhere we looked George was able to tell us riveting stories about the conception, design (including the choice of materials), and execution of whatever we were seeing, as well as the plans for later phases of the Nature Walk. If there had been time, I'm sure he could have told us stories about every square inch, horizontal and vertical, of the place.

One thing that quickly became abundantly clear was that George's close involvement with the Nature Walk didn't end or even lessen with the completion of the design, or even the construction of the project's first phases.