Thailand-- The Monks vs The Katoeys

Thailand has the most wide-open sex trade scene I've ever observed in any country I've visited. I suspect it's why Thailand gets so many millions of tourists every year, tourists from every corner of the world. And now, not just tourists from every corner of the world, but-- a new thing as far as I can tell-- prostitutes from every corner of the world. Russian, Eastern European and African prostitutes are now competing with the native ones in Bangkok's Pat Pong district-- which is, at least superficially, more like a Disneyland than a traditional red-light district. Even without the sex trade, Thailand is one of the most beautiful, varied and rewarding destinations anyone could hope to find anywhere. But, like I said, I suspect all those elderly European single men and determined Arabs aren't in Bangkok to visit Wat Po or sample royal court cuisine. I was a little dubious when Roland told me he saw Russian girls working as "hostesses" in the Pat Pong "bars." A few days later I saw a "masseuse" from Romania offering his services at a gentleman's club in a more staid part of town, the "boy's town" gay bars in Pat Pong long ago having lost any allure for all but those looking for laughs.

In the video above, you see something about how Thais are more accepting of a "gender-bending" approach than red state Americans. But that doesn't mean that it's all clear sailing for Thai katoeys, or ladyboys. Yesterday I found this story about Thai monks trying to teach maleness to ladyboys.

The 15-year-old aspiring "ladyboy" delicately applied a puff of talcum powder to his nose-- an act of rebellion at the Thai Buddhist temple where he is learning to "be a man."

"They have rules here that novice monks cannot use powder, make-up, or perfume, cannot run around and be girlish," said Pipop Thanajindawong, who was sent to Wat Kreung Tai Wittaya, in Chiang Khong on the Thai-Laos border, to tame his more feminine traits.

But the monks running the temple's programme to teach masculinity to boys who are "katoeys," the Thai term for transsexuals or ladyboys, have their controversial work cut out.

"Sometimes we give them money to buy snacks but he saved it up to buy mascara," headteacher Phra Pitsanu Witcharato said of Pipop. 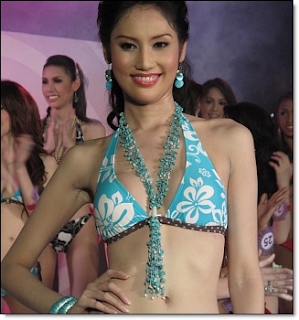 Novice monks' days pass as in any other temple-- waking before dawn, collecting alms and studying Buddhism-- but every Friday attention turns to the katoeys at the attached school.

"Were you born as a man or a woman or can you not specify your gender-- not man or woman?" asked Phra Pitsanu at a recent assembly. "You cannot be anything else but your true gender, which is a man. As a novice you can only be a man."

The temple has a stricter interpretation than others of rules governing behaviour during Buddhist training that is a key childhood experience for many Thai boys.

Pupils are banned from using perfume and make-up and prohibited from singing, playing music and running.

"We cannot change all of them but what we can do is to control their behavior to make them understand that they were born as a man... and cannot act like a woman," said Phra Pitsanu.

The Kreung Tai temple has run the course for boys aged between 11 and 18 since 2008, after former principle Phra Maha Vuthichai Vachiramethi devised the programme because he thought reports of katoeys in the monkhood had "affected the stability of Thai Buddhism."

He told AFP that he hopes the teaching methods will be rolled out to other temple schools to "solve the deviant behavior in novices."

It is an attitude that enrages gay rights and diversity campaigner Natee Teerarojanapong, who said trying to alter the boys' sense of gender and sexuality was "extremely dangerous."

"These kids will become self-hating because they have been taught by respected monks that being gay is bad. That is terrible for them. They will never live happily," he told AFP.

Gay and katoey culture is visible and widely tolerated in Thailand, which has one of the largest transsexual populations in the world, and Natee said the temple's programme is "very out of date."

But Phra Atcha Apiwanno, 28, disputed the idea that society accepted ladyboys and said he joined the monkhood because of social stigma about his sexual identity.

"The reason I became a monk is to train my habits, to control my expression... I didn't want to be like this," he told AFP.

Monks have had limited success in their project-- three of the six ladyboys to have graduated from the school are said to have embraced their masculinity, but the remaining three went on to have sex changes.

Pipop said he has struggled with his sexuality at the temple.

At home in Bangkok he dressed like a girl, putting on make-up and taking hormones until he developed breasts, but he has since stopped the treatment and wears only a surreptitious dab of powder at the temple.

He does not believe he will live up to his family's hopes that he will become more manly.

"I can make them proud even I'm not a man," the teenager said, adding he had given up his ambition to be an airhostess and now aspires to work in a bank.

He thinks he will have a sex change after graduation.

"Once I leave the monkhood the first thing I want to do is to shout, to scream out loud saying: 'I can go back to being the same again!'"

Posted by DownWithTyranny at 10:30 AM