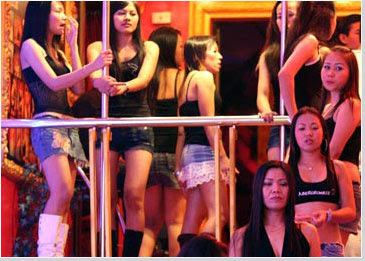 Saturday night Pat Pong was was relatively quiet. Like all bars in Thailand, Bangkok's tourist-oriented, even Disneyland-like, red light district wasn't serving alcohol... and many of the hostesses and hosts were back in their hometowns to vote Sunday. Sunday is election day.

Sunday voting is a great idea-- working people have the day off-- something American conservatives have always adamantly opposed as a way of holding down participation from the poorer classes. Here in Thailand voting goes 'til 3pm. Public transportation in Bangkok is free of charge Sunday between 6AM and 4pm to encourage voters. Online political messages were banned after 6pm Saturday. Vote buying is widespread. [A 100 baht note is about $3.00.]

Police stepped up efforts to crack down on vote-buying Saturday and arrested three people in Samut Prakan and Maha Sarakham provinces suspected of involvement in the practice.

Somjai Uan-takhop, 55, a grocer in Samut Prakan's Muang district, was arrested for allegedly handing two 100 baht bank notes to Anusorn Thongkon, 51, and asking him to vote for a major political party, according to Samut Prakan police inspector Sonchai Empradit.

Acting on information provided by the suspect, officers then seized a pickup truck containing about 4,000 100 baht bank notes, a pistol and a book with lists of canvassers' and voters' names, and leaflets profiling an MP candidate.

Mrs Thongphoon, a resident of Muang district, allegedly confessed that she received the 6,400 baht cash from three men in a pickup truck.

...The Australian and British embassies have issued travel advisories for Thailand due to concerns over the possibility of unrest and violence during and after the election and the formation of the next government.

The Australian embassy in Bangkok advised its nationals in Thailand to exercise a high degree of caution.

"There is a possibility of civil unrest and violence in the period surrounding the election and formation of a new government," said a message posted on the embassy's website.

"The political situation remains unpredictable after the last April-May incident and further political unrest and violence cannot be ruled out in Bangkok and other provinces," it added.

The British Embassy posted a travel advisory on its website on Friday regarding the "possibility of unrest in parts of Thailand during national elections."

"The Election Commission has until Aug 2 to confirm the election result. There remains a risk that political developments may lead to violence," it said.

Bangkok is an incredibly cosmopolitan city. Look around a Skytrain car and you always see people from every continent. If election season is a dangerous time, tourists and ex-pats don't seem to be paying any attention. Thais have a different perspective: 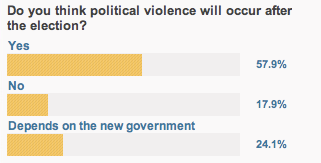 UPDATE: People Are Voting Now-- But Not Tweeting


Thai election law prohibits sales of alcohol and all political campaigning-- so not just Facebook and Twitter but the law covers the too-- from 6:00 pm the day before a vote until midnight of the election day, even though voting ends at 3pm.

Police on Saturday warned election candidates and citizens not to use web media such as Facebook or Twitter to campaign for the election-- or risk going to jail.

Thai policemen and officials give a final check to ballots and ballot boxes.

"Any candidates or even ordinary people who convince others to vote for someone face a six-month jail term or a 10,000-baht fine ($324) or both," he said.

Posted by DownWithTyranny at 6:44 PM