Whither The Egyptian Tourist Industry? 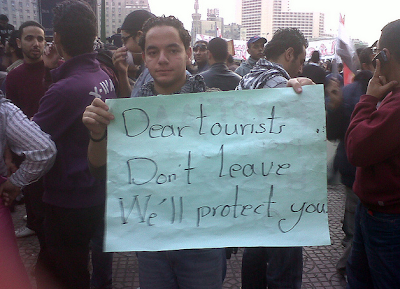 The #1 concern among one subset of Americans in regard to the revolution against brutal, grinding dehumanizing tyranny in Egypt has nothing to do with Egypt's 80,000,000 mostly impoverished people, It's all about Israel. Well, relax... Mohamed ElBaradei was on Meet the Press today and he vows that the peace treaty is rock solid. And then there's the tourism-- which accounts for at least 7% of Egypt's GDP. Americans didn't get as crazy about Mubarak thugs riding through Tahrir Square killing peaceful protesters as they did about Mubarak thugs breaking into the Egyptian Museum on the same square breaking some artifacts. "People can be replaced," one American told me. These treasures can't." I wanted to vomit.

The Egyptian economy is incredibly bound up with tourism-- and the balmy winter is the high season. In a country with rampant, systemic unemployment, one job in 8 is a tourist industry job. Since the protests began, a million tourists have left the country and Egypt has lost at least a billion dollars in evaporated tourist revenues. That's massive. I was shocked that until there was actual blood flowing in the streets both the U.S. State Department and its British counterpart were working to bolster Egypt's economy by falsely claiming tourism was perfectly normal and non-problematic. In a matter of one day, they went from "Everything's wonderful; have a good time and be careful of sunburn" to "Get to the airport for an emergency flight out immediately." I was shocked that both the U.S. and British governments would put Egypt's tourist industry ahead of the safety of their own citizens.

Today's L.A. Times reports that despite the catastrophic effect of the drop off in tourist revenues "some Egyptians whose livelihoods depend on the tourist trade are sympathetic to the protesters' cause."

In the fragrant confines of the California Perfumes Palace, within view of the Giza pyramids, Ahmed Ali uncorked his scented wares-- "Try the Cleopatra oil!"-- and talked of the need for change.

"It's bad for us," he said of the tumult. "But it's a happy time for the people. In the end, Egypt will be a stronger country, a better country."

Egypt's vice president, Omar Suleiman, told state television last week that the ongoing unrest had cost Egypt $1 billion in tourism revenue. Some analysts thought that estimate was a conservative one.

The State Department advised U.S. citizens to avoid travel to Egypt and to leave as soon as they could do so safely. Over the last six days, about 2,300 Americans have crowded aboard evacuation flights organized by the U.S. Embassy in Cairo. Commercial flights, which were disrupted at the height of the turmoil, are flying in nearly empty and flying out full.

In some parts of the country, the events unfolding violently in the capital seem a world away, and tourist operators would like their clientele to think of them that way.

At one hotel in the Red Sea resort of Sharm el Sheikh, guests noticed that a few days into the protests, a big flat-screen television disappeared from a coffee nook just off the opulent lobby. Waiters explained it was broken.

The tourist economy has bounced back from hard times before. In 1997, Islamist gunmen massacred dozens of foreign tourists in Luxor, causing an initially dramatic drop-off in visitor traffic, but the industry eventually recovered. In April 2005, a suicide bomber struck near a souk in Cairo popular with visitors from abroad, killing three foreign tourists.

This morning the Associated Press chronicled the crumbling state of Egyptian tourism over the past 12 days, pointing out that major carriers like Delta and even EgyptAir have stop flying between the U.S. and Cairo and that travelers have been canceling their plans en masse. 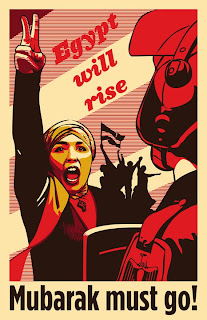 Travelers faced the same question as Rob Solow, who is booked on an Egyptian getaway this month with his wife. “Is it going to be an issue where we are going to have to watch our backs the whole time?”

The Yorktown Heights, N.Y., couple aren't sure if they'll make the trip. But Solow said he won't be going to the Middle East in the future: “I just think it's a troubled part of the world that's not necessary to visit.”

The timing of the violence and political uncertainty couldn't be worse-- winter is the high season for visitors. Large tour operators such as Gate 1 Travel and cruise companies including Norwegian Cruise Line have canceled Egyptian stops. Tours elsewhere in the Middle East haven't been canceled, but travel agents are getting a steady stream of inquiries about the status of trips.

“The ones who haven't booked are holding off and the ones who have are trying to get out of it,” says Blake Fleetwood, owner of several Cook Travel businesses in New York.

...Jordanian economist Hani Horani said: “Foreign tourists look at the Middle East as one entity and they will avoid traveling to an area they consider unstable.”

One view is that Egyptian tourism-- which probably started a couple hundred years before Christ when Greek travelers made their way to ancient monuments-- has an uncertain future. Another view takes the exact opposite view-- that this is a good time to go to Egypt-- or at least certain parts of it. In 1997 Roland and I arrived in Cairo the day after dozens of Swiss, Japanese and other tourists were hunted down and massacred by extremists inside the Temple of Hatshepsut at Deir el-Bahri right across the Nile from Luxor, the second most important tourist area after the Pyramids and Sphinx complex at Giza. We pretty much had the whole tourist infrastructure to ourselves and it was awesome. But now, all the important historical and cultural sites are shuttered. If you like surf and sun and cheap, gaudy hotels in a cultural wilderness, though...

Contrary to popular belief, tourism is not dead in all of Egypt. The situation in the popular Red Sea destinations of Sharm el Sheikh, Hurghada, Taba, and Marsa Alam remains “safe” with hotels operating “business as usual” according to Thomson Travels.

Although the British Foreign Office has advised its nationals against all but essential travel to Cairo, Alexandria, Suez and Luxor, British tour operators offered a string of promotions this week on holidays in Egypt's Red Sea resorts which remain popular with holidaymakers despite unrest elsewhere in the country stressing that they are far from the main flashpoints.

Thomas Cook has a one-week holiday in an all-inclusive, four-star Sharm el-Sheikh hotel at £319. First Choice is offering a two-week holiday in the resort from £359 flying from London. Thomson has flights seats at £79 on a one-way flight from Edinburgh to Sharm el-Sheikh, and return flights from Manchester at £159 leaving Wednesday for 10 days in the resort. Other return flights from Britain to Red Sea destinations were priced at £149 with some flights nearly full.

The two biggest tour operators in Britain, Thomas Cook and TUI Travel, which runs Thomson and First Choice, offered several deals to the Red Sea. A spokeswoman for TUI Travel said that Sharm el-Sheikh "operates like a country in itself," run separately from the rest of Egypt, with one main road in and low unemployment due to the tourism industry. TUI Travel also said that there had been no incidents related to the uprising in the Red Sea resorts, where it was "business as usual."

"The atmosphere is quiet and calm, with Sharm el-Sheikh's main resort of Naama Bay bustling as people continue to enjoy their holidays as normal," the spokeswoman said. “The curfew is only imposed in Cairo, Alexandria and Suez. It is not being enforced in any Red Sea resort to which we operate. Booking conditions to Sharm el Sheikh, Marsa Alam, Taba and Hurgharda remain as normal”-- in other words, if you cancel your trip, you will lose most or all of your money. Thomas Cook is taking the same line, saying “no tourist areas at the Red Sea have been affected in any way by the recent demonstrations.

I wouldn't trust any of this as far as I could throw it. Of course, there is another reason some intrepid travels might want to go to Egypt now-- to witness the rebirth of a great nation as it struggles for its dignity and for its future generations against the forces of tyranny. You can't order one of those packages up at Thomas Cook everyday.

Egypt is bracing for a cratering economy but one tour operator, probably an optimist, said he expects "a return to normalcy by the end of the month." Others say March and some say April... or October.

Earlier this week, the Associated Press reported monuments and museums around Cairo were deserted. The Pyramids of Giza reopened to tourists on Wednesday after a 12-day closure, but few people came to visit.

The Egyptian Museum in Cairo-- next to Tahrir Square in Cairo, where many of the most heated political protests have taken place-- remained shuttered, though officials vowed to reopen "after the strike is finished."

Egypt relies heavily on the tourism industry. Last year, the country had 14.7 million visitors, who generated $11 billion in revenue, according to the Egyptian Tourist Authority in New York. That number is about 11 percent of the total gross domestic product for the country.

Before Mubarak's resignation, tourism officials had predicted a quick turn around once the political turmoil quiets down.

"Looking back to previous crises that hit this industry in the last decade, one can tell that the current crisis, despite all its negative effects on our business, will be and should be the fastest to fade and the least harmful of all," says ElSayed Khalifa, consul-director of the ETA in New York.

"People are now looking at Egypt as a more competitive destination because of the exchange rate," Kamel tells Bloomberg. "And during crises, more concessions are made to tourists to get business jumpstarted."

Posted by DownWithTyranny at 10:00 AM