Ready For That Trip To The Paris Of The Middle East? Or Is Lebanon Suddenly Not That Alluring?

Everybody has always told me that Lebanon is beautiful and a "must see." Roman ruins, Crusader castles, churches, mosques, a bustling night-life, ski-slopes, Mediterranean beaches and awesome cuisine... have all helped to make Lebanon a well-trod tourist destination. A long, long civil war, on the other hand, had all but destroyed that key sector of the economy (once accounting for 20% of GDP) before it started creeping back up again. In fact, just last weekend, the NY Times listed the 41 best places to visit in 2011 and conspicuously not tucked in among trouble spots like Cali (Colombia), Tunisia, Loreto (Mexico), Tlemcen (Algeria), Kosovo, the Republic of Georgia, the Kurdish part of Iraq, Port Ghalib, Egypt, where sharks have been eating tourists lately, and Miami... not a peep about beautiful Lebanon which just a few months ago the Times was pushing as a foodie paradise.

more than 30 years of civil war, invasion and occupation, Lebanon is prospering again, and the downtown area of Beirut, the capital, has risen from the rubble. Among more than 400 projects are a new waterfront area, parks, world-class hotels, high-end shops and restored monuments, churches, mosques and even the synagogue.

And to help the city reclaim its title as the Paris of the Middle East are more than 100 restaurants, some involving notable chefs and restaurateurs.

“We are bringing in world-renowned chefs to make Beirut the food capital of the Middle East,” said Joseph Asseily, chairman of Beirut Hospitality, a division of Solidere, the Lebanese company in charge of the downtown development.

Joël Robuchon, Yannick Alléno, Antoine Westermann, the Parisian baker Eric Kayser and perhaps even Jean-Georges Vongerichten are among the marquee names poised to draw tourists and cosmopolitan locals to the once devastated quarter.

Yesterday's Times had a different kind of Lebanon story, the collapse of the country's-- more or less-- democratically-elected government. 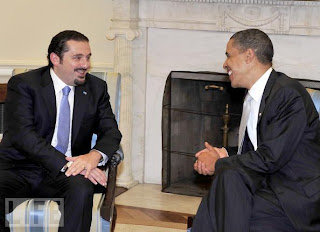 Hezbollah and its allies forced the collapse of the government here on Wednesday, deepening a crisis over a United Nations-backed tribunal investigating the assassination of a former prime minister.

Eleven of the cabinet’s 30 ministers announced their resignations, a move that dissolves the government. They said they were prompted to act by the cabinet’s refusal to convene an emergency session to oppose the tribunal, which is expected to indict members of Hezbollah.

Ten of the ministers announced their resignations just as Prime Minister Saad Hariri was meeting with President Obama in Washington. The opposition had hoped that all 11 ministers would resign together, to bring down the government at that time and expose Mr. Hariri to the maximum embarrassment.

...Hezbollah and its foes have wrestled over the direction of the small Mediterranean country since the former prime minister, Rafik Hariri, was killed in a bombing along Beirut’s seafront in 2005. Twenty-two other people died in the attack. Since then, the tribunal has investigated his death and is now widely expected to indict members of Hezbollah, the country’s powerful Shiite Muslim movement.

Hezbollah has denied involvement and denounced the tribunal as an “Israeli project.” It has urged Prime Minister Saad Hariri, the slain man’s son, to reject its findings. Mr. Hariri, who has so far resisted the pressure, cut short his visit to the United States in order to return early to Lebanon and deal with the widening political crisis.

There has been a sense of inevitability to the resignation by cabinet ministers allied with Hezbollah. For months, Hezbollah has warned that it would not stand by as its members were accused of involvement in the assassination of Mr. Hariri’s father. Though it is technically part of the opposition, Hezbollah joined a unity government formed after elections in June 2009. It has emerged as the single most powerful force in the country, aided by its alliance with a powerful Christian general and the fracturing of its foes.

In contrast to 2005, Hezbollah’s adversaries-- gathered around Mr. Hariri-- have fewer options and less support than they once did, emblematic of the vast changes in Lebanon’s political landscape the past few years. While the Bush administration wholeheartedly backed Mr. Hariri and his allies then, President Obama has not pledged the same kind of support. Syria, whose influence was waning in 2005, has re-emerged in Lebanon, and even its detractors here have sought some kind of relationship with it. Most Lebanese also vividly recall the speed at which Hezbollah and its allies vanquished their foes in just a few days of street fighting in Beirut in May 2008.

“Who are your allies these days?” Sateh Noureddine, a columnist with As-Safir newspaper, asked of Mr. Hariri’s camp. “You are going to get beaten on the streets and you will not be able to respond.”

The decision to resign came after the collapse of talks between Saudi Arabia and Syria aimed at easing the political tension. The two countries have backed rival camps in Lebanon since 2005 and their initiative was seen across the political spectrum as the best chance to end the stalemate. But Tuesday night, Michel Aoun, a former general and Hezbollah’s Christian ally, announced the two sides were unable to reach an agreement.

The father of Saad Hariri, Rafik Hariri-- then Prime Minister-- was assassinated in 2005 and the fragile coalition he's headed since 2009 couldn't withstand demands by the Shi'a Hezbollah movement to denounce the tribunal (which would have been political suicide for himself in the context of the Sunni community, his base). His only backing comes from the Saudi royal family but they didn't back him strongly enough to pressure Hezbollah's masters in Syria-- at least as implicated in the assassination as Hezbollah-- to call off their dogs. There is no good outcome to this mess. And the likelihood of me ever visiting Lebanon has further diminished. Damascus seems more likely.
Posted by DownWithTyranny at 8:00 AM