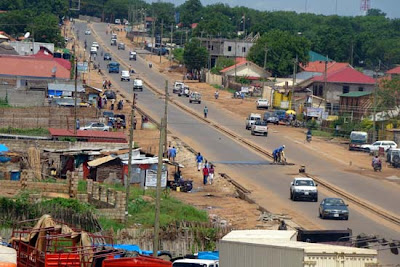 I just keep going to Morocco again and again. True, I once spent a month in Egypt, but when it comes to North Africa I fell in love with Morocco in 1969 and was just there again-- maybe the 15th time?-- for most of December. Roland is always bringing up Tunisia and Libya (not to mention Ethiopia and Mauritania, where as many as one-fifth of the population are still slaves) as places we should go. We drove down an endless rutted road to sleepy, art-deco Sidi Ifni once and we spent a month in Mali once, but that's about as close as I'm getting to Mauritania and I don't care how groovy the beach is near Nouakchott or how ancient Ouadane, Chinguetti, Oualata and Tichitt are.

I read Skeletons on the Zahara, about Americans who were captured and made into slaves there and I'm staying away. Even if Algeria isn't, Tunisia has always been a lot more plausible and Europeans flock there, mostly for the shiny new beach resorts around Monastir, especially the cheap ones catering to pachae-tours-- although I have to admit I've always been captivated by the history of Carthage. Tunisia has been trying hard to develop tourism as a major economic sector and as many as 11.5% of the population depends on it for their livelihood. It's overrun with Libyan, French, German, Italian and British tourists; plenty of Eastern Europeans have also been coming but Americans stay away. With the uncertainty of this week's events, Americans are likely to stay away for the immediate future even more resolutely. Russia just evacuated all its nationals today and the uprising devastated the tourist industry... at least for now.

While most Tunisians celebrate the victory of the people in ousting Dictator Zine El Abidine Ben Ali, the country's key tourism industry sees a large negative impact from the riots and revolution. Tourists are already being evacuated from Tunisia.

While President Ben Ali was a totalitarian leader, tourists from Europe and the Arab world kept streaming to the country at an ever-increasing rate. Only few of the arrivals did even know that Tunisia was a dictatorship, even if they came year after year. Superficially, Tunisia seemed a country in balance.

This widely held picture of Tunisia as a peaceful and safe Mediterranean destination has been completely tarnished during the last week. The Tunisian revolution has been followed closely by media in all of the country's main markets.

With the state of emergency declared in all of Tunisia, and with the unclear political situation after the fall of President Ben Ali, governments from Spain in the south, via Switzerland, Germany and the UK, to Norway in the north have issued travel warnings for Tunisia.

In the case of Tunisia, the development has been even more dramatic for the travel industry. Borders, including the Tunisian air space, were closed this afternoon, preventing tourists from entering or leaving the popular destination.

Reports from Tunisia indicate most foreigners on holiday in the country are reacting with relative calm to the ongoing political turmoil. Although the death of a Swiss-Tunisian woman-- who was shot as she watched the protesters clashing with police from her second floor balcony-- has led to an unease among many travellers.

The unsafe situation has prompted several tour operators to consider an evacuation of charter tourists. British operator Thomas Cook has already started repatriating 1,800 holidaymakers, the company stated today. Six extraordinary flights have been ordered to organise the evacuation, although the closure of Tunisian air space may complicate the operation.

Also some German and Belgian tour operators have made arrangements to evacuate their holidaymakers. The move followed a call by the German Foreign Ministry saying tourists in Tunisia could demand an earlier return given the dangerous situation.

Meanwhile, one cancellation after the other is ticking in, with tour operators and ordinary airlines cancelling most planned trips to Tunisia for the weeks to come. Even cruise ships have started announcing cancellations of stop-overs in Tunis.

A longer downturn in the tourism sector due to continued turmoil therefore would deepen the social problems related to a high unemployment rate in the country. These social problems were the direct cause of the protests starting in December, which led to the political riots that finally led to the fall of President Ben Ali today.

Tunisia, along with other North African countries, has experienced impressive growth rates in its tourism sector during the last decade, even during the financial crisis. The sector was among the most promising to further reduce unemployment in the country, with many new resorts being planned along the country's Mediterranean coast.

The week long successful-- and relatively peaceful-- referendum, which is resulting in independence for southern Sudan, on the other hand, offers intrepid travelers a new destination that few have seen. The oft-repeated thing about tourism in Sudan: it's hard to get in but if you manage to, you can visit some awesome tourist attractions without ever seeing another tourist. All through Sudan the people are reputed to be among the friendliest and most hospitable on earth. Travelers are still a novelty for the people there so they are really as excited to experience you as you are to experience them. On the other hand, you can't use American credit cards there and in the South, there is malaria, deadly "drinking" water and poisonous spiders and snakes to worry about.

But you can fly into Juba directly from Nairobi, Cairo, Entebbe and Addis Ababa as well as Khartoum. Juba, the capital of the world's newest country, is small enough to walk all through in a day. Trip Advisor readers recommend 3 hotels and 3 restaurants but Juba is going to be a boom town really fast now and things are going to get crazy for the next year. Remember, Southern Sudan-- like Mauritania-- was predominantly a source of dark skinned slaves for lighter skinned Arabs. There's a lot of change that will be happening in the new nation now.

A tribal chief preferred not to ponder the meticulous nature of turning aspirations into a nation: "Look at those happy men over there," said Yout Manyual. "They have been here for three days and every night they dance with drums until morning. This is our right until all the votes are counted. We know then that development will come and children will be taken to school."

Beyond the roadside money-changers and the old army trucks half buried in the dirt, Dr. Hassan Awule made rounds at the unfinished Morobo Clinic he started during the war. He said life would improve in coming years but worried that corruption and tribalism-- the spoilers of many African nations-- might jeopardize a new country. As a lizard scurried up a wall, he opened the door to what he hopes one day will be an operating room.

"We began with just a pharmacy," he said. "Then we added one bed, then two, then three, and now we have 40 beds. They are not enough. We are treating malaria, typhoid, HIV, intestinal worms and infection. Many families can't afford care so we give them credit. You can't turn them away."

Children lay curled next to mothers, two women cut squares from a roll of gauze, and thin men slept on beds in tiny rooms and hallways. The dry season has left the clinic's well nearly empty and Awule pays money he barely has for water trucked in from the river. A genial man with a shaved head and a mercurial demeanor, the doctor said that one day he would open a pediatrics unit and a morgue.

"We had slavery," he said as a stray cow grazed outside his fence, "and now it's time for liberation."

The word "slavery" echoes in the south, seared into the public consciousness, an heirloom that makes independence sweet, if undefined. Southern Sudanese are more eloquent in explaining past persecutions and wars wrought by the Arab-controlled north than they are at rhapsodizing about the future. They know only that it's out there, and should soon belong to them.

Don't forget your Bradt Guide.
Posted by DownWithTyranny at 9:00 AM

Great blog thanks for sharing
Infolx