Madagascar Might Be A Great Place To Visit... But Not This Month 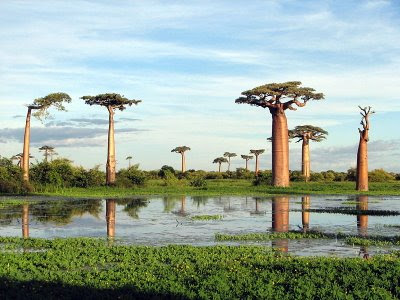 There aren't that many places left in the world that Roland and I both haven't been to and both want to go see. This summer we're going to Russia, which took me over a decade to convince him was "worth seeing." And the following Christmas we're planning on Syria now they he's convinced me that you can rent a riad in Damascus. But we're revisiting an awful lot of places-- Marrakech in a few weeks, which I've been to more than a dozen times and trips to London and Amsterdam where I not only visted but lived in. And he want to go back to Sri Lanka, Thailand, Myanmar and Indonesia. In the never visited category, I'm pushing for Antarctica, Brazil, South Africa, and the Silk Road towns of Bukhara, Samarkand, Khiva, and Kashgar and Roland wants to go to Mysore and Kerala in India, Tibet, and Algeria. We're both leaning towards Madagascar. Why Madagascar?

Well aside from the fact that neither of us has ever been there, Madagascar is one of the more unique places on the planet, in some ways a world unto itself. Because the gigantic island, 4th largest in the world, isn't really near anyplace else, it's flora and fauna developed on its own and the biodiversity is spectacular with endemic species from birds to lemurs.

Unfortunately, there was another coup d’état last week, which, among other things, is having an unfortunate impact on the recently thriving tourism industry. Yesterday's NY Times seemed to signal the insurrectiuon is over, or almost over, although I'm glad we're going there in 2 years, not 2 weeks.

Hundreds of soldiers loyal to Madagascar’s High Transitional Authority-- the internationally isolated government formed by Andry Rajoelina, who became president with the military’s backing last year-- converged on a base here near the airport, where about 20 mutinous officers had been staying since Wednesday. Officials said talks were planned, but shots could be heard inside the base.

Col. Julien Ravelomihary, a high-ranking member of the High Transitional Authority’s military, told reporters that the officers were “ready to hand themselves over, but junior officers are resisting.”

On Wednesday, the officers declared they were taking over from Mr. Rajoelina, who toppled an elected president in 2009 after months of violent protest. Western powers and Madagascar’s African neighbors have accused Mr. Rajoelina of trampling on democracy, and some in the military have grown disenchanted with him.

After a brief warning about the lack of political stability, the Lonely Planet waxes enthusiastic in the extreme about Madagascar, pointing out that there's no place like it on earth.

In fact, all things considered, it barely qualifies as part of Africa: the two are separated by hundreds of kilometres of sea and 165 million years of evolution-- long enough for Madagascar’s plants and animals to evolve into some of the weirdest forms on the planet. Nowhere else can you see over 70 varieties of lemur, including one that sounds like a police siren, the world’s biggest and smallest chameleons, and the last stomping ground of the elephant bird, the largest bird that ever lived. Near Ifaty in Southern Madagascar you will see forests of twisted, spiny ‘octopus’ trees and in the west, marvel at the bottle-shaped baobabs, especially the Avenue du Boabab near Morondava. And be on the look out for the carnivorous pitcher plant found around Ranomafana, there are over 60 varieties of them. Not for nothing is Madagascar regarded as the world’s number one conservation priority.

And the people are no less interesting: arriving here some 2000 years ago along the Indian Ocean trade routes, they grow rice in terraced paddies, and speak a language that has more in common with their origins in Southeast Asia than with the African continent. Their culture is steeped in taboo and magic, imbuing caves, waterfalls, animals and even some material objects with supernatural attributes. Hill peoples live in traditional multistoried brick houses with carved balconies and, in some areas, dance with their dead ancestors in the ‘turning of the bones’ ceremony.

Throw in a soupçon of pirate history, coastlines littered with shipwrecks, great regional cooking, some of the world’s longest place names, and unfailingly polite and friendly people, and you’ll experience a refreshing take on the overused ‘unique’ tag.

Email ThisBlogThis!Share to TwitterShare to FacebookShare to Pinterest
Labels: Madagascar

Ohh, with your descriptions of Madagascar, I would want to know more information about the island. Very interesting place and seems to be one of the unique places i can ever see. (when ever i get there)

Great article your posting in your blog and it giving me places to visit next.Your also visit the Asia country but you never mention Malaysia. I'm from Malaysia and we also have places you can visit that can leave you breathless. Check my blog at- http://best2knowall.blogspot.com/ or your can search in the internet.We are a tropical climate country with friendly local, multi races, multi religion (even Christian), peaceful and cheap.Come and give us a visit.

Thanks and have a nice day.