How Safe Is It For Americans To Visit Dakar In Senegal And Bamako In Mali? 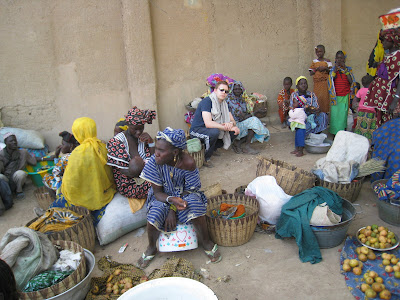 Mali feels very safe all the time
Conventional wisdom is that Bamako is uber-safe and Dakar is infested with pickpockets... but otherwise pretty safe. First Dakar: you can certainly feel confident about walking down a dark street in the middle of the night without being molested. The people are outgoing and friendly and respectful. The vibe is extremely amiable and for the week I was there I never ran into anyone who had experienced any pickpockets or who had heard of any-- other than in old guide books. That doesn't mean it doesn't exist, but I sure never saw anything to indicate that it does. I should mention, though, that unemployment is high-- like around 60%-- and that on the surface, aside from lottery ticket sellers, it looks like the main job in Dakar is private security guide.

Obviously you don't throw caution to the wind and run around with a fat wallet sticking out of your back pocket. In fact, I've been wearing a money belt under my arm in lieu of a wallet. I guess I would rate Dakar as very safe for tourists of all ages-- except for the mosquitos. You can't avoid them-- not in Senegal and not in Mali. Ex-pats I spoke to in both countries have told me that they can't take the poisons that western medicine prescribes and that most bites don't result in malaria-- or even Dengue Fever-- and that when you get it you rest and eat well for a week and then you're fine. Healthy people don't die from malaria any more than they die from the flu. Personally, I'm still taking the accursed Maladon.

I'm pretty cautious about what I eat and drink-- including in the U.S.-- and I found Dakar and Bamako safe foodwise as well. I pretty much don't eat in dodgy-looking places and stick to bottled water-- including for bushing my teeth. It's hot as hell here and it's important to keep well hydrated. I met a French woman who lives in Bamako 5 years and says she drinks the water here and has never had a problem.

As for the safety factor in Bamako, as "scary" and foreign as it looks, it would be far harder to imagine a crime against a person here than it would be in L.A. or NYC. On the other hand, you could step into an open trench or an uncovered manhole. And for those who define "safety" as breathing air instead of exhaust funes... well, there's a real problem. Someone e-mailed me and asked me if there is any danger from lions or other predators. I think the Malians ate them all. There are a lot of birds and I hear there's a huge herd of elephants between Dogon country and Timbuktu-- and some hippos (which the Malians are wisely quite afraid of)-- but the only wild animals in Bamako are in the zoo. I've walked all over the city, including to really remote areas without paved roads or the blessings of any kind of modernity, and the only vibe is friendly, friendly, friendly. People are unimaginably poor but this is a Moslem country and the level of personal ethics is very high.

I might also add, there are American flags everywhere and people walk around with Obama t-shirts! This has got to be one of the safest cities for tourists I've ever visited anywhere.
Posted by DownWithTyranny at 1:00 PM