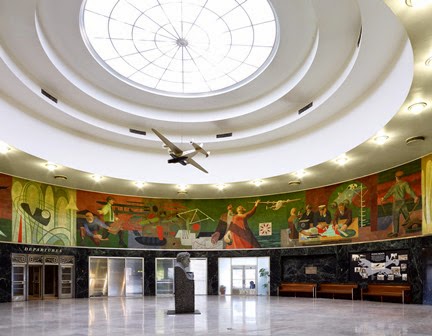 "Recent restoration efforts, most notably the uncovering of the interior mural 'Flight,' have further enhanced the architectural significance of the building, which is not only a major example of a new building type in the 1930s, but also a superb example of the Art Deco style."

-- from the November 1980 LPC Designation Report on the
"Marine Air Terminal, LaGuardia Airport" -- designated
that year as both an individual and an interior landmark

I don't usually go looking for trouble across the decades, but sometimes the trouble finds you. So it was for me Sunday at one stop on a monumental all-day art deco hunt promoted by the Art Deco Society of New York as part of its contribution to the celebration of the 50th birthday of New York City's Landmarks Preservation Commission, which as it happens happened on Sunday. It hardly seems necessary to add that presiding over the epic journey was architectural historian Anthony W. Robins, because while Tony put in 20 years at the LPC (serving as director of the Survey department and deputy director of Research), and among his many writings are books about the World Trade Center (both the original 1987 edition and an updated 2012 one) and Grand Central Terminal (2013), to a lot of people he's NYC's Mr. Art Deco. (I myself have done a bunch of deco-themed Municipal Art Society walking tours with him.) For Sunday's odyssey he had plotted art deco targets in all five boroughs, which we reached by bus.

It was an undertaking that by its very nature was bound to enmesh us in a clash of decades, since while all of our sites dated back to the art deco heyday of the '30s, in the history of buildings time never stands still. We saw some that -- some with and some without the benefit of landmarking, and with various combinations of stalwart upkeep and committed restoration -- have stood proudly over those decades, notably apartment buildings on the Upper West Side of Manhattan, in the West Bronx, in the Brighton Beach section of Brooklyn (including the vast Brighton Beach Gardens complex, which offered hot and cold running water not just of the regular kind but of saltwater as well, via pipes tapping into the nearby ocean), and even on Staten Island (the Ambassador Apartments, sitting not just surprisingly but comfortably on the slopes of St. George). 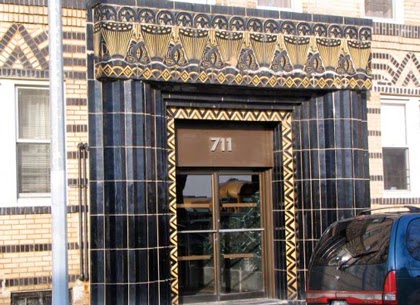 We also saw the really fine recent rehab and rebuilding job done by the Parks Department on the sprawling McCarren Play Center and swimming pool in Brooklyn, one of 11 such centers built citywide in the '30s by then-Parks Commissioner Robert Moses. It was finally landmarked in 2007, but by then had suffered decades of neglect -- before being restored to glorious function in 2012 servicing the Williamsburg and Greenpoint communities.

But we also saw buildings that had endured only unkindness at the hands of time, like the former Knickerbocker Laundry building in Woodside, Queens, once proclaimed the most beautiful industrial building in Queens, of which a section remains visible buried under a monstrosity of a building erected on top and around it as a headquarters of the Korean Presbyterian Church of New York.

Even more poignantly, we saw the surviving shell of the once-beautiful Fire Service Pumping Station on the northern (i.e., land-facing) shore of Brooklyn's Coney Island, abandoned by the Fire Department in the early 1970s and never repurposed by the city. It was actually calendared for landmark consideration by the LPC in 1980, but before its hearing time came it suffered a siege of vandalism so extensive that the commissioners were left with really nothing landmarkable -- though it was at least possible to rescue the stone lions that had once watched over the entrance, which despite damage were intact enough to warrant safe removal from the site and are now housed in the Brooklyn Museum, forlornly awaiting a likely never-to-come return to their home, which seems doomed to continue deteriorating to the point where there's no practical alternative to demolition. 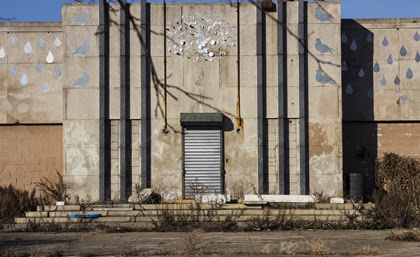 It was a wonderful trip through time as well as geography, and also through urban values and priorities. But the site that left the most indelible mark for me was the interior of the Marine Air Terminal of LaGuardia Airport, on Flushing Bay in Queens, home at the time of its opening to the might Clipper planes that crossed the world's oceans in added safety thanks to their design as seaplanes. It's a beautiful little art deco building in its own right, the Marine Air Terminal, well worthy of the landmark status it received in 1980. But at that time it was designated not just as an individual landmark but also as a much rarer interior landmark, largely on the basis of the wonderful WPA-sponsored murals called Flight, painted by James Brooks in 1939-40, the last mural project commissioned and completed under the WPA, filling almost 360 degrees' worth of the second level of the interior wedding-cake-shaped main portion of the building. 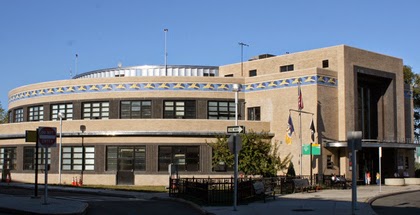 Which brings us to a clash of decades that is first appalling and later somewhat hope-restoring, though it's the appalling one that has lodge in my memory, because it's the sort of Tallibanesque act of official vandalism that seems to me quintessentially American and perfectly in tune with the Talibanesque impulses of the American Right of the 2000s. Here's how Harriet Baskas tells the story in an October 2013 post based on Glenn Palmer-Smith's then-new book Murals of New York City: The Best of New York’s Public Paintings from Bemelmans to Parrish:


Flight was the last and largest mural produced under the auspices of the WPA and is 237 feet long by 12 feet high and, appropriately enough, tells the story of the history of flight.


The narrative flows from the mythology of Icarus and Daedalus to the genius of da Vinci and the Wright brothers. Pre–World War II aerial navigators are shown plotting their routes with paper maps and rulers. The culmination of man’s dream arrives at the golden age of the "flying boat," when glamorous Pan Am Clipper seaplanes would land on water after a flight from Lisbon, Rio, or any city with a sheltered harbor, and taxi up to the Marine Air Terminal dock.

In 1952, after being on the wall for just a decade, the mural was painted over. It was the height of the McCarthy era and officials at the Port Authority thought the imagery somehow looked too socialist.

“In particular, these self-appointed art critics took exception to the mural’s suggestion that air travel would be available one day for ordinary people and not just the military and the rich,” notes Palmer-Smith.

Lucky for us, the mural had been sealed in varnish and was eventually discovered, restored and finally rededicated in 1980. It’s now listed in the National Register of Historic Places.

When I shared a hasty, hashed version of this story with Howie, he brought up the famous case of the Diego Rivera murals originally installed in the lobby of Rockefeller Center's grand skyscraper, 30 Rock, which were destroyed on orders of John D. Rockefeller Jr. This was appalling too, especially since discussions were underway to remove the murals, which John D. Jr. found so upsetting (for understandable reasons, he really did find them communistic), and relocate them offsite. But it's also different. John D. Jr. had commissioned and paid for those murals, as part of the large quantity of art he commissioned for display around Rockefeller Center, a totally private site. No, he didn't have to destroy the murals, but the fact is, they were his property, and it wasn't hard to see why he didn't want them displayed on his premises.

The WPA murals, however, were paid for by the public and belonged to the public, and were displayed in a public space. Yet some gutless ignoramus of a bureaucrat saw fit to "improve" the Marine Air Terminal by blacking out James Brooks's work. Does anyone believe that such a course of action would be displeasing to the titans of imbecility and intolerance who now constitute the thinkers and seers of the American Right? 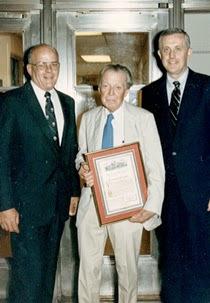 The redeeming part of the story came as the Marine Air Terminal was slogging its way through the landmark consideration process. Largely by dint of the efforts of a heroic advocate, aviation historian Geoffrey Arend, and then with the help of money from Laurance Rockefeller -- yes, a Rockefeller! -- and Reader's Digest's DeWitt Wallace, it was determined that the Flight murals could be restored, and by gosh they were restored! By great good fortune James Brooks was still around four decades after he finished the murals, and after a quarter-century in which his work was presumed gone for good, he, along with Mayor LaGuardia's widow, Marie, was able to attend its rededication on September 18, 1980. (In the photo Brooks is seen between then LaGuardia Airport manager Tim Peirce and Geoffrey Arend.)

It's an unexpectedly, even miraculously happy ending to an awful story that for me has deeply disturbing relevance to the America of the 2010s.