Sure, you've traveled everywhere worth going, but have you been to -- North Korea? 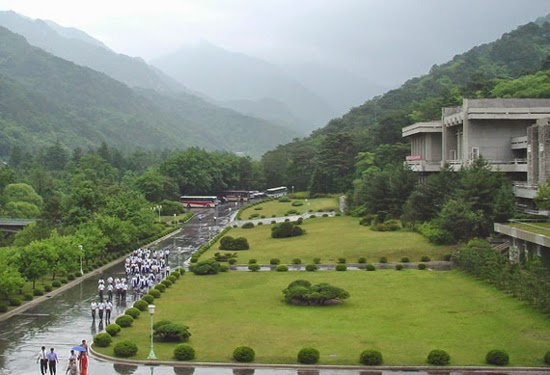 You haven't been to Mount Myohyang (and its scenic parking lot)?

"A lot of people don't know they can even come here, and then when they get here they say it's not what they were expecting. They think it's going to be all doom and gloom and death and sad faces."

If planning your next destination fills you with dread because you've been to everyplace good, and especially everyplace your friends have been to, take heart and think of these magic words:

What? you say. Nobody can go to North Korea, and even if they do, they get arrested and put on trial, don't they?

Apparently that's the old North Korea, except for the part about being put on trial, which is ripped from the headlines. You remember the old North Korea, the surviving Communist outpost that functions as a sort of lockup in the strangling authoritarian grip of a thuggish dynasty of crackpot Kims, a land where the elites live swell and everyone else counts themselves lucky to live, and where, especially, prying eyes are kept out.

No, we're talking about the new North Korea, which is pretty much identical to the old one except that now, Washington Post Tokyo bureau chief Anna Fifield reports from Mount Myohyang ("a beautiful hiking spot about a two-hour drive north of Pyongyang"): "Under a new policy, North Korea has set a goal of luring 1 million tourists, although it has not set a time frame for doing so."


A growing number of Western tourists — called “Europeans” in North Korea, even though they more and more often include Americans — are coming here to see whether this last remnant of the Cold War really is as bad as it’s made out to be.

“I wanted a new experience and wanted to see this place with my own eyes and to form my own views,” said Victor Malychev, a Russian-born telecommunications expert who has lived in Washington for 13 years.

“And I guess I wanted to have a kind of check mark next to it, too,” he conceded while on a tour organized by Young Pioneers, one of the newer travel companies operating in North Korea.

The pioneering tour operators, Fifield reports, "are offering an increasingly diverse array of experiences -- including skiing, cycling and golf." Just think of it, golf thrill-seekers: playing a course that may have been personally enjoyed by the world's least charismatic dictator, Kim Jong-Un.

Mostly, however, it appears that your North Korean funfest will involve a good deal of "traips[ing] around monuments to the Kims and their communist dynasty."


Take Mount Myohyang, a beautiful hiking spot about a two-hour drive north of Pyongyang. The main attraction here, a regular stop on the tourist trail, is the “International Friendship Exhibition” — a six-story marble-floored building constructed to house the 100,000-odd gifts given to North Korea founder Kim Il Sung, who remains its “eternal president” even two decades after his death.

It’s a real rogue’s gallery: Stalin, Mao, Assad, Gaddafi, Castro and Tito, and the tchotchkes they gave Kim. All of them show how much the world adores Kim and his heirs, or so the official tour guides say.

Plus you'll enjoy the special excitement of having your shoes "encased in special covers so they don’t come into contact with the hallowed floors." I bet you're getting goose bumps already!

The million-tourist mark -- over whatever time frame it's projected -- looks to be something of a stretch.


Even those working with North Korea’s tourist industry say this number is “aspirational,” estimating that the country has 100,000 outside visitors a year. The vast majority of them are from neighboring China, which has the advantage of being not only geographically close but also not far removed from communist ways.

Furthermore, tour operators report that the number of Americans visiting the country has dropped noticeably since two American tourists, Jeffrey Fowle and Matthew Miller, were detained in April. Both have been charged with “hostile acts” and Miller is set to go to trial Sunday.

And apparently progress is being made:


Official figures are not available, but Chosun Sinbo, a pro-North Korea newspaper in Japan, reported that there has been a 20 percent increase in foreign tourism in North Korea in the first half of 2014 compared with the previous year, although it did not give numbers.

Simon Cockerell, the British general manager of Beijing-based Koryo Tours, one of the first Western travel companies to start tours to North Korea, estimates that 5,000 to 6,000 “Europeans” a year are visiting North Korea.

Among those who believe increased Western tourism is good for North Koreans is none other than Simon Cockerell of Koryo Tours (who, Fifield notes, "is about to make his 140th trip to North Korea") With reference to the long history of propaganda to which North Koreans have been subjected demonizing foreigners, he says, "The value of exposing as many North Koreans to as many foreigners as possible is inestimable because their image of foreigners is so negative."

IT'S ALL ABOUT THE MONEY

Of course it doesn't seem likely that reeducating its citizens is among the motivators for the North Korean regime's sudden new enthusiasm for foreign tourism. What, then, might those motivators be?


Tourism is something of a risky proposition for North Korea. The regime has survived for decades by shutting off the country from the outside world, strictly controlling the information its citizens receive so that it could uphold the notion that North Korea was paradise on Earth.

But it also brings in much-needed revenue for the state. Although North Korea is one of the poorest countries, tours here don’t come cheap. An eight-day cycling trip organized by Uri Tours this month costs $2,850.

Andrei Lankov, described by Fifield as "a North Korea expert at Kookmin University in Seoul," sees the regime's logic: “For decades, the North Korean leaders have been engaged in a hectic -- and usually unsuccessful —-- search for some ways to get easy money without changing the system and/or creating political risks for themselves." But he doubts that there will be enough demand among foreign tourists to stay in what he describes as an "uncomfortable ghetto" to register a significant payoff for the regime.


“So far, the major attraction of the country for the Westerners is its political weirdness: It is a place to go and then boast to their buddies about this exploit,” Lankov said. “But I do not think 1 million admirers of this extreme tourism can be located every year.”

For the moment, they'll have to be recruited from the ranks of tourists like Young Pioneers tour-taker Victor Malychev, the Russian-born but now Washington-based telecommunications expert we heard from above explaining to Fifield that he wanted "to see this place with my own eyes" -- and maybe "have a kind of check mark next to it, too."

As Fifield points out, on your North Korean jaunt you can expect to be closely minded by official minders, and "tourists are never going to see labor camps where as many as 120,000 political prisoners toil, or the villages where children don’t get enough food because it has been diverted to the military." Still, another taker of that Young Pioneers tour, 26-year-old Felicity Bloom from Madison, Wisconsin, says, "I think I've seen part of North Korea."


I think the idea that we have in the States is that everyone you interact with will be an actor, but it’s not true. We traveled six stops on the metro, and we interacted with school children who were just as curious about us as we were about them.

So what are you waiting for? Get those bags packed, 'cause it's North Korea or bust, right?